A look at the companies demoing live to 1,500+ fintech professionals on May 10 and 11. Register today.

LendingRobot is the first robo-adviser for peer lending. It combines a user-friendly interface with sophisticated, machine-learning algorithms to help individual investors get steady returns.

Golan is a software developer and entrepreneur who loves building innovative products.
LinkedIn

“That’s a word you use with your enemies.”

After two days at Bank Innovation 2015, I’m starting to believe that the fintech industry might be settling into, if not maturity, then at least a pretty responsible young adulthood. And it all has to do with the concept of disruption.

A few years ago, for example, a panel discussion among startups on the future of banking might have sounded very different from what I heard at Bank Innovation’s event in Seattle this week. My takeaways?

Doug Lebda, founder and CEO of Lending Tree, seemed to speak for many presenters when he insisted “we’re all in this together” during his fireside chat Monday morning. For all the talk of disruption and creating beautiful customer experiences in the tech world in general, today’s fintech startups begin their focus on the future with challenges as practical as reducing friction.

As Lebda put it when asked about the next innovation in the space by a member of the audience: “Ease of transaction. Period. Full stop.”
Fintech disruption: What’s your function?
That’s not to say that Bank Innovation 2015 was lacking in the old-fashioned, concept-from-another-planet, disruption department. Ripple Labs CEO and founder Chris Larsen’s offhand remark about micropayments between self-driving cars sent a palpable buzz through the room—and through Twitter at #BankInnovation15. But it was his lucidity on the role cryptocurrencies are likely to play in the real world that was worth the price of admission.

Larsen’s vision is of an “internet of value” similar to the “internet of information” or “internet of data” that we have today. Cryptocurrencies will be key to this ability to exchange value, Larsen believes. But in the same way that the internet of information was built by institutions—from government to academia—the internet of value will be built not by consumers, but by what he called “custodians of value.”
“You don’t have to change the bank’s role or Visa’s role,” Larsen said. He sees Ripple as a “giant pathfinding algorithm for value exchange” that can improve on the current system of correspondent banking by providing financial institutions with real-time settlement, and “atomic,” “go/no go” transactions that are end-to-end traceable.

Technology will always seek to deliver innovation faster than finance can integrate it, as nCino CEO Pierre Naude suggested in the conversation on the future of banking. Bitreserve CEO Halsey Minor added that there was a time when he “didn’t think banks would have to deal with innovation.”

But to the extent that technology helps banks and other FIs become better at “core competencies” and reduce friction the more likely the relationships and collaborations are to be valuable for all involved.
In this way, financial institutions can serve as what iQuantifi CEO Tom White called “advice drivers” just as well as startups can prod FIs toward greater efficiency and serve as testing grounds for new approaches to everything from credit decisioning to customer engagement.
So if banks are getting back to basics of lending, payments and savings, as CBW Bank chairman and CTO Suresh Ramamurthi suggested, there are fintech startups helping make that happen. Alternative lenders are white-labeling products for FIs to sell to their customers, as Lending Club’s Andrew Deringer, VP, head of Financial Institutions Group, pointed out, opening up new cross-selling opportunities. Funding Circle co-founder and U.S. managing director, Sam Hodges, highlighted the “massive need for small business financing” and the role played by startups able to look at risk differently.

This argument was echoed by Emmanuel Marot, CEO of LendingRobot who talked about the development of niche marketplace lending alongside new niche markets. All of it is helping move small businesses up the chain toward the kind of loans banks are interested in and able to profitably make.
It also is about providing better service, something that in the lending business goes all the way to the individual loan officer, as Lebda explained during his Fireside Chat session. “My best loan was when people came up and really talked to me,” he said in response to a question about emotional banking, a theme that would be heard more than once at Bank Innovation.
“This is the future,” added LendKey CEO and founder Vince Passione. “No more waiting. Not just shopping but getting it completed. Not just the coupon for the car. But the coupon for the financing.”
Finovate Alum Wins DEMOvation Challenge 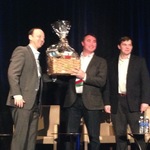 Congratulations to Tom White and the team from iQuantifi. iQuantifi took home Best in Show honors as part of Bank Innovation 2015’s DEMOvation event Tuesday morning. Also participating was authentication specialist and fellow alum, AuthenticID.
DEMOvation featured six companies,
with each providing a brief, eight-minute demonstration of its technology. Attendees voted for their favorites via Bank Innovation 2015’s mobile app. Read more about the DEMOvation challenge here.
More observations from Bank Innovation 2015 coming Friday.
This post will be updated throughout the day as news and developments emerge. You can also follow all the alumni news headlines on the Finovate Twitter account.

Yesterday, LendingRobot received $3 million in funding for its platform that helps individuals invest like pros on P2P lending sites, Prosper and Lending Club. Europe-based Runa Capital led the Series A round.

The new funding, plus the undisclosed amount received in a Seed round last April, brings LendingRobot’s total raised to somewhere north of $3 million.

The Washington state-based company plans to use the funds to add new features, enhance its prediction models, and accelerate growth. 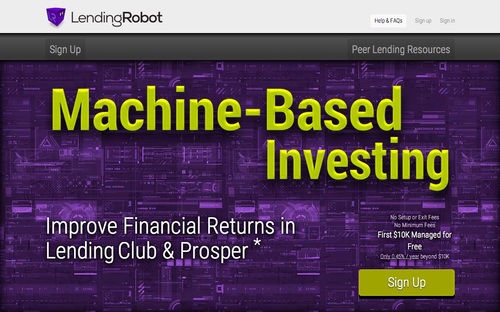 LendingRobot uses an algorithm to invest users’ available balance in their Prosper and Lending Club accounts to get them the best return.

How is this different from Prosper’s QuickInvest or Lending Club’s Automated Investing?

Think of it as Bid Sniper software for eBay-meets P2P Lending. Popular loans are funded seconds after they are posted on Prosper or Lending Club, usually by institutional investors or hedge funds with automated loan investing technology. By the time the average individual makes their investments, often times the best loans have already been snatched up.

Additionally, it offers its 1,000+ users more than 40 filtering criteria to insure their cash is being invested how they want. 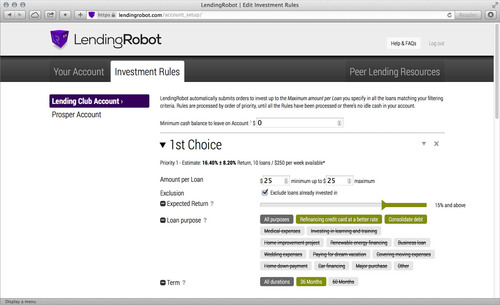 We featured LendingRobot in our Behind the Scenes feature in May of 2014. Check out LendingRobot’s live debut at FinovateSpring 2014.