On Fridays, I try to post a new digital banking feature I’ve recently discovered. But with nothing to report this week, I will instead take the easy route and make a request for a new feature:

BBVA’s Simple has been a leader in adding richness to transaction detail. We reported here on its web-based solution for annotating transaction in late 2012 (see screenshot at top of post). Basically, that capability needs to be ported to email for, forgive me, simpler access.

Bottom line: For me, this would be one of the best things a bank, card issuer or PFM could do to cement my loyalty—and perhaps even cough up a modest subscription fee. I want my transaction history to be both a personal diary, e.g., traveling or dining out; a tax record, for business or charitable transactions; and a searchable resource for future questions, e.g., What did I pay last month for cable?

Note: Hit me on Twitter (@netbanker) if you know someone already offering this.

For several years I’ve used the forward-looking balance feature from Simple’s “Safe to Spend” and Key Bank’s MyControlBanking as a great example of where banking/PFM is headed (see notes 1, 2, 3). But this seemingly vital PFM feature has not been adopted by other major players.

My hypothesis is that banks are (rightly) afraid of the cost (customer service, litigation, fines, CFPB backlash) if it doesn’t work perfectly. The false positive problem is especially daunting (note 3). You tell customers they are good to go and then Monday morning you bounce two of their checks collecting $70 in OD fees.

Enter Yodlee’s version of the forward-looking balance summary, Sense. The service made its industry debut at FinovateSpring last month (video here and below). With 15 years’ experience providing mega-banks with data aggregation and PFM services, it may have the necessary credibility to power forward-looking banking features for its client banks.

Bottom line: Regardless of where the algorithms are sourced, I hope banks come to their senses soon, and offer seamless money-management guidance.

Notes:
1. U.K.’s stealthy banking startup Mongo appears to be working on a similar function.
2. Simple was acquired by BBVA Compass in 2014 for $117 million.
3. Moven provides a compelling alternative-spending feedback/prediction system which is less likely to produce false positives. The neo-bank startup constantly compares your spending velocity with historical trends, to provide a real-time green-light/red-light indicator when you are headed towards overspending (see its FinovateSpring Best of Show 2015 demo here). For extra credit, the Moven app makes it easy to lock away the extra cash saved in the lower spending months.

This morning, Celent’s Stephen Greer published a post called, The Challenges of the New Neo-Bank, wherein he states:

In recent months, the neo-bank model (e.g., Simple, Moven, GoBank) has hit a few stumbling blocks that call into question the promise of the digital-only model…

Stephen lays out four scenarios for the future of neo-banks:

1. Neo-banks are acquired and assimilated into larger financial brands

3. Neo-banking fails to become a viable business model, but nevertheless influences the industry

My thoughts: We already see #1 and #2 happening, so the question comes down to whether we are headed long-term towards #3 or #4. Like most analysts, I’m firmly in the “it depends” camp. But I’ll go out on a limb a bit. I believe we will see dozens, if not hundreds, of neo-banks launch in the next few years. Here’s why: 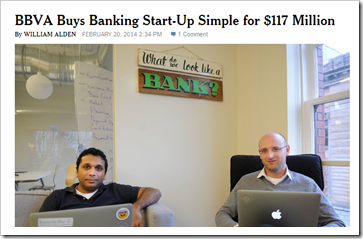 1. Simple’s $100-million exit to BBVA
I’m not sure how much equity the founders held at the end, but it must have been a multi-million dollar payday for five-plus years of hard work. While that’s not enough to make the cover of Forbes, it’s a huge win for most entrepreneurs.

2.  Marketplace lending provides a path to profitability
The problem with the neo-bank model in an era of low deposit rates and shrinking interchange, is that those traditional income sources are not enough to pay competent developers, execs and customer service folk. With consumers loath to pay fees, most startups end up forced into the ad-supported model, which strains their credibility with customers.

But with the growing popularity, and proven profit potential, of marketplace lending (aka P2P lending), neo-banks can partner with or build their own loan platforms to profitably put those deposits to work (sounds less “neo” and more “banking” doesn’t it?). So I envision the day where neo-banks allow you to store your funds in the prepaid account for no interest, or put it to work in a lending marketplace to earn a few percentage points on the funds, with the neo-bank pocketing a bit of the spread.

3. Third-party financial watchdogs become trusted services
Another advantage of being an independent neo-bank is that it’s easier to become an unbiased watchdog over all things financial. The neo-bank can track all your accounts (Mint/Yodlee), find areas where you are overpaying or have potentially been defrauded (BillGuard), monitor your credit score (Credit Karma) and even analyze the effectiveness of your 401k (Brightscope).

Right now, it’s still almost impossible for third-party startups to get to scale because customers just don’t trust them. But that will slowly change as the newcomers gain brand recognition (for example, Intuit’s Quicken, Quickbooks, and TurboTax brands).

4. It’s much, much harder to launch a real bank
Ten years ago, we were seeing about 10 new banks launched every month. Due to all the failures brought on by the Great Recession (and I would argue, way too much deposit insurance), there has only been one new bank launched in the past three years (through end of 2013). So, if you want to get a banking business started, you have little choice but to go with a non-bank model.

Comments? Give me a shout @netbanker

After it was acquired by BBVA in February, Simple is showing the first major sign of access to the mega bank’s deep pockets.

The Portland-based startup updated its iOS and Android apps today to bring users an easier way to pay others via their mobile device. Aside from the redesigned interface, other major changes include: 1) Simple Instant Transfer on mobile
Previously only available on the web interface, Instant Transfer enables users to instantly send funds to other Simple account holders.
2) Updated goal interface on mobile
It’s easier for users to create and manage their goals with the ability to add notes to their goals and easily transfer money into and out of individual goals. It still lacks, however, the function to add pictures to goals.
3) Customized profiles
Customers can customize how other users see them by adding a profile picture (see screenshot on right) to their account. They can also select other Simple customers as favorite contacts.
4) Mail checks from mobile

One of the more notable upgrades, is the ability to mail checks for free to anyone. All you need is their name and mailing address. I tested the feature on my iPhone 5S by sending a check to my mother, who does not have a Simple account.

Note the text at the bottom that indicates both when the money will be withdrawn and when the check will be received. Pulling that information out of the fine print and into plain sight aligns with Simple’s transparent policy. After adding my mom’s address, I entered the amount, followed by the 4-digit verification code that I received via text. Once I entered the code, the $1 had been withdrawn from my account and was ready to be mailed to my mother.

In the U.S., where writing checks is still common, the ability to do it from a mobile device is a very useful feature. Simple could improve it with a few small additions:

1) Option for users to pay for expedited shipment of the check.
2) Optional note field to send with the check that allows users to personalize the payment
3) The ability to assign a photo avatar to contacts who are not Simple customers

Simple launched at FinovateFall 2011. You can check out the demo video here.