The Brand Mapping Database is more powerful than ticker symbol searches since it analyzes unstructured content, such as positive and negative sentiment on Twitter. The database can also pull data from sites such as Reddit, Facebook and LexisNexis. As Likefolio founder Andy Swan describes it, the Brand Mapping Database informs investors “what consumers are doing on Main Street before it hits Wall Street.”

The licensed version of the Brand Mapping Database will deliver insights into firms’ existing data feeds and will be available to institutional investors, hedge funds, and quant analysts. Additionally, the company is working on deals with a few undisclosed financial app companies.

Swan debuted the LikeFolio platform along with TD Ameritrade’s Managing Director of Active Trading, Nicole Sherrod, at FinovateSpring 2014. Since then, the company took home a win at the Benzinga Fintech Awards and analyzed stocks based on the social buzz around brands’ 2017 Super Bowl commercials.

The votes are in! HedgeCoVest is the winner of the Overall category at the 2015 Benzinga Fintech Awards.

In attendance at the event were more than 50 CEOs, more than 100 fintech companies, about 20 venture capital firms, 10 major U.S. retail brokerages, and four fintech accelerators, as well as a host of press and media.

HedgeCoVest also performed well in individual categories, winning the Alternative Investment category, and earning runner-up recognition in the Most Disruptive category. Finovate alums taking home individual awards are listed below. See a full list of all winners, runners-up, and finalists.

Thinknum: finalist: Best Use of the Crowd, Most Promising Startup

On April 8th, the Finovate blog might be the second best place to find Finovate alumni.

The best place could actually be in New York at the Benzinga Fintech Awards where a dozen Finovate alums have been named as finalists to compete for Benzinga’s first, second, and third prizes, as well as honors for best in category. More than 115 companies competed to reach the finals in pursuit of the title of “Most Innovative Fintech Company.” 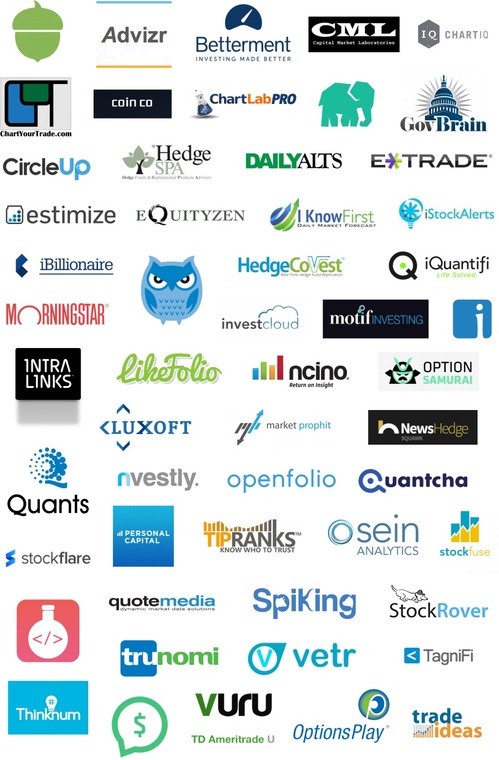 TD Ameritrade & LikeFolio are making their way to the stage next with a social media-oriented approach to investing for Gen Y.

“One of the most common principles of investing is ‘invest in what you know,’ whether it’s a security that you’ve researched extensively or a company or brand that you believe in. LikeFolio leverages the power of social media to help prospective investors understand not just what they know, but what their friends and connections in the social world know as well.
LikeFolio shows users the top five publicly traded companies their networks are talking about and what those companies do. It then translates that information into potential investment ideas by showing users how a portfolio of those five securities would have performed over a 12-month period after an initial investment of $10,000.
The design is clean, the functionality is easy to use and understand, the language is conversational and to the point, and the database is smart and robust with the ability to expose the ties of obscure product brands to publicly traded companies. The technology is patent pending and was designed by Gen Y with Gen Y – or other heavy users of social media – in mind, particularly those who are new to investing.
LikeFolio is not an investment advisor, and they do not transact trades. For users that wish to participate in the market, LifeFolio recommends TD Ameritrade as their brokerage of choice.”