Alogent, which is based in the U.S. state of Georgia, said it will continue to support Jwaala’s collection of solutions, which will be marketed under the new name, Alogent Digital.

Dede Wakefield, Alogent CEO, described the acquisition as “the next major step forward in our mission to digitize and automate the financial services world”, with Jwaala’s platform bringing a “significant foundational set of capabilities”.

“We believe deeply in our unique approach to digital banking,” Jwaala founding partner and CTO Andrew Taylor added. “And we expect tremendous new growth opportunities as part of a company as agile, innovative, and dynamic as Alogent.”

The buyer was Battery Ventures, a US/Israeli venture capital and private equity firm. With that deal, the company regained its former name – Alogent.

In terms of Alogent’s current back office software, this focuses on electronically capturing, processing and analyzing check data and images, including those captured on mobile devices.

Its customers range from small community banks and startups to top tier banks, and it is the latter segment that will be the company’s key focus with the arrival of Battery Ventures.

Founded in 2006, Jwaala demonstrated its MoneyTracker PFM solution at FinovateSpring 2009. In August, the company announced that Alaska USA FCU with more than 625,000 members and more than $7 billion in assets would deploy Jwaala’s Ignite platform. The company began the year with news that United Nations FCU had picked Jwaala’s Ignite as its new digital banking platform.

“We got the contract hammered out in less than 30 days, and three days after the contract was signed, Jwaala had a server built and ready for us to start working with,” said Alpesh Patel, Avadian AVP of information technology. “We were under the gun with our current system’s end of life looming, but Jwaala really came through for us.”

Avadian CU not only had to beat the deadline of its sun-setting home-banking platform, but also recover from an attempt to work with a different vendor in 2014. A lack of progress after several months led Avadian to look for alternatives, which is when Jwaala stepped in. Moreover, Jwaala’s Ignite platform will replace both of Avadian’s online and mobile banking systems, another plus as far as the credit union is concerned. “Running a single solution for both online and mobile will streamline the back-office administration process,” Patel says. “(This) will also create a more consistent member experience.”

With more than 65,000 members, 17 branches, and more than $600 million in assets, Avadian CU is one of the largest credit unions in Alabama. Last fall, Avadian again earned a 5-star Superior rating from bank- and credit union-rating company BauerFinancial, which signified the credit union as among the best in the nation in terms of capital, loan quality, and profitability. Avadia CU was launched in 1934 as Alabama Telco Credit Union.

Founded in 2006 and headquartered in Austin, Texas, Jwaala demonstrated its MoneyTracker BOB at FinovateSpring 2009 and is one of the 20 “charter presenters” at the very first Finovate conference. The company celebrated signing its 100th credit union client, Palisades FCU ($150 million in assets) last year and now includes more than 120 credit unions among its clients.

A few days ago, my wife and I were trying to remember the name of a restaurant where we ate on vacation several years ago.

The answer didn’t really matter, but I shouldn’t have needed to tax my meager memory cells because someone with perfect recall already knows its name, location, and how much was spent. In this case, Bank of America. I used its credit card.

I should be able to hit BofA’s mobile app, type or speak “orlando,” and instantly see the dozen or so charges I’ve made in Central Florida. Even better, I should be able to access the entire paper trail of card charges from that trip and to get a quick refresher of our itinerary four years ago.

Yes, this is the vision of personal financial management and we are slowly getting there. But it’s still a lot of work to manage the data flowing to third-party PFMs. And logging in to yet another program to find a small bit of info can be tedious (see note 1).

Bottom line: We can debate all we want about how many people will use the mythical thing called PFM. But most people want to know something about a past transaction at least once in a while. They shouldn’t have to subscribe to a third-party service find it.

So, listen up, financial institutions. Follow Simple’s lead (and Jwaala which pioneered it five years ago), and make long-term searchable transaction archives a core part of online and mobile banking (notes 2, 3). 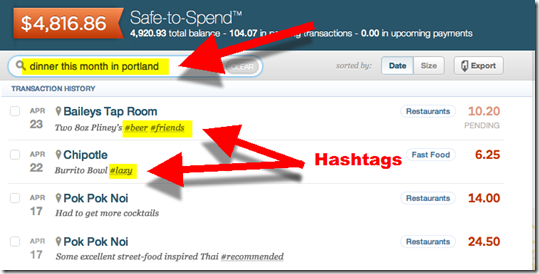 Notes:
1. Though, for me, Mint’s QuickView Mac app, has made transaction look-up much faster by doing away with the login.
2. And you can make “transaction search” a profit center. See Google’s business results for ideas.
3. For info on fee-based financial services, see the Online Banking Report (subscription) on fee-based online services (May 2011); paperless banking and online storage (late 2010); and lifetime statement archives (2005).