A look at the companies demoing live at FinovateFall on September 11 through 14 in New York. Pick up your tickets today and save your spot.

ITSector is an IT company specializing in credit solutions and digital transformation.

Why it’s great
Flowcredit is a management platform to all credit contracting stages. It is the perfect banking solution for the entire credit lifecycle.

Sara Martins, Business Developer
With a background in management, Martins is responsible for exploring market opportunities and for building key customer relationships.
LinkedIn

There are plenty of things about fintech worth celebrating, but today, in honor of International Women’s Day, we’re giving three cheers to the women in fintech!

We’re taking a special look at our most recent show, FinovateEurope, where 23% of the presenting companies were represented by a woman on stage. That’s a 50% increase from 2015, where 15% of the companies had female speakers, and a huge leap from our first event in 2007 with zero (see note 1).

So here’s to progress. And here’s to the women of FinovateEurope:

Editor’s Note: While sadly it’s true that no women were on stage during the 20 demos of the first Finovate. One company, iPay Technologies, was founded by Dana Bowers, but she chose not to speak that day. And Finovate might not even exist if it wasn’t for Melanie Flanagan, then Marketing Manager at Yodlee (also co-founded by a woman), who was the first person to agree to demo. Finally, Susan Hawkins, then SVP at Metavante, was instrumental in getting both her company and Monitise on stage. So there you have it, woman called the shots for at least 20% of Finovate v1.0’s content, even if they ended up delegating the on-stage pitching to men. Thanks Melanie, Dana and Susan! — Jim Bruene, Founder

A look at the companies demoing live at FinovateEurope on the 7 and 8 of February 2017 in London. Pick up your tickets today and save your spot.

ITSector, a software development company specialized in the digital transformation in financial sector, presents a new IM customer service with autonomous “bots” for its credit solutions.

Why it’s great
ITSector will demonstrate a real-time and non-traditional way of accessing banking solutions and customer services through every day instant messaging bots.

One question I’m always asked during a Finovate networking session is, “Why don’t you put more women on stage?” My answer: we don’t dictate the gender of the company’s presenter. We leave that decision up to the company.

This post is to celebrate the fintech industry’s growth of female inclusion. At the first Finovate conference in 2007, there were zero women on stage. Last month, at FinovateEurope 2016, 20% of the companies featured a woman on stage (party on!). Here’s a look at the ladies of FinovateEurope 2016:

While not all of these women are CEOs of their company, each plays a role in removing women from the “endangered species list” of fintech.

While we still have a long way to go, we can all be encouraged by the movement that has already taken place and the global initiatives that have sparked growth. The FemTech Leaders MeetUp, organized by Ghela Boskovich and Michelle Moffatt, has held three successful events this year (I attended the London meetup last month, and the attendance was impressive).

If you’re interested in attending a FemTech leaders event (men are also invited to attend), check out the upcoming meetup in Sydney or RSVP for the meetup in New York after the first day of FinDEVr New York on March 29. It’s less than a 10-minute walk from the venue.

This post wouldn’t be complete without a shoutout to the ladies of Finovate and FinDEVr; the women who help make our events happen (editor’s note: And of course, Julie Schicktanz, the author of this post):

Be sure to check out our celebration of International Women’s Day on the FinDEVr blog.

A look at the companies demoing live to 1,500 fintech professionals. Register today.

Our solution is dedicated to consumer credit, 100% integrated between the client, the bank, and the stores with different channels, using beacons and augmented reality.

Pedro Almeida, Member, Board of Directors

Almeida has experience in project management, business and technical requirements analysis, and application technical architecture definition. He specializes in banking and telcos IT services.
LinkedIn

You met them as IT Sector Group. Now say hello to the company’s very own multichannel banking solution provider, ebankIT.

ebankIT was created in January 2014 by IT Sector Group, just weeks before its FinovateEurope debut. The mission? Building truly multichannel banking solutions that embrace trends both social (a Facebook banking app) and technological (Internet banking for Google Glass). And it will be interesting to see just how far they’ve come when they return to the Finovate stage in February. 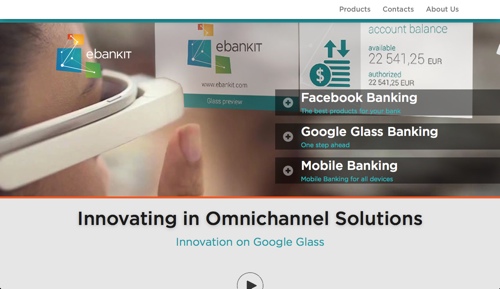 “Our presentation at FinovateEurope 2015 aims to maximize the interaction of financial institutions and clients by extending the concept of omnichannel and social banking,” said ebankIT Marketing and Communications Director, Lis Ferreira. In a conversation a few days ago, Ferreira highlighted the company’s initiatives over the past several months. Specifically, she pointed to the launch of the first Portuguese banking app for Google Glass, released last month by Banco Big. And in October, the release of PIM – Personal Investment Manager, a mobile trading app for stocks and other financial instruments.
At the same time, the company has picked up a number of clients, including financial institutions in Poland, Mozambique, and Angola.
Specific deployments have varied. But each represents a step forward in engaging banking customers on their preferred channels. ebankIT’s solutions include not just novel solutions for wearables and social banking, but self-service banking kiosks, contact centers, account management, branch front desk services, as well. The company also provides tools for financial professionals such as Commercial GPS (demoed at FinvoateEurope 2014), which makes it easier for sales executive to manage deals at the desk or on the go. 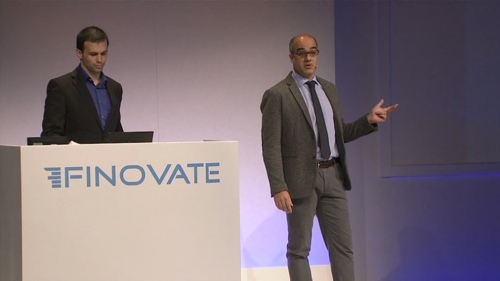 (Above: IT Sector’s Joao Pinto, Director, and Vitor Barros, IT Architect, demonstrating Commercial GPS)
Ferreira admits that many of the bigger banks can be “afraid to open up to new companies.” But eBankIT has been fortunate in that clients have been proactive in contacting them. Additionally, there are some areas, such as the Iberian Peninsula and Eastern Europe, where interest is very high. Ferreira singled out Poland, where its solution for Millennium Bank was ranked as an “Internet banking leader” by Newsweek magazine, for especially high praise: “Polish bankers are some of the most eager of those looking for innovation. They are constantly changing. Whatever is new they want to have it.”
Fortunately, we won’t have to wait long to find out what’s new from ebankIT. The company will be demoing its latest technology at FinovateEurope 2015 February 10 & 11.

“Commercial Sales GPS offers financial institutions’ sales teams a solution to guide all commercial effort, including mobile access from everywhere. The main aim of the solution is to provide global information for commercial activity, including:
The software, based on Microsoft Dynamics CRM, will cover the main activities of the sales process, from account planning, all the way through visit scheduling, preparation, and execution up to monitoring.” 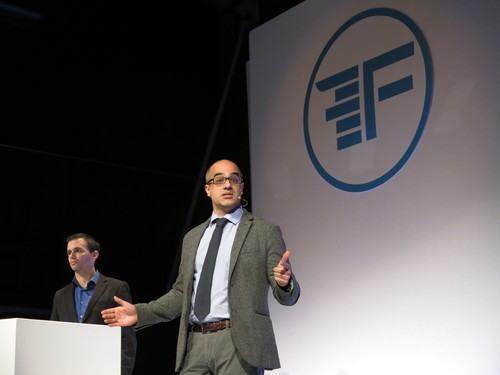 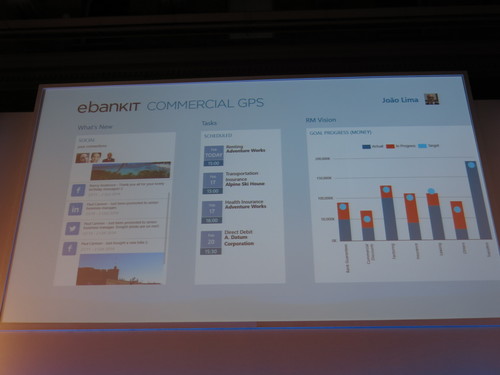