There has been a flood of negativity shed on bitcoin thanks to the recent Mt. Gox drama. Despite that, SecondMarket, which originally launched as a trading platform for pre-IPO companies, plans to launch the first New York-based Bitcoin exchange. 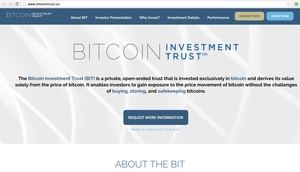 This announcement comes after SecondMarket dipped its toes into bitcoin waters last fall with the launch of the Bitcoin Investment Trust (BIT), a private, open-ended trust that is invested exclusively in bitcoin.

To support the new, yet-to-be-named exchange, SecondMarket will contribute approximately $20 million in cash and bitcoin. SecondMarket CEO Barry Silbert will likely serve as CEO for the new exchange, which will be self-regulated.

According to Fortune contributor Dan Primack, who first covered this story picked up by CNN Money,

“The goal would be to reduce Bitcoin price volatility, by using spot pricing once or twice per day (like gold spot pricing) and serving as a clearing company in which member firms would clear all transactions by day’s end. Members also would keep enough cash in Bitcoin to keep the exchange liquid.”

The new exchange is pending approval by SecondMarket’s board, which meets next week.

SecondMarket demonstrated at FinovateStartup 2009. Check out the demo video here.

The awards honor the top 250 U.S.-based private tech companies, plus recognize 50 to watch. Some of the underlying themes in this group of 300 innovative companies include mobile technology, cloud-based solutions, and social network integration.

Here are the 12 Finovate alum winners of the 250 Awards, listed in alphabetical order:

All companies were selected by industry experts in the following organizations: