Steve Streit, chairman and CEO of Green Dot said, “Kuan has proven to be one of the most impactful leaders in the company’s history. He incited an immediate and lasting shift in our ability to create meaningful technology developments.” Archer will report directly to Streit in his new role.

Before joining Green Dot, Kuan Archer served as vice president of the Cloud Services Platform division at Rovi Corporation. Previous to Rovi, where he spent more than six years, Archer worked at Symantec Corporation. At Symantec, Archer was responsible for designing the company’s first web and mobile-based consumer ID protection and transaction security solution for FIs and e-commerce merchants.
A specialist in consumer financial technology, Green Dot provides reloadable, prepaid debit cards and cash reload processing services throughout the U.S. Beginning 2014 by winning four categories at the 2014 Paybefore Awards, the company announced an extension of its contract with Walmart in December, and in September purchased TPG, adding tax refund processing to its list of services.
Headquartered in Pasadena, California, Green Dot demoed a beta version of its mobile checking account, GoBank, at FinovateSpring 2013.

If your new year’s resolution is to better manage your money, you can pick up a tool to help you accomplish it at Walmart.

Prepaid card company, GreenDot has extended its contract with retail giant, Walmart. Through the agreement, Walmart will distribute the California-based company’s prepaid products through 2015, including GreenDot’s GoBank, which was debuted at FinovateSpring 2013.
Since Walmart accounted for 53% of GreenDot’s revenue in Q3 of 2014, this is good news for GreenDot, though the two have yet to reach a multi-year agreement. 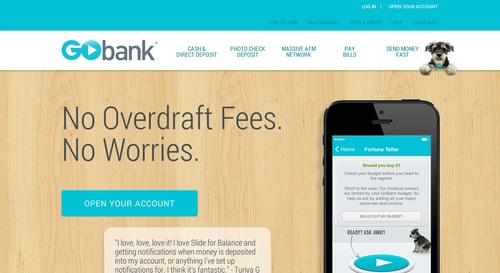