FinDEVr New York will be here in less than one week! Check out company features and take a look at the previews from upcoming presentations. And of course, don’t forget to register today to save! 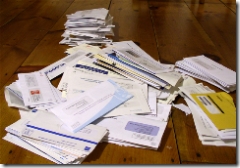 Advertising-monitoring firm, Mintel Comperemedia reported last week that nearly 9 out of 10 credit card solicitations in 2006 directed recipients to the Web, up sharply from 56% in 2003 (see note 1, 2). Several big mailers, namely American Express, still seem reluctant to use website response as an option, at least in the mailers we see at our house.

American Express tests must show a drop in response by offering too many choices. But if you don't have the budget of American Express, which can afford to drop a mail piece in every credit-worthy household every two or three weeks, you should add website options to your direct mail creative. That way, you can at least capture a lead at your website, even if they don't ultimately accept your credit offer.

Total mailing volume for 2006 was 9.2 billion pieces (see note 1), or about 3 per week per credit-worthy household. Two of those were from the five largest mailers listed below which accounted for more than 60% of the volume, according to Comperemedia. JPMorgan Chase accounted for 18% on its own.

Here's a breakdown of the billion-piece club, and their percent change compared to 2005:

1. Comperemedia tracks mailing volume for more than 150 large financial institutions. So the figures here do not include mailings from thousands of smaller banks and credit unions. In total, those probably account for less than 5% of the total from the top-150. 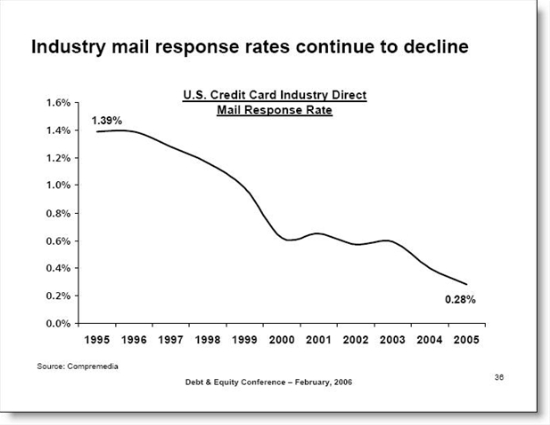 Capital One Financial Corp. will be one of the nation’s 10 biggest banks based on deposits and managed loans when it buys Long Island’s $57.6 billion North Fork Bancorporation for $14.6 billion in cash and stock.

That Capital One has turned itself into a national depository institution with branches and checking accounts is yet another indication, if one is needed, that credit cards are no longer a stand-alone business.

The deal gives Capital One a toehold in the lucrative New York market, and apparent expansion prospects there. It also builds on last year’s $5.3 billion acquisition of Hibernia Bank, which closed in mid-November. According to Capital One’s 10-K, Hibernia experienced what it called substantial growth in deposits after Hurricane Katrina.

Unremarked by media coverage was the irony that a business that’s still very profitable apparently feels it needs a cheap source of funds, and customers to sell to, in order to weather the many challenges now threatening its core competency.

Unremarked by the media, perhaps, but not by the stock market, which didn’t respond well to the news: Capital One stock, which closed on Friday, March 10, at about $90, closed on Monday March 13, the day of the announcement, at $83.10, and at $82 the next day. Morgan Stanley’s Kenneth Posner estimated in an investment advisory that the deal was neutral to Capital One earnings, and allowed Capital One modest synergies from the deal, worth $400 million in strategic value at best. He recommended buying on Monday if shares fell.

Standard & Poor’s said in a note that it felt the deal was priced fairly at about 15 times their 2006 earnings estimate for North Fork of $2.08 per share, and a price/book ratio of 1.6 times earnings. “We thought the recent weakness (in North Fork stock, prompted by concerns about its deep exposure to residential mortgages) presented investors with an attractive entry point. Apparently, Capital One arrived at the same conclusion,” wrote the note’s authors, Jason Seo and Mark Hebeka.

The company was clearly acting defensively, and recognizing that future growth in the credit card sector will be nothing like what it was only a few years ago—even for a company as well managed as Capital One—and that it won’t be again, anytime soon.

“(The deal) says a lot about their future as an entity,” says Michael Auriemma, president of Auriemma Consulting. “I’m not sure I’d have predicted they’d be buying banks, but there’s a strong realization that credit cards belong in an institution with retail customers—the amount of information- and data-sharing synergies by having both is phenomenal, and credit cards are challenged in terms of growth of new acquisitions these days.”

Capital One apparently has no bone to pick on that score. In its recent 10-K, it said that “The competitive environment is currently intense for credit card products. Industry mail volume has increased substantially in recent years, resulting in declines in response rates to the Company’s new customer solicitations over time. Additionally, the increase in other consumer loan products, such as home equity loans, puts pressure on growth throughout the credit card industry. These competitive pressures remain significant as a result of, among other things, increasing consolidation within the industry.”

Auriemma thinks, though, that Capital One can continue to be highly successful in the future. “There’s a lot of room to make a lot of money, and to grow your credit card business without growing new accounts,” he says. This, he says, includes building bigger balances, increasing consumer spending, and using the data from the payments stream to cross-sell other products to credit card customers. “This (deal) is less about new customer acquisition and more about managing existing customers, looking for a funding source, and diversifying revenues.”

By remaining on the offensive, Capital One apparently also hopes to keep Wall Street happy, and itself independent. Aside from Advanta Bank Corp., which reported 2005 net income from continuing operations of $116.7 million, America’s other monoline banks, once wildly profitable businesses, are gone with the wind. And Capital One itself isn’t entirely safe from acquisition; its float is only $25 billion, so it could clearly be bought by a large bank. Last year, Bank of America bought MBNA for about $35 billion in cash and stock, and other large banks—Wachovia Corp., for one—have said they’re interested in getting back into the credit card business.

North Fork reported 2005 net income of $948 million on revenues of $3.48 billion, and more than doubled its asset base after two 2004 acquisitions—Greenpoint Financial and The Trust Company of New Jersey. It has 360 branches in the New York area, including in northern New Jersey, and, according to Standard & Poor’s, it has about 4.8 percent of the area’s deposits. When the deal, subject to regulatory and shareholder approvals, closes in the fourth quarter, its top executives stand to get a payout of about $288 million, including chief executive John Kanas, who could receive as much as $185 million. Kanas joined the bank in 1971 and became president and chief executive in 1977. (Contact: Auriemma Consulting Inc., Michael Auriemma, 516-333-4800; Capital One Bank, 804-284-5800; North Fork Bank, 631-531-2058)

We like the idea of posting selected third-party endorsements on your website, for example, FDIC, Better Business Bureau, VeriSign and so forth. However, make sure you don't let your membership expire, otherwise you get a very bad result.

In reviewing the eSmartLoan website, purchased last month by Capital One (see Jan 20 post), we clicked on the Better Business Bureau logo on its home page and were greeted by a pop-up explaining that the company was no longer a member, either because they failed to pay their dues or failed to comply with BBB policies.