The big card companies continue to make the kind of deals that underscore the importance of fintech to the future of financial services. This week we get confirmation that international payments giant American Express has agreed to acquire SME lender Kabbage.

Terms of the deal were not disclosed. Speculation on the deal in recent days has put the purchase price between $850 million and $1 billion.

“This acquisition accelerates our plans to offer U.S. small businesses an easy and efficient way to manage their payments and cash flow digitally in one place, which is more critical than ever in today’s environment,” President of Global Commercial Services at American Express Anna Marrs said.

A Finovate alum for more than a decade, Kabbage has raised $2.5 billion in funding, with the company’s last equity round closing in 2017 after raising $250 million. This year, in addition to the launch of its business checking account, Kabbage distinguished itself as a major conduit for small businesses seeking COVID-19 related relief funding. The company said it has facilitated 300,000 Paycheck Protection Program (PPP) loans valued at more than $7 billion. Kabbage’s participation in the program was a dramatic return to its role as a resource for small business financing after the company suspended SME lending in April in response to the global health crisis.

“At Kabbage, we have always made the success of America’s small businesses our primary objective,” Kabbage CEO and co-founder Rob Frohwein said in a statement. “We have built a technology and a data platform that provides them with the kind of capabilities and insights often reserved for larger businesses. By joining American Express, we can help more small businesses succeed with a fully digital suite of financial products to help them run and grow their companies.”

As part of the agreement, both Kabbage’s securitized SME loans and its PPP laons will be serviced by an separate entity to be established by Kabbage and American Express, the Financial Times reported.

American Express’ purchase of Kabbage comes less than a month after another big acquisition in the online SME lending space: Enova International’s $90 million deal for OnDeck. For both companies, the acquisitions provide the opportunity to expand meaningfully beyond their core competencies: Enova adding to its consumer lending operations, and AMEX bringing working capital and SME financing to its commercial card business.

The acquisition is expected to close later in 2020.

Photo by Paul IJsendoorn from Pexels

Have you ever heard of open-banking-infrastructure-as-a-service? American Express has, and it has tapped U.K.-based Yapily as the provider.

The open banking infrastructure company has signed an agreement with American Express to take the financial service giant’s open banking payment initiation product, Pay with Bank Transfer, to select European markets. Yapily’s API will enable Amex’s end users to complete a payment without being redirected to a different channel or website.

“The partnership is the first real step to bringing open banking payments to everyone across Europe and the U.K.,” said Yapily CEO and founder Stefano Vaccino. “Now, a significant number of international merchants will finally be able to access, and benefit from, an open banking API.”

Yapily was founded in 2017 to help financial service providers leverage the open banking opportunity by connecting them with banks. The company enables its clients to access data in 15 countries across Europe, and at more than 180 financial institutions. Yapily has raised $18.4 million.

Photo by Jan Tinneberg on Unsplash

A strategic partnership between Bill.com and American Express will enable businesses to automate the AP process to make it easier to pay vendors using their American Express Business or Corporate Cards.

The two companies have announced a new solution, Vendor Pay, that streamlines vendor payments, improves working capital and cash conversion cycles, and gives SMEs better data for payment reconciliation. And by relying on single-use virtual account numbers within their current Business or Corporate cards, Vendor Pay also relieves businesses of the burden of having to establish additional card accounts.

“The Bill.com and American Express partnership is a powerful combination of two innovators and leaders in business payments,” Bill.com CEO and founder Rene Lacerte said. “American Express Business and Corporate Card members will now have a central platform for managing digital business payments via Bill.com, with the added benefits of earning the rewards of their card and automating their manual and time-consuming back office processes.”

The partnership will also enable Amex Business and Corporate Card members to make payments via Bill.com’s easy-to-access ACH and check services, which include real-time status updates. Vendor Pay offers both a basic plan with core functionality and no monthly fee for the first user, as well as advanced plans with monthly fees that include features such as bill approval workflows and synchronization with major accounting software platforms.

Bill.com closed out 2018 with news that it had achieved NACHA certification as an ACH third-party sender. The company also partnered with First National Bank of Omaha (FNBO) to provide enhanced digital business payment solutions for its SME customers. Last fall, Bill.com announced the general availability of the automated international business payments solution that it had begun piloting over the summer.

Founded in 2006 and based in Palo Alto, California, Bill.com has raised more than $259 million in funding. The company demonstrated the CashView feature of its AP/AR management platform at FinovateSpring 2012.

A veteran of our developers conference, American Express participated in FinDEVr Silicon Valley in 2015. At the event, Andres Ricaurte, VP of API and Partnerships, and Sathish Muthukrishnan, VP of Engineering, presented The role of B2B payments in the evolving commerce ecosystem, a look at American Express’ role in commercial payments, as well as rise of the API.

American Express reported net income of $2.7 billion in 2017 and revenues of $33.4 billion. The New York City-based global financial services company trades on the New York Stock Exchange under the ticker “AXP,” and has a market capitalization of $89 billion.

While many of you were busy catching Pikachu last week, you may have missed that Nasdaq, in collaboration with KBW, launched an index to track financial technology. Officially named KBW Nasdaq Financial Technology Index (KFTX), the fund tracks 49 fintech companies, including 17 Finovate and FinDEVr alums.

Finovate and FinDEVr alums listed in the index include:

It’s worth noting that the index, which will be rebalanced quarterly, does not consider activity from private companies, startups, or banks. Large, public companies may not be as sprightly as two guys in a garage, but they create their fair share of cutting-edge products and services. When creating the index, KBW and Nasdaq adhered to three guidelines:

The loans, which will help Amex expand its customer base, will range from $5,000 to $2 million for up to a 2-year term. To qualify, a business must have been in operation for at least two years and have a minimum of $50,000 in revenue.

The partnership is expected to help Amex make up for the termination of its alliance with Costco, which accounted for 20% of Amex’s outstanding loans.

Lendio works on behalf of small business borrowers to match them with the right loan, helping the 75 lenders on its platform reach qualified borrowers. Last year, the Utah-based company facilitated over $128 million in financing to more than 5,100 businesses. Lendio debuted at FinovateSpring 2011.

American Express Global Corporate Payments showed its corporate card programs and supplier payments solutions to help you as you grow your business.

The role of B2B payments in the evolving commerce ecosystem
The rapid growth of digital and cloud technologies, the evolution of fintech and the globalization of business, present exciting opportunities for the B2B commerce space. Learn how American Express is helping shape the future of commercial payments and the role that APIs and partners are playing in this journey.

Are you building new financial technology? Be sure to register soon for the only event exclusive for fintech developers, FinDEVr 2015, 6/7 October (just a few days away!) in San Francisco.

The latest from upcoming FinDEVr 2015 presenters

Stay up to date on daily developments by following FinDEVr on Twitter.

American Express will focus on the role of B2B payments in the evolving commerce ecosystem.

Why it’s a must-see

The rapid growth of digital and cloud technologies, the evolution of fintech, and the globalization of business present exciting opportunities for the B2B commerce space. Learn how American Express is helping shape the future of commercial payments and the role that APIs and partners are playing in this journey.

As you’d expect from American Express, the app is attractive and well designed. It includes 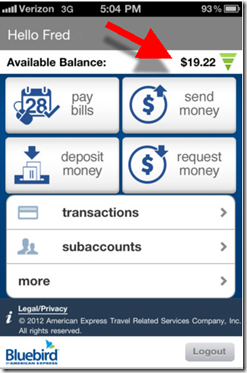 My experience: I downloaded the 7MB app today. The only screen visible to non-cardholders is dominated by a login area. But it also has a Get Started button, which I learned was where you apply for a new card (see number 1 below). It would probably be better to call it “Get your card” or something more obvious.

This next screen contained an odd question, “do you have a Starter Card?” (with that capitalization)(see screenshot 2). Again, this is not the clearest way to make a sale. Why not just say “Do you want a new card?”

After I clicked “No,” the app took me through a standard three-step process for getting a card including name/address, SS number and disclosures (see screenshots 3-5). For some reason, my company email address did not work (an error message said I could not register with that email). But a standard @gmail address worked fine. The application also has the annoying requirement for a capital letter in the password which is overkill, especially on a mobile phone.

In all, it took almost five minutes to complete because of the various errors I made along the way.

But despite being an Amex cardholder for two decades, the company could not “verify my information” (see screenshot 6) and I was declined for a prepaid card. I went back and re-entered everything with the same result. The final error message (which could use a rewrite) suggested that the issue might be my fault. But if I thought otherwise, feel free to give them a call.

Which I did. But after 3 or 4 minutes trying to explain to the rep what had happened, I gave up. She was picking up my keywords and reading the script. But she was clearly having trouble following my story. At the 3.5-minute mark mark she suggested I “download the mobile app.” That’s when I signed off.

Bottom line: It looks like a great app and I look forward to using it. And I’m willing to cut American Express some slack given how new it is. The app hasn’t even been officially announced, so I’m sure the kinks will be worked out shortly. 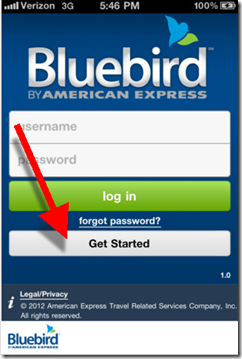 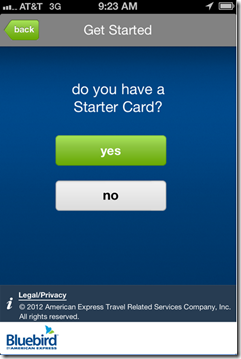 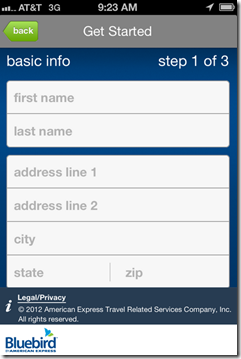 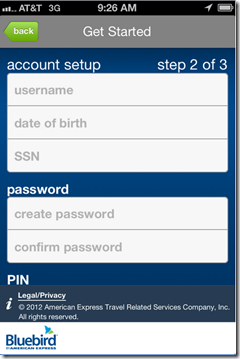 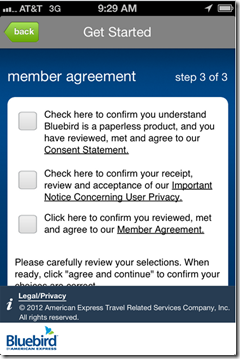 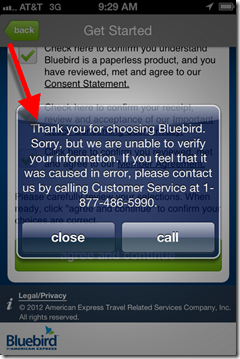