With bitcoin and cryptocurrencies enjoying renewed interest, it’s worth noting that many fintech fans encountered their first bitcoin-related businesses through Finovate conferences.

Here’s a look at some of the companies that have brought their bitcoin and crypto-powered innovations to the Finovate stage.

OpenCoin – FinovateSpring 2013 – The company now well-known as Ripple was introduced to Finovate audiences back in 2013. At FinovateSpring that year, Chris Larsen – CEO of a startup called OpenCoin – introduced its virtual currency and distributed open source payment network. Founded in 2012 and headquartered in San Francisco, California, Ripple currently has more than 300 financial institutions who leverage its RippleNet blockchain network to power real-time payments.

KlickEx – FinovateAsia 2013 – New Zealand-based KlickEx unveiled its asset-backed and algorithmic cryptocurrency for institutional and retail users at FinovateAsia in 2013. The company, founded in 2009, recently announced a partnership with the National Reserve Bank of Tonga to launch a new national payment system.

Coinbase – FinovateSpring 2014 – Among the bigger names in bitcoin and cryptocurrency to have demonstrated their technology at Finovate conferences is San Francisco, California-based Coinbase. Debuting at Finovate with its Instant Exchange in 2014, Coinbase has grown into one of the biggest players in the cryptocurrency market with more than 35 million verified users and more than $320 billion in total volume traded on its platform.

CoinJar – FinovateEurope 2015 – Australia’s largest and longest-operating bitcoin company, CoinJar demonstrated its platform at FinovateEurope 2015. The Best of Show-winning firm was the first in its market to offer a bitcoin debit card that enabled cardholders to use the cryptocurrency for everyday purchases.

Bitbond – FinovateEurope 2015 – Berlin, Germany’s Bitbond offers a global P2P bitcoin lending platform that enables anyone with an Internet connection to both get loans as well as invest their savings for interest. The company demonstrated its AutoInvest functionality, which facilitates and automates fund allocation in a portfolio, at FinovateEurope 2015.

itBit – FinovateSpring 2015 – New York-based itBit demonstrated its bitcoin trading platform at FinovateSpring in 2015. The company’s technology enables both institutional and retail investors to buy and sell bitcoin. Rebranded as Paxos in the fall of 2016, the company has since highlighted its work in private blockchains and distributed ledger technology.

Blockstack.io – FinovateFall 2015 – Best of Show winning Blockstack.io offers a hosted and licensed enterprise blockchain platform that enables financial services companies and others to build applications on their own private blockchain. The San Francisco, California-based company, founded in 2015, was acquired by Digital Asset Holdings for an undisclosed sum before the end of the year.

ArcBit – FinovateFall 2015 – With a pledge to leverage bitcoin and blockchain technology to bring banking to the underbanked, ArcBit, which made its Finovate debut at FinovateFall in 2015, offers a mobile wallet specifically designed to give bitcoin owners full control over their cryptoholdings.

Coinalytics – FinDEVr San Francisco 2015 – Our developers conference, FinDEVr is one way that many bitcoin and crytocurrency innovators were able to bring their innovations to the public. Coinanalytics, which offers an end-to-end intelligence platform for the bitcoin industry, is an example of the kind of company developing solutions to make bitcoin a better opportunity for payments, financial services, and IoT.

BlockCypher – FinDEVr Silicon Valley 2015 – Another alum of our developer’s conference, BlockCypher offers companies a cloud-optimized, enterprise-grade blockchain platform that enables them to build reliable blockchain apps. Headquartered in Redwood City, California, the company was founded in 2014.

Gem – FinDEVr Silicon Valley 2015 – Founded in 2014 and based in Venice, California, Gem demonstrated its API which provides a comprehensive security solution for bitcoin apps – without taking control over funds. With a few lines of code, Gem enables developers to provide an interface to their bitcoin apps that gives users better funding options.

Ledger – FinovateEurope 2016 – Headquartered in Paris, France and founded in 2015, Ledger designs trusted hardware solutions for bitcoin and blockchain apps. The company’s solutions, including the Nano X and Nano S, provide cryptocurrency owners with a secure, portable way to take and manage their digital assets wherever they are.

Stratumn – FinDEVr New York 2016 – Enterprise blockchain technology company Stratumn provides firms with the infrastructure and tools they need to to build, deploy, and run blockchain. The company presented the high performance, proof-of-existence engine of its development platform at our developer’s conference in 2016. Jerome Lefebvre took over as CEO of the company from co-founder Richard Caetano in the fall of 2019.

Plutus.it – FinovateEurope 2018 – London-based Plutus demonstrated its Tap & Pay and Debit Card solutions that enable consumers to pay with bitcoin or Ethereum at any contactless point of sale. Founded in 2016, the company currently supports more than 26,000 Plutus accounts and credits its users for acquiring more than $100,000 in rewards via its Pluton Rewards program.

Photo by Thought Catalog from Pexels 2015 was quite a year for the 800+ Finovate alumni. From acquisitions to IPOs, and everything in between, there was plenty to tweet about. Here are the highlights from the 2015 Best of Show winners:

CoinJar showed a technology that enables consumers to buy, sell, and use digital and traditional forms of currency any way they choose, from dollars to bitcoins.

ebankIT demoed its omnichannel and social banking solution that maximizes interaction between FIs and clients.

eToro showed its innovations in social trading and investing for generation Y.

Shoeboxed.com showcased its Receipt Capture for Banks, a solution that boosts functionality of online and mobile banking apps while providing fraud protection.

Blockstack.io launched technology that enables financial services and other enterprises to set up and build applications on a private, hosted blockchain.

Finanteq launched its SuperWallet that helps banks take full advantage of their potential by integrating m-commerce and remote services with mobile banking.

SaleMove demoed its Engagement Platform and Omnicall technologies that enable online consumers to engage live with businesses as if they were face-to-face.

Soundpays showed its app that recognizes ultrasonic and sonic waveforms even in extremely noisy environments.

Want to see more award-winning demos of the newest fintech ideas? Pick up your ticket FinovateEurope 2016 and we’ll see you in London.

If you’re in need of a little distraction, we have good news. The demo videos from FinovateEurope 2015 have been released. All 72 videos from last month’s conference, along with the full history of Finovate demos, are publicly available on the Finovate video archives page.

To get started, here are the seven Best of Show winners, in alphabetical order:

If there is anything more exciting than the first Finovate conference of the year, it’s seeing who will be the year’s first Best of Show award-winning companies.

After two days of fintech presentations and demonstrations, our audience of more than 1,100 has shared its opinion on which technologies at FinovateEurope 2015 stood out from the rest of a truly impressive pack.

Here are this year’s winners, in alphabetical order:

Avoka for its three-minute loan application that promises to deliver the fastest onboarding experience in the world.

CoinJar for its technology that enables consumers to buy, sell, and use digital and traditional forms of currency any way they choose—from dollars to bitcoins.

ebankIT for its omnichannel and social banking solution that maximizes interaction between FIs and their clients.

eToro for its innovations in social trading and investing for Generation Y.

mBank and i3D for their interactive, digital retail-branch concept.

Meniga for Market Match, its transaction-data analytics and enrichment engine.
As always, thanks to everyone who attended and participated in FinovateEurope 2015. We’ll see you next year!

CoinJar is the eminent digital finance platform in the Australian market. The company’s co-founders are making their way to the stage.

CoinJar also has an open API, allowing developers to innovate on top of the CoinJar platform to adopt the best of blockchain technology for uses other than currency. 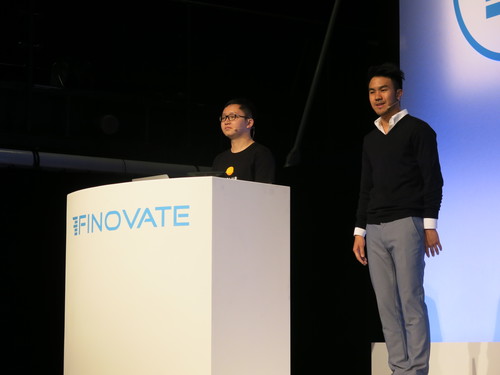 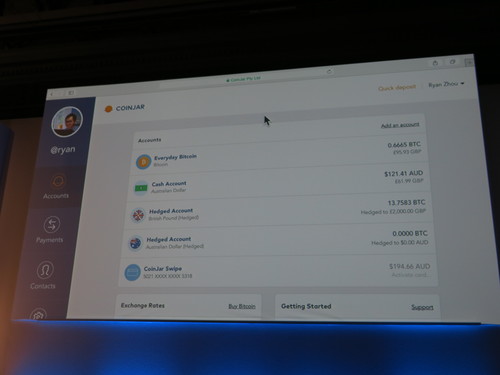 We’ll be in London three weeks from today, where drinks will be served, networking will be in full force, and we’ll be wrapping up the first day of FinovateEurope 2015 (get your ticket here).

To help you prepare for the onslaught of 70+ live demos full of new technology, some of the presenters provided us a summary of what to expect from them on stage. This week, we’re featuring CoinJar, EVRY, FOBISS, Strands, Trunomi, and VATBox:

CoinJar is a digital finance platform that gives customers a way to manage and spend both traditional and digital currencies when and how they want.

EVRY is the Nordics’ leading financial service provider and is presenting Spendific, a concept designed to make personal finance simple.

Why it’s great
In Spendific there are no complicated graphs or charts to tell you whether you’re on track with your finances. Just one number. No worries.

Anne Moa, Product developer
Moa has previously worked as a youth economist in a large Norwegian bank, with responsibility for the bank’s main channel of communication towards young people.
LinkedIn

FOBISS is a first modern tool enabling retail banks to manage their entire cash supply chains with one button click.

Why it’s great
The industry’s first and only cash management system empowered by Artificial Intelligence and driving best decisions on time.

Andrius Ojeras, Global Sales Director
Ojeras is an IT Sales professional with more than 10 years of experience within multinational IT organizations.
LinkedIn

Why it’s great
With Strands Loop, financial institutions can create a more seamless and personal banking experience and build better relationships with their SME clients

Dario Lombardi, General Manager, Strands Finance
Lombardi leads the Finance BU. He joined Strands in 2011 as Business Development Director and has been responsible for managing sales in EMEA. Prior to Strands, he worked for Bloomberg LP
LinkedIn

Why it’s great
A customer-focused mobile solution that eliminates their most significant pain-points; making their account opening and data management experience simple, secure and easy.

Stuart Lacey, Founder & CEO
Lacey is an innovator, team-builder and thought leader. Sometimes mistaken for the Energizer Bunny – he is relentless in his drive to find better ways to learn, build, nurture and share great ideas.
LinkedIn

Why its great
VATBox’s Automated VAT recovery solution enables customers to have one global process that tracks and manages VAT spend with ease, and to maximize VAT refunds.

Stephen Coleclough, Advisory Board Member
Coleclough is a Tax Consultant in Mishcon de Reya’s Tax Group with over 30 years’ experience in tax and law. He was formerly a Partner and Global Leader of Indirect Taxes at pwc.
LinkedIn

FinovateEurope will be held February 10 & 11 in London. Pick up your ticket today to save your seat at the hottest fintech event of the year.

Questions? Check out our FAQ for some answers.