“Kasasa 360 provides account holders around-the-clock access to personal finance management (PFM) tools through an online and mobile-based platform. Designed to deliver a user experience that leapfrogs even the best megabank systems, the latest Kasasa innovation allows consumers to securely aggregate and manage all of their financial products, including those they hold at other financial institutions.”

Almost 150 community financial institutions have already signed up for Kasasa 360. Gabriel Krajicek, CEO of BancVue, is projecting that number to double by the end of 2012 and reach 1,000 members in 3-5 years. Krajicek also claims that if the growth pattern continues, the Kasasa network will be larger than BofA, Chase, or Wells Fargo and will have a marketing budget equal to such megabanks.

To learn more about Kasasa, watch its Finovate 2009 demo.

We recently looked back at Finovate’s Best of Show Awards archives and wanted to share the list of the 41 award-winning companies.

Here’s the Best of Show history that stretches back to 2007, the inception of Finovate: 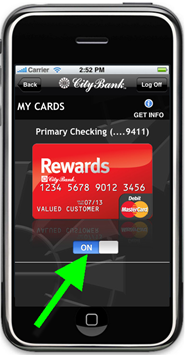 City Bank of Texas has been a mobile innovator for more than four years, launching a ClairMail-powered mobile site in Oct 2008. I first heard its story at the Mobile Summit in June 2009. At that time, the bank already had 10% of its online banking base using mobile.

City Bank now offers a full range of apps including Android, iPhone and iPad, which make for a pretty impressive graphic. The new apps are powered by Malauzai Software.

And, in a world where most apps look pretty much the same, it has managed to pioneer several unique features:

Both features are must-haves. But the on/off switch is brilliant both for its simplicity and value. And this tangible mobile feature/benefit likely to get talked about in the press and at the weekend barbeque. We are giving it an OBR Best of the Web award, the first of the year and 84th of all time (see note). 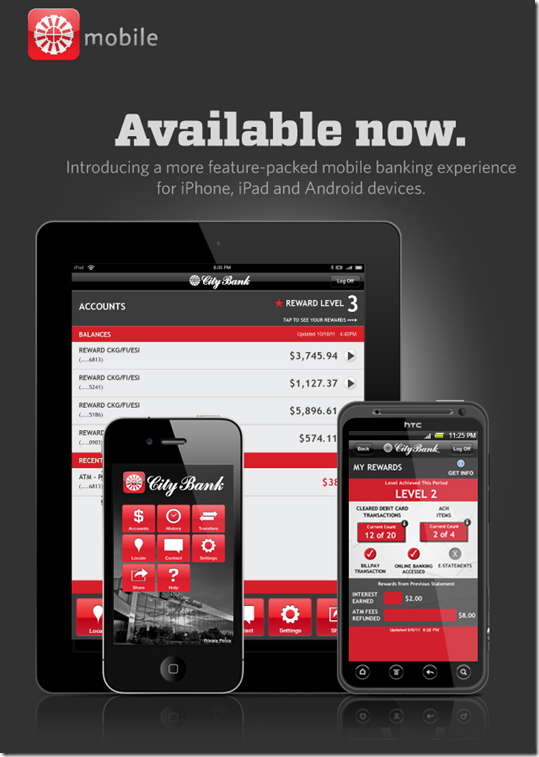 Note:
1. Since 1997, our Online Banking Report has periodically given OBR Best of the Web awards to companies that pioneer new online or mobile banking features. It is not an endorsement of the company or product, just recognition for what we believe is an important industry development. If anyone knows of other financial institutions offering a similar feature, let us know and we’ll update the post. City Bank of Texas is the 84th company to win the award since 1997 and the first in 2012. Recent winners are profiled in the Netbanker archives.

I just spent the better part of two days attending BancVue’s monthly client/prospect meeting called BTAN (note 1). I knew they would have high-energy presentations, great ideas, and outrageous antics; after all, I’ve seen them take home three Finovate Best of Show trophies. They know how to drive a point home.

But what I didn’t expect was to come home believing its Kasasa strategy might really work. Kasasa launched at FinovateFall 2009 (video here) and is the first major attempt to create a nationwide brand around the checking account. They are trying to do for checking what Visa/MasterCard did for the credit card or what Intel did for PC manufacturers with “Intel inside.” 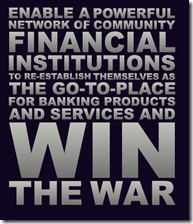 One very different element here is that BancVue is creating a national brand exclusively for use by community banks and credit unions. Large banks are viewed as the enemy (see inset from BancVue’s “about us” page) and are not allowed to “stock” the Kasasa brand.

On the surface it seems impossible. How could hundreds, if not thousands, of proud, local financial institutions — many who’ve been building a local brand for many decades — unite under a nutty brand called “Kasasa” of all things?

But is it crazy like the iPod was crazy? Smaller banks and credit unions are being taken to the cleaners by the big banks, losing more than half their market share in the past two decades. They have the local ties, the human connection, but it is usually hard to maintain the product set, marketing power, and online/mobile UI, of Bank of America or Chase.

But what if someone was able to level the playing field with best-of-class products and combine the marketing power of 1,000 financial institutions into a national brand? (note 3) Then the community banks/CUs could go ahead and compete on service, price, value and local connections.

It sounds too good to be true, really. And I was skeptical when I heard the pitch two years ago. But after seeing how BancVue has signed up more than 600 FIs for rewards checking, hit #23 in the Inc 500, and witnessing their passion in person, I think they have a real shot.

Bottom line: It takes a long time to build a national financial brand, especially one centered on lowly checking accounts. Other than PayPal, what’s the last one you can think of? Capital One, founded 1988, maybe. Discover Card, launched in 1985, perhaps (note 4). And I can think of a hundred reasons why it won’t work.

But Kasasa is definitely out of the gates and gaining traction. Having just finished my review of the most important trends of 2011, I have a feeling Kasasa could make this list in 2012 or 2013. 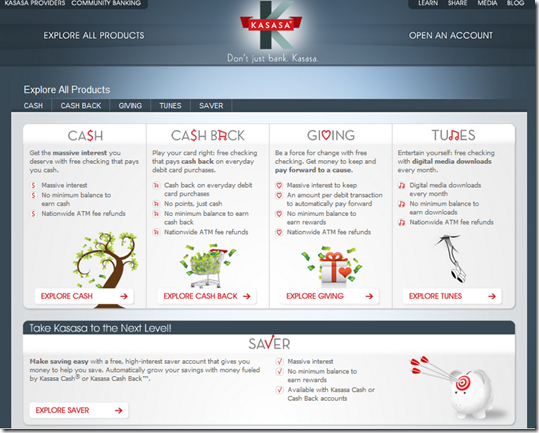 Kasasa products dominate the homepage of Farmers Citizens Bank (link)
Question: Do Kasasa ads clutter the Farmer’s homepage? No more than any other promotion. And they are at least attention getting. 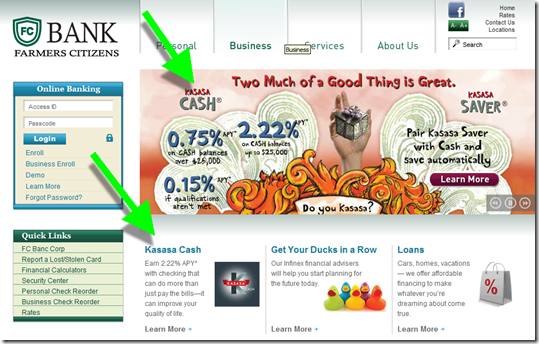 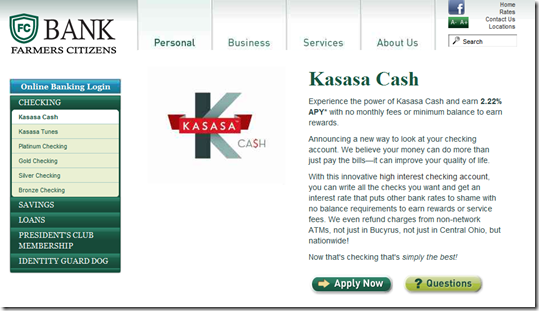 Notes:
1. I attended the event at the invitation of BancVue. But I am not consulting for them or their customers. BancVue is a customer of The Finovate Group for our event and our published reports just like hundreds of other companies. However, they did feed me really well, which, as my family will attest, is a powerful motivator in my life. So I can’t say I’m totally unbiased.
2. After hearing the detailed reasoning behind the branding decision, I actually think the Kasasa choice makes sense. But you’ll need to see the presentation to get it. The Financial Brand breaks it down here.
3. BancVue says that with 1,000 financial institutions offering Kasasa it would be bigger than the largest U.S. bank in branch network and marketing budget.
4. I can’t think of any major national banking brands that have appeared in the Internet age other than PayPal, and perhaps NetBank (RIP). ING Direct made it, but they were a spinoff of a powerful international brand, and even then they spent more than a BILLION in the United States alone during the past 12 years making ING Direct a household name. E*Trade, Ally also come to mind, but the former is more associated with brokerage and the latter is a name change from GMAC. Bank of Internet is doing well, but is hardly a household name.

Last week we looked at the holiday efforts (or lack thereof) of the 20 largest U.S. banks. But aside from PNC Bank’s “Christmas cost index” and ING Direct’s “12 days of mobile,” not much this holiday season was particularly noteworthy (inset for Midland Bank gift cheques, circa 1956, see credit below).

For inspiration, you need to look at the smaller banks and credit unions. Here are five we found through random googling today: 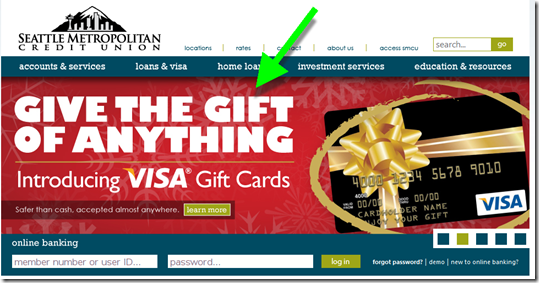 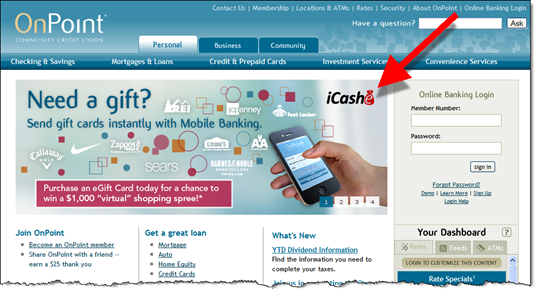 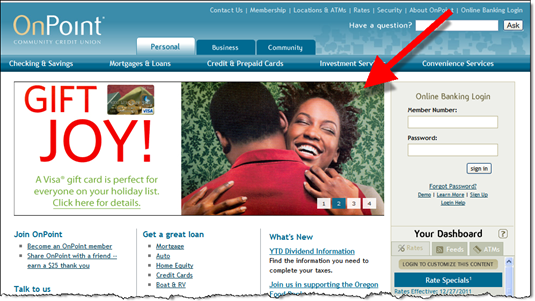 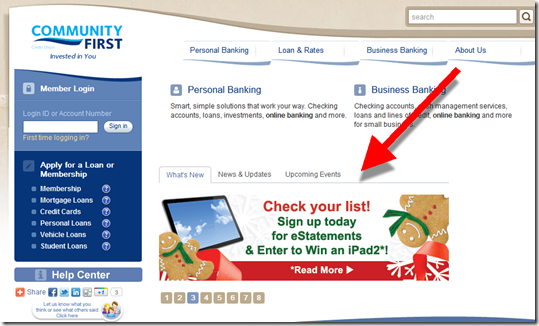 5. Texas Bank: “Stash the Christmas cash” (homepage, one of four rotating promos; landing page)
Note: “Stash the cash” is similar to BofA’s “keep the change;” debit card purchases are rounded up to nearest dollar with the extra 1-99 cents deposited into savings. The holiday promo included a 5% bonus match on each transfer in December (website powered by Bancvue) 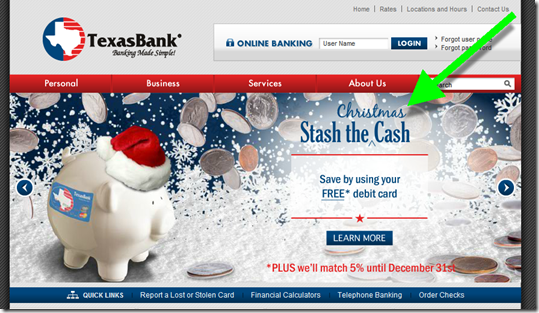 Compliance management company, Continuity Control, recently announced that it doubled revenue in the third quarter of 2011:

“As it did in the first two quarters of 2011, the company doubled its revenue again in the third quarter with growth in markets across the country.”

Along with this pattern of growth, it also announced a partnership with BancVue, a company that provides marketing and consulting solutions to community financial institutions.