When the last paper check is dropped in the mail, it will be a business check. All signs point to that day being over the horizon.

Not that no efforts are afoot to squeeze business checks out of the payments system. At least a dozen companies around the world are trying to automate business payments with so-called order-to-pay software systems, including, in the U.S., Bottomline Technologies, Harbor Payments, and Xign Corp.. Various business payment card systems continue to emanate from the nation’s banks. And advocates of routing business payments through the automated clearinghouse have been working diligently at the task for years.

But checks remain stubbornly alive: According to the Federal Reserve's landmark 2004 Payments Study, total check volumes between 2000 and 2003 only declined from 41.9 billion items to 36.7 billion items. And according to the US Census Bureau's 2005 Statistical Abstract of the United States, consumer payments made by check between 2000 and 2003 only declined from 28.8 billion items to 26.8 items. The 10 billion item difference, says a Fed spokesman, can be considered business checks. This suggests some little progress in squeezing paper out of the system, but no reason to write checks’ obituary.

The most progress in eliminating paper checks is seemingly being made in online bill payment. According to the American Banker’s Association, less than half of all consumer bills—49 percent—were paid by check in 2005, compared with 72 percent in 2001. Since bills represent a large fraction of consumer checks written, this suggests an accellerating trend away from consumer checks,.

But if civilians seem to be edging away from checks, business is apparently sticking to the tried-and-true. This is actually counterintuitive, since businesses would seem to have a lot to gain by giving up paper checks, if only for efficiency’s sake, while civilians, who get free checking, have no such incentives.

As usual, things look different once you’re in the weeds. In this case, a superficial analysis ignores simple balance-of-power and treasury-management issues, not to mention the tyranny of sheer habit.

Aside from sheer convenience, consumers have little to gain from paying their bills online, but as indicated by the numbers, that matter alone–combined with minor carrots and sticks from billers and banks–seems to have turned the tide.

Businesses, on the other hand, not only have a lot more power in their financial relationships than a typical consumer, but also are loath, to say the least, to abandon a treasury-management game that businesses have been playing since prehistory: demand immediate payments (even prepayment), but don’t pay yourself until the sheriff is coming up the driveway; meanwhile, use the float for a hundred purposes.

The irony is that the vendors of order-to-pay software systems can make a very good argument that discarding those old-fashioned treasury-management techniques is good business. Companies using order-to-pay systems, they say, free up working capital from their balance sheets, and that what they lose in float, they more than gain from being able to pinpoint exactly how much money they have on hand.

Tom Glassanos, for instance, president and chief executive of Xign Corp., points out that 19 Fortune 500 companies use his firm’s order-to-pay products, including Charles Schwab & Co., MetLife, Pacific Gas & Electric, and The Williams Companies.

But even he will concede that not every company thinks order-to-pay is a good thing. "There are good reasons why this hasn’t happened yet and continues to go slow,” he says. “There’s a certain (business) population that would like to get on board, but can’t get remittances across. And there’s a lot of work involved in telling your suppliers that you’re going to pay them via ACH instead of by check.”

The result, says Glassanos, is that “Just to get it to work, they find out, seems to them to be a lot more work than the value they get back, and they also have to deal with losing some float. So when they add the plus and negative columns, it doesn’t come out to be all that different, and they decide to go with what they’ve been doing.”

Banks are likewise not overly enthusiastic about the order-to-pay idea, except for US Bank, which has a patented order-to-pay product it calls PowerTrack. Even Glassanos concedes that only one bank uses his stuff, JP Morgan Chase & Co., which uses Xign in conjunction with Vastera, the trade receivables system which it bought early last year. Glassanos says two other big banks have recently signed on, but that he couldn’t disclose their names at NB’s press time.

Why the slow uptake at banks? The reasons are pretty simple. Banks make too much money from the various fees attached to business checking to embrace order-to-pay; for one thing, when you can charge your customer for removing every paper clip in a pile of checks, it’s a hard business to give up. For another, there’s no reason to expect checks to be disappearing anytime soon, so there’s little reason to close a profitable department, especially when most banks’ revenues are under pressure in the first place. And, banks tend to view change as something that has to be adapted to the bank’s interests, leading banks to come up with ideas that make sense for the bank, and not necessarily for the customer.

Card-based corporate payments systems, like Bank of America’s new ePayables product, are a good example. Cards would seem to answer a lot of problems for corporations, including digital data streams, easy tracking, and a means to mimic traditional pay-at-the-last-minute treasury-management games.

There’s only one fly in this particular ointment: The payee has to pay to get their money, in the form of interchange. The alternative would be to accept a discounted invoice in order to get paid early. “If you’ve been paying cash or check or anything for a transaction, the payor has been footing the bill, but here the recipient is paying for the transaction,” an unappealing prospect at best, says Penny Gillespie, president of Gillespie International, and one that payees can easily block.

Looked at this way, it’s not surprising that checks will likely linger—some would say malinger—for many more years. But there’s another reason, one that many overlook: Most businesses aren’t the Williams Companies or Pacific Power & Lights of the world. According to the U.S. Census Bureau’s 2001 Statistics of U.S. Business, only 26,000 companies had sales over $50 million, out of a total of 5.5 million; and only 103,000 of America’s 4.9 million firms that have any employees at all had more than 100 employees, although those larger companies employed 74 million of the nation’s 115 million workers.

That’s the real rub. There are some 5 million companies in the U.S. that have little time to  automate their accounts payable and receivables departments, which means that trying to sell them an order-to-pay system is a waste of time. At a minimum, the annual return on such a system is not enough to make a compelling case for expensive, complicated software. And payment cards likewise have little application, since smaller companies tend to pay higher discount rates.

This being the case, banks aren’t foolish to hold on to their business checking departments. And your local Postman probably isn’t headed for the unemployment line. (Contact: Xign Corp., 925-469-9446; Gillespie International Inc., Penny Gillespie, 703-815-0706)

Right around the corner is a world with neither cash nor payment cards. Contactless payments mechanisms—built into cell phones or even jewelry—are helping create this world, and the result will help change banking, thinks Theodore Iacobuzio, managing director of Tower Group’s executive research office.

The reality is that companies that once fed the banks’  payment networks—merchants, for instance—will be future competitors. But banks shouldn’t panic about this, any more than when, not so long ago, the Internet was supposed to be extinguishing banks. And banks won’t be disappearing now, either, thinks Iacobuzio: the anxiety over banking’s future, so prevalent in boardrooms around the country, is overdone.

END_OF_DOCUMENT_TOKEN_TO_BE_REPLACED

Our new Visa debit card arrived today from U.S. Bancorp. As we were reaching for the phone to activate it, we noticed a new URL on the holder <usbank.com/activate>.

Curious as to how the bank handled security on the process, we went online for activation. It turns out you must be enrolled for online banking. If so, you simply login, navigate to customer service, choose ATM/debit card options, type in your card number, security code on back, and expiration date (click on the inset to see the full screenshot). .

Analysis
This feature certainly falls into the "nice to have" category rather than "must have." The two-minutes it takes to phone in for ATM card activation once every two years is not on anyone’s pet-peeve list. And doing it online doesn’t even save much time, if any.

But, the bigger issue is making sure that all the routine customer service issues can be handled online, so customers think to go there first to manage their account. Overall, that behavior will save the bank money and if implemented well, improve customer satisfaction. 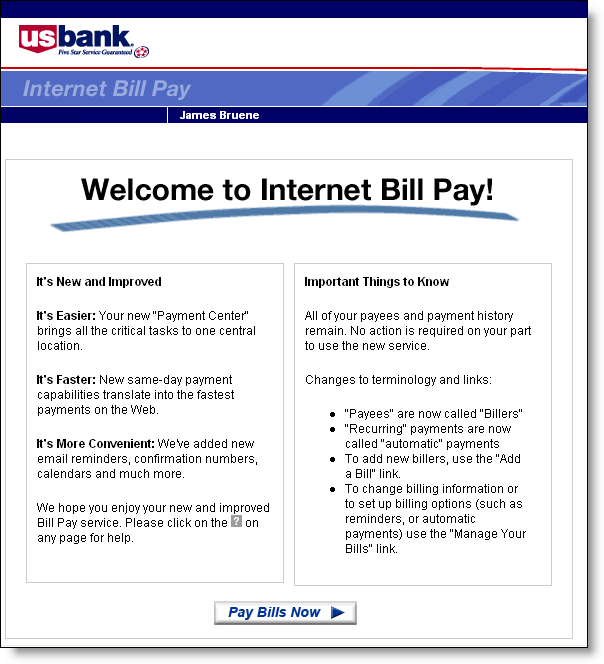 U.S. Bank, with more than 1 million online banking customers, just went live with CheckFree’s latest bill payment system (see OBR 113, p. 11). The improvements were communicated to current customers via a splashscreen the first time they went into the bill payment system (click on the inset above for a close-up).

The changes were also highlighted on a splashscreen after online banking login (see inset below). Customers also received a letter with similar information.

Analysis
The reason for this article is to highlight the effectiveness of splashscreens for communicating important new information. PayPal has been using this technique 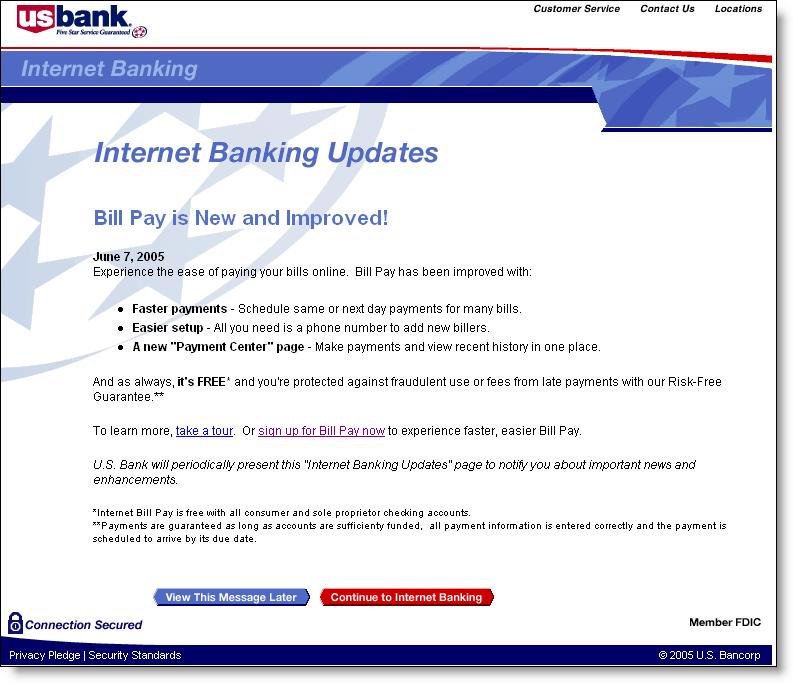 practically since inception and we’ve commented on it a number of times in Online Banking Report.

We are now starting to see the technique at other financial institutions. We believe it’s an extremely effective technique for two reasons:

However, you have to be careful not to overuse it. Anything more than once per month and users will start clicking past it like they do with most advertising intrusions.

If you are not using this technique, talk to your website development team, or outside platform provider, about how to incorporate it into your online marketing mix.

Usually we discuss innovations, this is an exception. We’ll call this a non-innovation, non-ovation for short.

In a time where all the huge Web-based email providers, led by Google’s free 1 GB of storage, U.S. Bank decides to delete emails sitting in customer in-boxes (within their online banking platform) after just 30 days. This includes estatement notifications.

Assuming the average customer gets one message per month, and each message is 2k in length, that saves about 20k in storage costs per customer, compared to keeping the messages for one year. Assuming the marginal cost for disk space is $10 per GB, that policy change will save an awesome 2 one-hundredths of a cent per customer per year, or $200 per 1 million customers.

Extensive online archive space is one of the biggest benefits of banking online. Don’t be pinch pennies on one of the lowest-cost aspects of your online Usually we discuss innovations, this is an exception. We’ll call this a non-innovation, nonovation for short.

In a time where all the huge Web-based email providers, led by Google’s free 1 GB of storage, U.S. Bank decides to delete emails sitting in customer in-boxes (within their online banking platform) after just 30 days. This includes estatement notifications.

Assuming the average customer gets one message per month, and each message is 2k in length, that saves about 20k in storage costs per customer. Assuming the marginal cost for disk space is $10 per GB, that policy change will save an awesome 2 one-hundredths of a cent per customer per year, or $2,000 per 1 million customers.

Extensive online archive space is one of the biggest benefits of banking online. Don’t be pinch pennies on one of the lowest-cost aspects of your online presence.