Four months ago (here) I wrote about how easy it was to set up a company page in Facebook. Even a total novice like myself could create one in a few minutes.

There hasn't exactly been a rush to do it, but approximately 50 financial institutions have posted a free company page on Facebook (see note 1). Although, most are simple "white page" listings with no more than logo, address, phone number and URL, it's still better than nothing.
(Update Mar 7: Please note, I am talking only about Facebook "pages" here. There are several banking "groups," notably Chase +1 with nearly 50,000 members, that are far more active. Also, some FI pages , such as TD Money Lounge and RBC Bankbook, do not show up in my search using "bank" and "credit union." Consider these counts approximations. )

Credit unions have three times as many as banks. Credit union's can often move faster because of their size and culture. Here's the count by financial institution type:

The only banks with more than a handful of fans are Jordan's Arab Bank with 145 and HSBC Bank Egypt with 89. Silicon Valley's Valley Credit Union (screenshot below) leads in the U.S. with 45 fans. 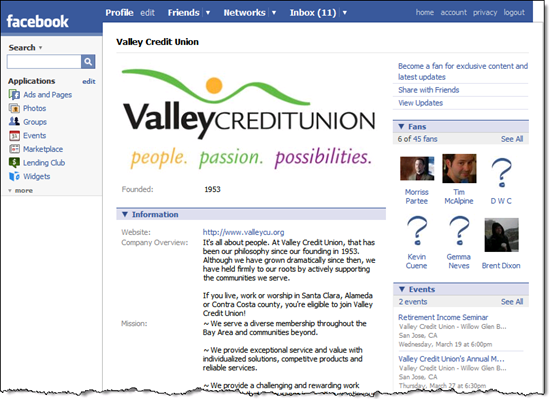 There's also one bank branch that's taken the initiative to post a Facebook page. U.S. Bank's Beaver Valley, Ohio branch (here) is one of the few to have posted something interesting, a $100 Super Bowl contest. They've also posted their branch hours (see screenshot below). 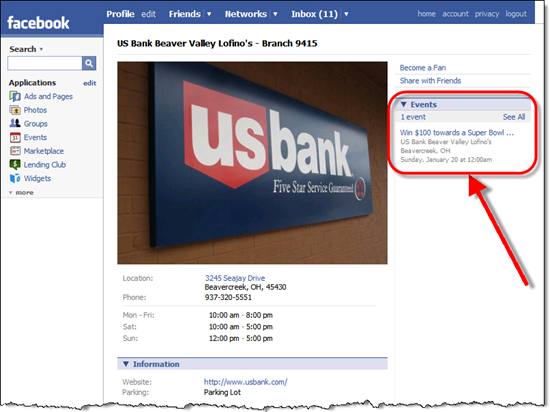 1. I counted financial institution pages by using Facebook's site search for "bank" and then for "credit union." To qualify the FI had to at least post the bank's logo and URL. There were also a few placeholder pages with no logo.