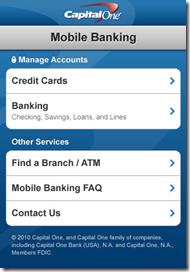 As hard as it is to believe, last year at this time only 30 financial institutions had apps in the U.S. iTunes App Store (note 1). And that was a full 18 months after Apple’s phone had opened its OS to third-party programs. A few in the industry still questioned whether smaller banks and credit unions would ever need a native iPhone app.

I think that question has been answered: In the past 12 months, the total financial institution app-count has rocketed upwards to more than 1,200, a 40-fold increase. That’s 100 new apps per month for the past 12 months.

In raw numbers, the past seven days have been relatively unremarkable with just 17 new FI apps. But it’s been one of the biggest weeks in terms of major launches: 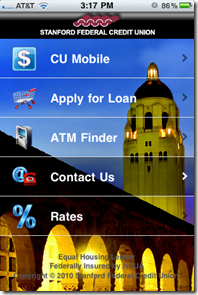 And while it’s not nearly as crucial as the iPhone, we are waiting for a slew of iPad apps. Apparently, BBVA Compass demo’ed a cool unreleased iPad app at a mobile conference (note 4). And just today, Schwab released its monthly magazine in iPad format, an industry first.

Notes:
1. See Online Banking Report #176, Table 18 (link subscription required)
2. Rank is of free apps in the Finance category in the U.S. store. The apps above it are #1 Bank of America, #2 Chase, #3 PayPal
3. HT David Eads in Mobile Manifesto
4. At the same conference as note 3, Bank of America revealed it hit the 6-million mark in active mobile banking users.

I go online at a Tully’s coffee shop every few weeks, but I don’t recall ever being pitched something outside the usual Costa Rican blend when logging in to its free Internet connection.

But today, Charles Schwab owned the Tully’s landing page, with three banners running across the page touting its High Yield Investor Checking among other things (see below). The two on the right have financial questions that, when clicked, take the user to an article on the Schwab.com site (see last screenshot).

The banner lower-left is more interesting. Little squares scroll across the banner in a very Web 2.0 way and, when clicked, additional info is delivered directly within the banner. Users stay on the Tully’s page unless they click the Open an Account Today button.

The three scrolling graphics include:

Comment: This type of grassroots marketing can be done by financial institutions of all sizes. Just find a local coffee shop or cafe and see if they’d like a little cash to subsidize that bandwidth each month. 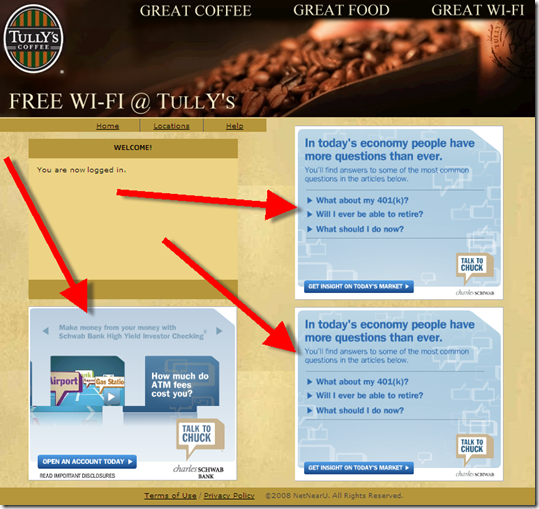 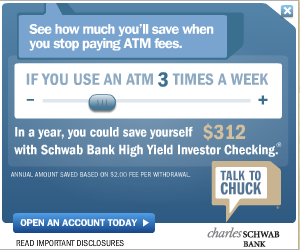 Clicking on How much do ATM fees cost you? in the banner above opens the following tool in the window. >>>

Users can move to the slider to calculate the cost of a foreign ATM. 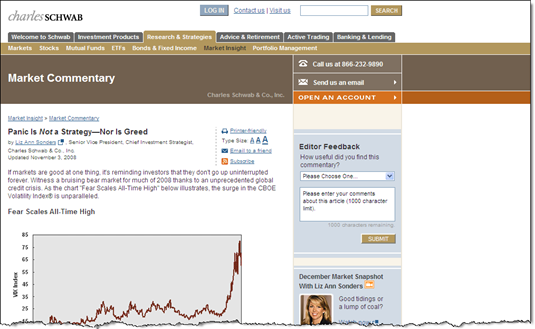 I never thought I'd see the day that Charles Schwab featured a checking account on its homepage (see note 1). Even Schwab, that built its business catering to do-it-yourself individual investors, wants a piece of those cash balances sitting in non-interest checking or low-rate checking/savings accounts.

With many major banks still paying next to nothing on deposits (as low as 0.10% annually on savings, see note 2), direct banks and other non-traditional outlets are still looking to grab deposit share even though most have dropped their promotional rates below the magic 5% mark (previous coverage here). 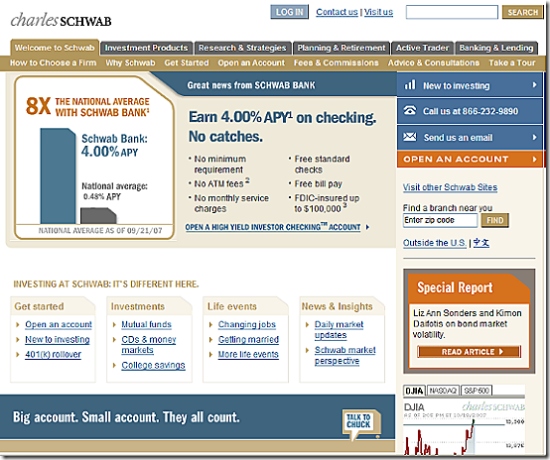 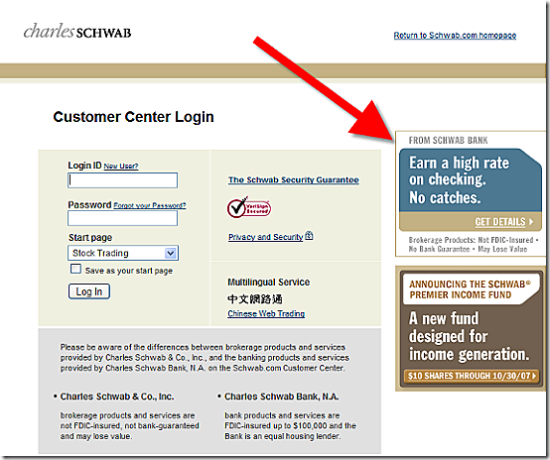 1. The bank promotion is on Schwab's main site, NOT a special landing page or Schwab Bank page. 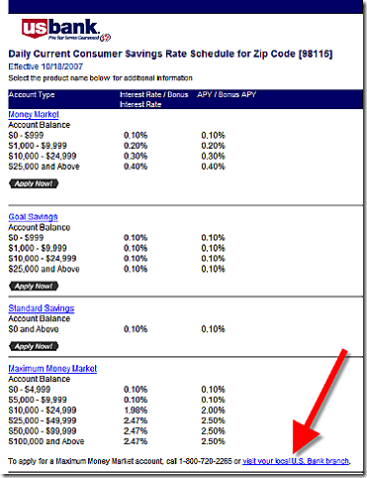 2. Memo to US Bank: Don't you think it's time to raise your savings account rates? I have my checking account at US Bank and was thinking of parking some cash for a few weeks in an interest-bearing account. But I was shocked when I looked at the rates. There is nothing I could apply for online that would pay more than 0.40% and most paid just 0.10% (see inset).

That's no typo; one-tenth of one percent on savings accounts across all balance levels. That's less than a $1 per month on a $10,000 balance! Pre-tax.

There's only one deposit account that cracks the 1% mark, Maximum Money Market, which pays 2% to 2.5% for balances greater than $10,000. But you can't even apply for that one online, you have to visit a branch.

I don't care how much you make on the so-called lazy money, a rate page that looks like US Bank's (see screenshot above) is a marketing and PR disaster.

The social networking phenomena has left financial services mostly behind. Aside from a few banner ads here and there (see E*Trade's clever animated ad on MySpace here), financial institutions have stayed away. The risks of a poor brand association have so far outweighed the benefits of putting the bank name in front of millions of younger users. An added problem: Do banks have enough street cred on these sites to make even a small advertising investment pay off?

Wells Fargo is the only major U.S bank to dare try. With four blogs, a MySpace page, an early Second Life presence, and even a placeholder on Twitter, the bank is dipping its toes in social media (see coverage here).

But not all social networks are about music and dating. Gather.com, the self-proclaimed "leader in social media for adults," boasts 210,000 members across nine channels: books, food, health, movies, music, news, politics, travel, and last but not least, money. The money channel, where I became member number 9,619 yesterday, has member posts in the usual areas: personal finance, investments, real estate, taxes and so on.

That level of usage is astounding. It's more than the combined total of eBay, Amazon, Google, MSN, AOL, and YouTube. Only Yahoo has anything close, with just under 9% share of time online. The only financial company cracking the top-20 was Bank of America, number 15 with 0.34% (see the full table at Compete's blog here).

There is no way that advertisers will ignore this much traffic. Financial institutions will eventually jump into social media sponsorships, especially as specialized areas are developed, such as Gather's Money channel. Advertising dollars follow the eyeballs so long as there is a viable advertising platform. And you can bet the large media companies that own the social networks will make sure they "monetize" the attention as effectively as possible. 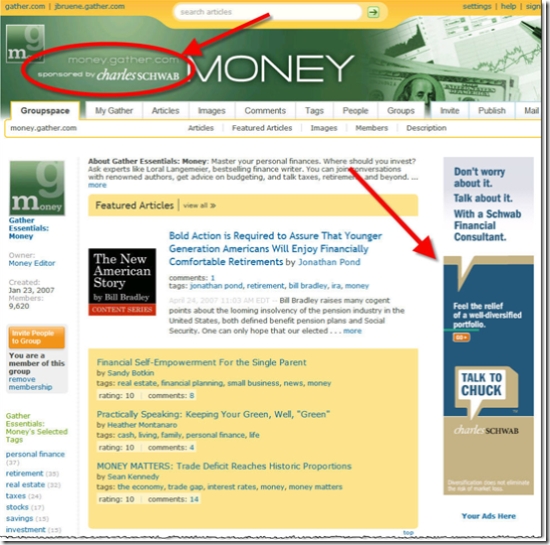 1. For those of you who haven't looked at the company financials recently, Schwab has about 7 million accounts and 300 branches. Here's the details from the press release (here):

Yesterday, I noted that TD Waterhouse was giving away iPod nano’s for new accounts. Well, it turns out that is nothing in the high-stakes game of bagging higher-balanced brokerage accounts.

In the middle of its homepage, Charles Schwab <schwab.com> is offering a night on the town in NYC, including 2 or 4 Broadway show tickets, dinner, and even a night in a luxury hotel. What’s the

Just $100k, $250k, or $750k in new money depending on just what level of "free" you’d like (click on inset for details). The deposit does NOT have to made to a new account, but like TD, all retirement and institutional account are excluded. (Click to view the homepage screenshot, links do not work)

Start saving your pennies, you’ve got until March 15, 2006 to qualify. 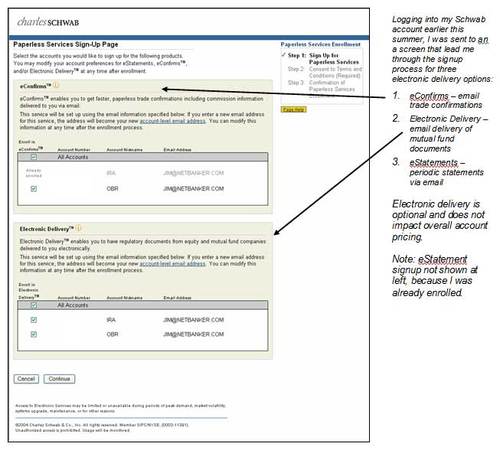