Cloud-based core banking technology innovator Ohpen has just sealed a Series C round led by private equity firm Amerborgh that will bring an additional $31 million (€25 million) in funding to the Amsterdam, Netherlands-based fintech. The company said that the investment will help it prepare for expansion into new markets, including the addition of a third headquarters in Germany, France, Canada, Australia, or the United States. The financing takes Ohpen’s total capital raised to $50 million (€40 million), and adds to a $17 million Series B investment the company secured from Amerborgh in July of last year.

“We’re just scratching the surface,” Ohpen founder and CEO Chris Zadeh said. “Ohpen is changing the core banking software industry, advocating a totally digital solution that is based on one version of the platform for all clients and countries.” He added, “This has never been done before; it requires creativity, commitment and also the necessary capital to implement our vision.”

Calling Ohpen’s core banking technology “the future of the core banking industry,” Amerborgh Nederland MD Michel Vrolijk emphasized the company’s ability to turn ideas into action. Vrolijk said the fintech’s ability to execute was “unparalleled” and added that expansion will be a key next step for the company. “Launching the third country is crucial for Ohpen’s strategy and Amerborgh is thrilled to support them at this decisive point in their growth story.”

Founded in 2009, Ohpen demonstrated its core banking platform at FinovateFall 2012. The company sees itself as part of the solution for financial services companies riddled with outdated legacy banking technology. Its core banking engine provides both BPO services and SaaS solutions to banks, insurance companies, and asset managers.  With more than 150 employees, the company has offices in the Netherlands, the U.K., and Spain.

Last November, Ohpen announced that De Volksbank, a retail and small business bank in the Netherlands had migrated more than 120,000 investment accounts to Ohpen’s platform. This followed a July partnership with multinational financial giant, Aegon through which the two firms will develop a new platform to support “the full scope of Aegon’s services in the Netherlands.”

Ohpen says the bank “has now completely and seamlessly integrated its investment services into its internet banking environments” using the vendor’s API.

“All investment processes – from the opening and maintenance of an investment account, to order execution and portfolio management – from the different internet banking environments of ASN Bank, BLG Wonen, RegioBank and SNS [de Volksbank’s brands] are managed in Ohpen’s core banking platform,” the vendor states.

De Volksbank carries multiple brands with a single back office and IT organisation. The product range consists of three core product groups: payments, mortgages and savings. De Volksbank has a balance sheet total of €62 billion and about 3,500 employees.

Founded in 2009 and headquartered in Amsterdam, The Netherlands, Ohpen demonstrated its core banking platform at FinovateFall 2012. The company picked up an investment of $17 million earlier this year in a Series B round led by Amerborgh. Chris Zadeh is founder and CEO.

Ohpen landed new funding to fuel its mission to develop the best core banking platform in the world. The Amsterdam-based company earned $17 million in Series B funding from Amerborgh this week, but its total funding remains undisclosed.

The investment boosts the company’s valuation to more than $114 million. Ohpen will use the funding to grow the company geographically, specifically to the U.K. where the company recently opened a new office. Ohpen received approval from the U.K. Financial Conduct Authority in January.

In a press release, Ohpen founder and CEO Chris Zadeh said, “The first step, back in 2009, was to actually develop a whole new core banking engine and offering it as SaaS using cloud technology,” Zadeh added, “The second step was to get a client and create a strong home base. After becoming the number one player in our home market, we knew it was time to enter new markets and truly scale up the company.”

Founded in 2009, Ohpen offers a cloud-based core banking API that gives banks a different option from legacy systems. At FinovateFall 2012, the company explained its multilingual cloud banking platform. Ohpen’s 100 employees have facilitated the execution of 14.6 million transactions in the past 12 months. The company recently won third place in the popular vote of the fintech impact awards at the NRC Live conference.

“Ohpen developed a fully automated and integrated multilingual cloudbanking platform for the operation, administration, reporting and distribution of mutual funds investing and savings accounts. The website as well as the mid and back office and CRM are integrated in one application. The idea behind the platform is that it should be possible to offer unlimited scalability, availability, security and flexibility of services. In addition, profound automation of processes and services is key.

The platform is being hosted in the cloud and therefore is not installed locally at the bank (as all old-fashioned financial institutions do). The choice for this hosting solution will result in a 90% cost reduction.

Use of the platform will limit the number of employees needed to run day-to-day operations and decrease investment in hardware and software.” 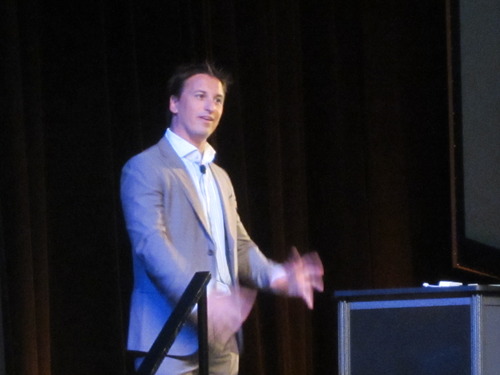