Last year, we predicted there would be 32 million U.S. households banking
online by year-end 2003. Actual results appear to
be slightly higher, with an estimated 33 million households as of Dec. 31.*

The payments area continued to be a major factor in the household growth,
as direct bill-pay at billers’ websites increased 20-fold, from 1 million
users at the beginning of 2001 to 20 million at year-end 2003.

Not only is online banking penetration growing, but the level
of usage is also increasing. Power Users, households that access bank
accounts AND pay bills, have grown five-fold in the past three years; from
3.5 million to 23 million. Less than half use their bank’s pay-anyone
bill-pay service, electing instead to go directly to the biller’s site to
settle the bill.

*More precisely, the year-end total is somewhere in between 29 and 36
million households based on our estimated accuracy of minus 12% and plus
10%. 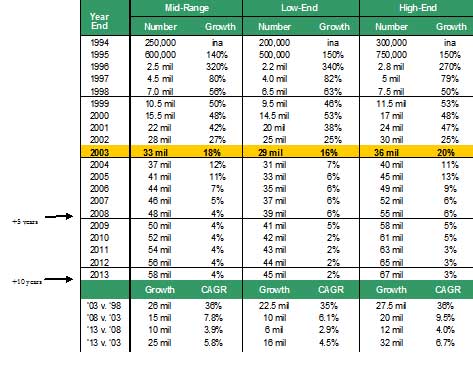 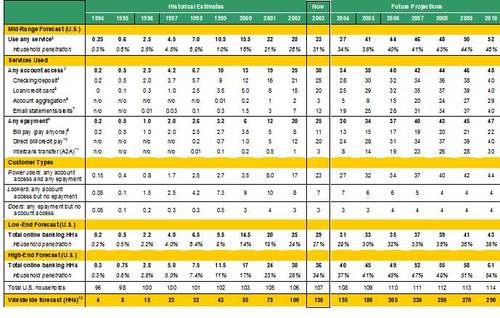 8)       Has used any of the 3 listed epayment services during the past 6
months; does not include online purchases using a credit or debit card (+/-
25%)

10)   Pays bills directly at the biller’s Web site, or directly with the
biller in response to an email message (+/- 35%)

13)   Includes online access for any checking, credit card, or loan
account used to process business transactions (can be a personal account if
used for business purposes)

14)   We use a broad definition of small businesses, including any
individual or entity producing $50,000 or more in annual revenues, includes
self-employed contractors and sole proprietors. 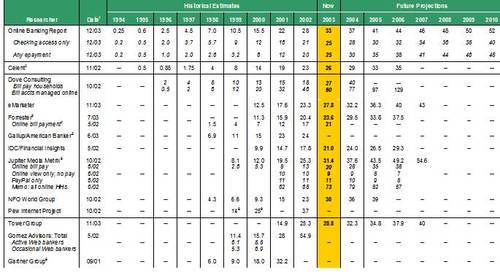 Notes: (1) Month/year the most recent data was collected; (2) Estimates
from 2001 and earlier were number of individual users, 2002 and beyond are
households with at least one member using online banking; the figures are
relatively comparable because up until recently very few households had more
than one person using online banking;
(3) Year 2000 estimate was made in Dec. 2000, 2001 through 2003 estimates
made in July 2003 and cited by eMarketer, 2004 to 2006 estimates made in May
2002; Forrester clients may access current forecasts at its website; (4) As
cited by the Wall Street Journal, 9/4/2002; (5) Estimates are not year-end,
the data is collected in late first or early second quarter of each year; we
assigned its market size estimates to the prior year’s year-end, e.g., we
assigned the March 2002 estimate to the year-end 2001 column; (6) Jupiter
clients can access new online banking forecasts published Dec. 2003; (8)
User base as of Sept. 2001 includes: 30.3 million tracking balances online,
17.6 million transferring funds online, 32.2 million doing at least one of
the two; in Feb. 2002, Digital Insight quoted Gartner as estimating that
18.3 million households banked online at year-end 2001

Source: Companies, 12/03           *Often left to the interpretation of
the survey respondent; who may or may not consider these activities part of
“online banking”

Source: Online Banking Report estimates, accuracy estimated at plus or minus
12% U.S., 25% worldwide

millions of U.S. households and percent change from previous
year

Source: Online Banking Report estimates, 12/03; accuracy estimated at plus
or minus 12%

As the market has matured, we’ve noticed much less variance in the estimates
from most major researchers. Most of the differences can be explained by
variances in the definition of what constitutes and online banking household.
For example, Gartner counts all banking products, including
checking/deposit accounts, credit cards, bill payment, and email payments, while
Jupiter tracks payment accounts separately . Another major difference:
Gartner tracks individual online users while Jupiter, Forrester,
and most others track household usage.

At OBR, we track at the household level because it’s consistent with how
financial providers usually look at the market. And like Gartner, we use the
broadest definition of an online banker (Table 4, below) including
deposit-account access, electronic bill payment, credit card access, and
biller-direct payments.

Someone in the household must have done at least ONE of the
following during the past 6 months:

*Any connection from home, work, school, or other place where data can be
viewed through any device (Web phone, browser, proprietary software,
Quicken, Money, etc.) 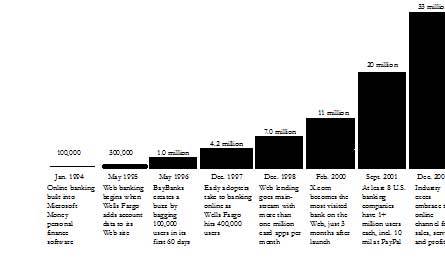 Source: Online Banking Report estimates based on industry data plus or
minus 15%, 12/03

Every spreadsheet and business plan needs a prediction of
future demand. So every year we gather forecasts made by prominent researchers
and analysts, compare and contrast their results, layer on our own insights, and
develop a 10-year forecast. Accuracy is estimated at plus or minus 15% for years
one through three, plus or minus 20% for years four through seven, and plus or
minus 25% for the out-years.

Over the years we’ve demonstrated a respectable track record . Our first
comprehensive forecast made six years ago (year-end 1997), predicted that online
banking usage would increase nearly 6-fold (560%) from 4.5 million in 1997 to 29
million households by year-end 2003. That prediction was nearly dead-on, perhaps
10% low, with an estimated
29 to 35 million households banking online today.

To many long-time bankers, online banking hadn’t proved its worth prior to
2003. However, with usage surpassing 30% of all U.S. households, and with
leaders such as Bank of America pushing past 40%, even the skeptics are
beginning to recognize the potential. By the end of the decade, total U.S.
penetration is expected to approach 50%.

Unlike many new technologies, online banking delivers on three levels:
improved customer satisfaction, increased sales, and cost savings. Now that
these institutional benefits have actually been documented, the rest of the
decade promises to see an extraordinary build-out of online capabilities, much
like the explosion of ATMs in the late 1980s as the channel became profitable.

Looking back at the last year, three changes stand out:

On the innovations front, it may not have been 1997 again, when seven of the
20 all-time top financial innovations debuted, but there were several
significant developments including:

The next few years promise a whirlwind of activity as financial institutions
implement fixes to email-security concerns, expand the level of email-alert
services, dramatically increase online cross-selling and self-service, and see
tangible benefits from the investments of the past six or seven years. Online
banking initiatives will once again be prominent on the radar screens of top
execs. Enjoy the spotlight.