“Today, consumers’ wallets are stuffed with payment, gift, loyalty, membership, IDs, insurance cards and more. The LoopWallet app allows consumers to securely scan, store, and organize all their cards and use them to pay with their Loop-enabled smartphone or smart accessories nearly  everywhere credit cards are accepted.”

Ladies and gentlemen, the LoopWallet has landed.

Now available in the Apple App Store, the LoopWallet app allows consumers to make their mobile device their primary, point-of-sale payment method instead of cash or cards.

The Android edition of the app is expected to be available in April.

“Just download the free LoopWallet app, order a Loop AppCessory, swipe your cards into your smartphone, and pay at almost everywhere in the world.”

Loop AppCessory’s are tools – fobs, charge case, primarily, with more to come – that allow users to swipe their cards and store information alongside their mobile device. Credit, debit, gift, ID, membership, rewards … most of the kinds of plastic currently stuffing the average wallet can be stored in the LoopWallet app.

When shopping, consumers place their smart device near the swipe slot on the POS terminal, and press the transmit button to make the transaction.
Loop is Level One PCI-compliant, and data is encrypted and stored in secure memory in the LoopAppCessory. That said, the company’s relationship with card issuers is such that Loop can provide per transaction, dynamic card data, making it impossible for fraudsters to clone your card.
Watch Loop’s intro video here.
Loop was founded in 2013 by Will Grayin and George Wallner, and is headquartered in Woburn, Massachusetts. The company has raised more than $10 million, and is among the innovators scheduled to demo at FinovateSpring 2014 in San Jose in April. To learn more about the event, visit our FinovateSpring page here.

“We want to simplify things for the user. Loop is a secure, mobile wallet solution accepted nearly everywhere on day one.”

I’m near the end of my briefing with Damien Balsan. Damien is COO for LoopPay, a mobile payments company that is leveraging its expertise in magnetic secure transmission (MST) technology to make it easier for consumers to pay with their mobile devices.

We aren’t talking about the company’s upcoming announcement of a $10 million Series A, an oversubscribed round with participation from a number of undisclosed angel investors. And unlike everybody else in the city, we are also not talking about Seattle’s unseasonably frosty December (then again, LoopPay is a Boston-based startup…no weather sympathy there.)

What we are talking about, though, are things like the looks on the faces of the baristas as Damien pays for his latte with a wave of his smartphone. “It’s not just kids,” he said when I suggested that the excitement for the product among the under 30 set was a good sign. “Even the 70 year old clerk at the hardware store was amazed.”
Damien shows me his wallet, which like the wallets of most people is about the size of a Big Mac sandwich. This is Loop’s Public Enemy #1. And in its place Loop offers a way to load identification, credit, debit, gift, and other cards into a handful of alternative devices, from a finger-drive sized fob (Loop’s first “Appcessory”) now shipping to a variety of charge cases expected to be available in the first quarter of 2014.

It’s worth underscoring that “mobile” does not only mean “mobile phone.” Loop’s technology involves a secure chip, located in the Loop fob or the charge case. This gives the user further options to pay: with the phone in hand, or simply via the fob. “At a restaurant,” Damien said, “you could simply give the fob to the waiter” and your phone stays at the table with you.
There are a number of compelling features that are likely to help Loop stand out in the increasingly crowded mobile payments space. But the company’s technology breakthrough: the ability to project a short-term magnetic field that impersonates the action of swiping a mag stripe through a card reader, appears likely to deliver on the contactless promise of NFC without the hardware adoption headaches of NFC.

And NFC isn’t the only payments-related acronym Loop is challenging. Will Loop’s technology survive the transition to the EMV standard in a few years?
EMV stands for “Europay MasterCard Visa” and is a technology standard commonly used in Europe. EMV swaps out the kind of magnetic stripes Loop’s technology has mastered for a chip-and-PIN approach to initiating transactions (and, arguably, doing a better job at reducing fraud).
While not overly specific, Damien suggested that Loop is already looking at a number of solutions, including the use of a more dynamic field that would be compatible with the EMV standard (cards are typically held in the reader in the EMV case, rather than quickly “swiped” through). 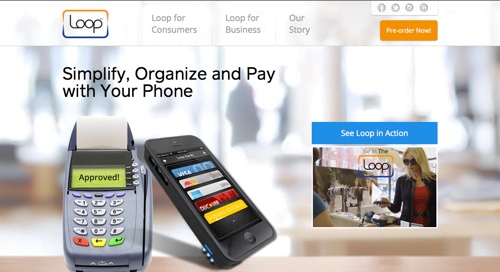 Loop’s business plan is largely B2C, though the company is looking to build relationships with phone makers, and to have those manufacturers include Loop in their units.
The company was founded by Will Graylin and George Wallner, both long-time veterans of the payments industry. Will was previously founder and CEO of ROAM Data, a mobile POS and mobile payment solutions provider bought by Ingenico. George had founded and served as CEO of Hypercom, a leading global POS provider eventually acquired by VeriFone.