Bank of America on Wednesday dropped a set of 12 clever video segments called #LLOVEYOURAPP. You can see them all on the BofA YouTube channel. Most have 100 to 200 views, so they are virtually unknown so far. I’m guessing that is about to change as they are pretty clever. For one, a cud-chewing llama is demoing features of the BofA mobile app; for two, they remind me a bit of E*Trade’s baby series that for many years ran in the Super Bowl and elsewhere.

I don’t know what the plan is for them, whether they are to remain a social media play or will eventually run on TV (each one is either 15 or 30 seconds, so made for TV). I first spied them this afternoon via a Google+ promo next to a BofA email newsletter I received yesterday (see screenshot below). And the bank tweeted it once today and replied to a few more with the #LLOVEYOURAPP hashtag.

Even before the next installment of its popular talking baby runs later today during the Super Bowl, E*Trade has already scored.

Through advance publicity and select print ads highlighting the “baby URL” <etrade.com/baby> (note 1), the online broker/banker has already landed more than 2 million views of the outtakes for today’s Super Bowl ad. And the clip was posted to YouTube just nine days ago (22 Jan. 2009).

The E*Trade outtake clip (below) currently ranks 13th on the most-viewed videos of the month at YouTube, an extremely high level of popularity for a corporate-sponsored clip unrelated to music or film.

Demonstrating the power of making YouTube’s most-viewed list, the E*Trade outtake clip is only 100,000 views shy of surpassing the Trading Baby clip from the 2008 Super Bowl, a video that’s been online for a full year.

All clips are posted on the company’s official YouTube page (see below). 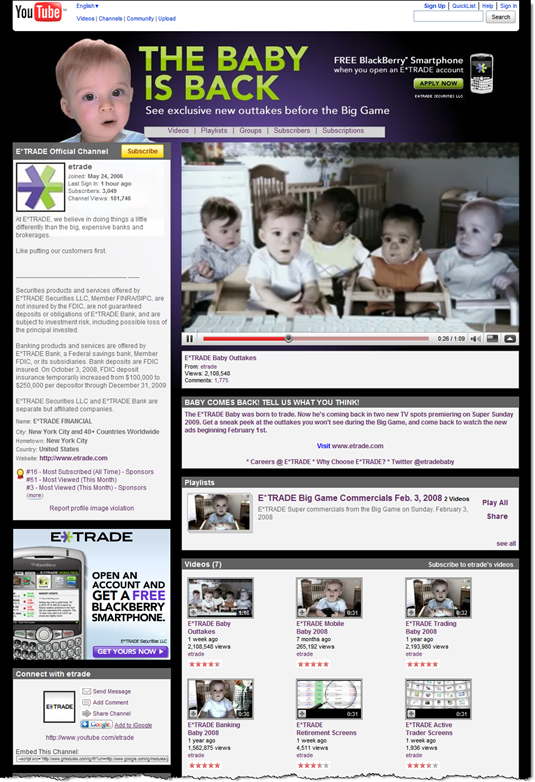 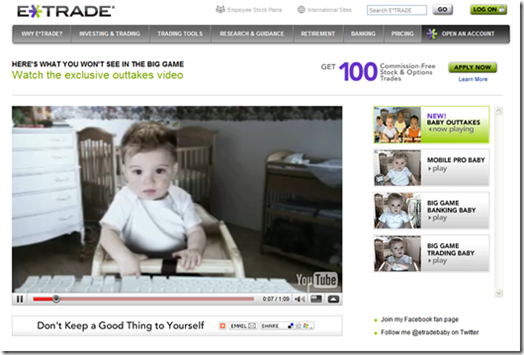 Note:
1. The E*Trade baby teaser ad ran in the 31 Jan. 2009 Weekend Wall Street Journal. The quarter-page ad, one of only six ads in the entire paper, ran on page W6 (West Coast edition).

We were surprised to learn today that someone beat Community Lend to market, becoming Canada's first person-to-person lending exchange (previous coverage here). The Montreal-based startup, IOU Central, says they've been working on the company for a year.

The company merged with an established Danish person-to-person lender FairRates <fairrates.dk>, whose co-founders, Robert Bialek and Arkadiusz Hajduk, are now on the IOU Central team.

Much like its U.S. counterparts, Prosper and LendingClub, IOU Central facilitates installment loans of up to $25,000 CDN, with terms of up to 3 years.

The company's homepage includes a YouTube video of its President, Phil Marleau, giving an 80-second overview of the company. Even more important, they have a testimonial from a former TD Bank EVP to the right of the video (see screenshot below).

The company issued a news release today (here) that was picked up by several blogs (here and here). For more info on the market for P2P loan, and what financial institutions should do about it, see our recent Online Banking Report (here). 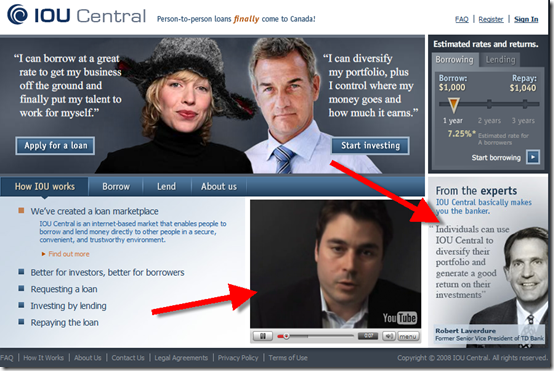 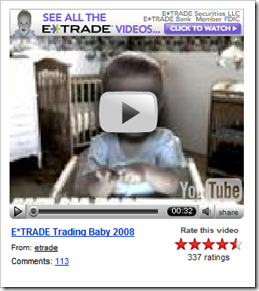 Even before the big game Sunday, E*Trade was showcasing its SuperBowl ads on YouTube. Six hours before kickoff this ad (inset) was displayed next to search results for "etrade," "banking" and other terms (note 1). The "trading baby" video had been watched just a few hundred times when I saw it yesterday; this morning, it has had more than 90,000 viewings.

Later in the day on Sunday, E*Trade also added a link to the videos from its homepage (screenshot below).

The Commercials
E*Trade ran two ads within a few minutes of each other early in the second half. "Trading baby," shown above, uses an adult voiceover to discuss how easy it is to trade online. The second ad, "banking baby" (embedded below), showcases the company's high-yield savings account. This has to be the first, and probably last, time a savings account product received SuperBowl advertising exposure. It has 107,000 views in less than 24 hours.

Both ads ended on an upbeat note, saying that E*Trade was opening a thousand accounts per day, a great message against the backdrop of negative publicity the company received a few months ago with its subprime problems. 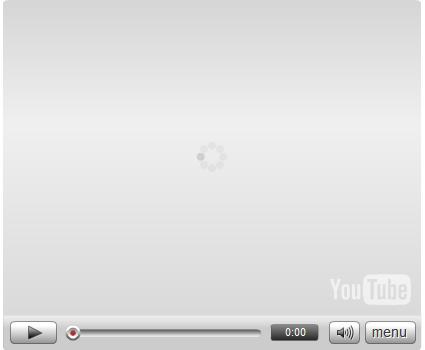 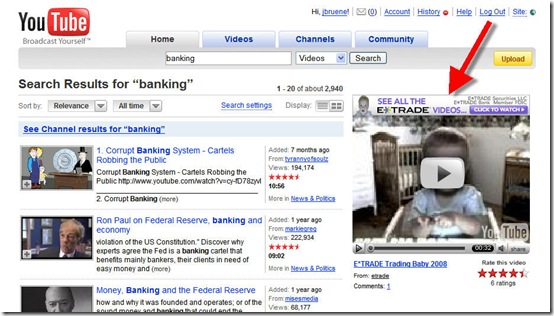 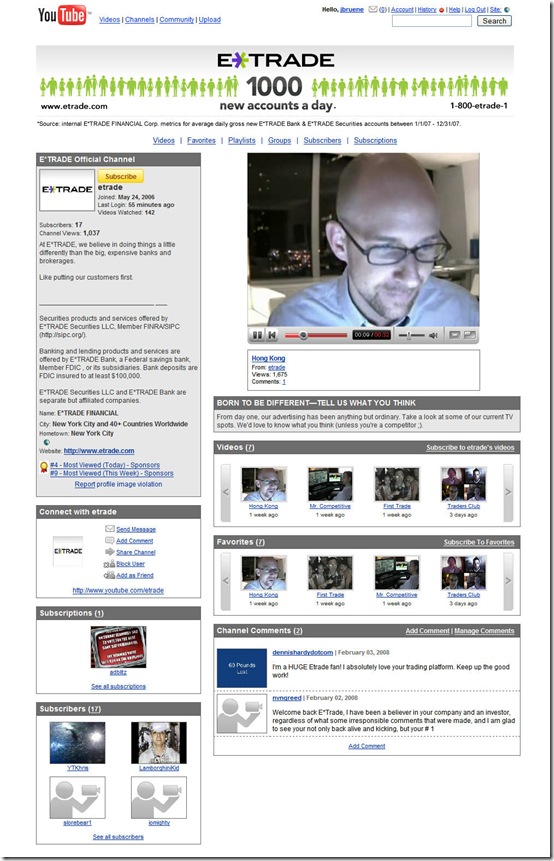 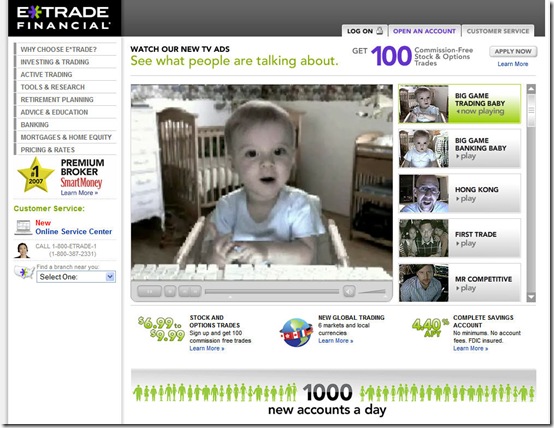 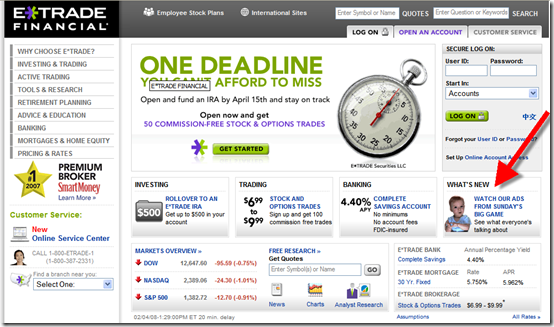 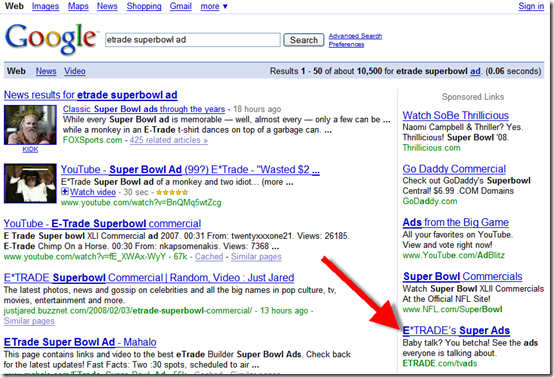 Update July 30: I don't know if it was me or YouTube's search function (probably the former), but I missed at least six other entrants into the Lending Club contest. While I'm still surprised there are so few — as of 11 AM Pacific today, there are 10 total entrants here — that's MUCH better than three. What's more important: several are approriate and relatively clever. The current leader here, and probable winner, has nearly 5,000 views and will be hard to catch. Another thing I missed, the company DID put the contest in its blog here. I apologize for the errors.

Start-up, P2P lender Lending Club is sponsoring a user-generated video contest on YouTube. The most popular video wins $5,000, and in addition to its blog, the contest is also discussed in the lender's Facebook Group (screenshot below). Despite this exposure, the contest doesn't seem to be widely known. We read about it last week on a P2P lending blog called Prosper Lending Review.

Right now, it looks like someone's going to make off with an easy $5k. The contest, which began July 17, and ends on Aug. 10, has only two entrants posted on YouTube, at least using the correct tab "Lending Club." One is recorded so softly, you cannot understand a word of it, another features a guy reading website copy on his couch, and the last one is a dubbed-over 1-minute clip from the Hound of the Baskervilles. I don't want to skew the results by linking to them. Trust me, you don't need to watch them.

And since the winner is the video with the most cumulative plays on Aug. 10, new entrants have less than 2 weeks to rack up more than the 2,000 views of the current leader.

A few lessons from this effort:

Lesson #1: While the contest is a great idea to generate low-cost buzz, and perfect for a Facebook-based app like Lending Club, the lesson here is that you need to run it longer so the contest can create its own viral momentum. Three and a half-weeks just isn't enough time for the word to get out to enough creative types and for them to get something interesting recorded, uploaded, and for it to catch on with YouTube viewers. In contrast, see our coverage of Intuit's TurboTax Rap which generated more than one million YouTube views (previous coverage here).

Lesson #2: Lending Club was apparently testing the power of FaceBook groups, creating a special one just for the contest called, "Lending Club Contest — Win $5,000." The lender did not mention the contest (see update above) on its website. But unfortunately, the Facebook club has only 57 members after two weeks and doesn't appear to have the horsepower to spike enough word-of-mouth buzz on its own. I'm sure they will do it differently next time.

Lesson #3: You might want to include a clause in the contest rules stating that videos containing pirated content or profanity, are unintelligible or not understandable, are not allowed. That would eliminate all three current entrants. Here's the official rules posted at Facebook. 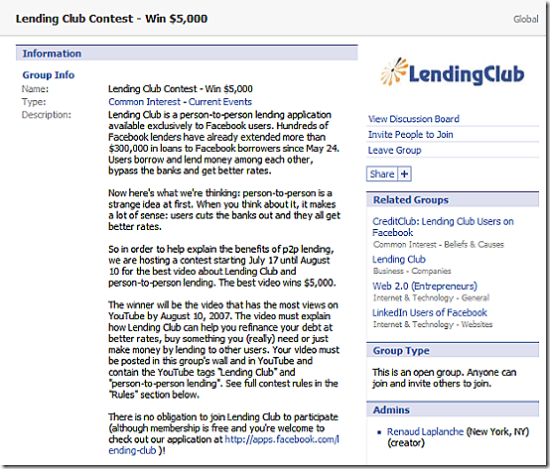 YouTube is mostly an entertainment site, but it also can be used by businesses in a number of ways. The best example in financial services is Intuit's viral TurboTax Rap which has now attracted more than 1 million YouTube views, if you count the parodies (previous coverage here).

The credit union posted four television commercials and another homemade video they called a "podcast."* Total views of the five spots is about 500. While that may not drive much new traffic, it's a smart move considering the minimal time and zero cost to post content to YouTube.

And, for first-movers such as Tech CU, the ability to garner press and blog attention is an added bonus.* While Tech CU hasn't done this yet, embedding YouTube videos into your website is a great way to make your website look more modern and get additional mileage out of your television advertising.

So far, Tech CU has only mentioned the YouTube page is a press release about its new television ads (here). But, I'm sure more integration is coming. 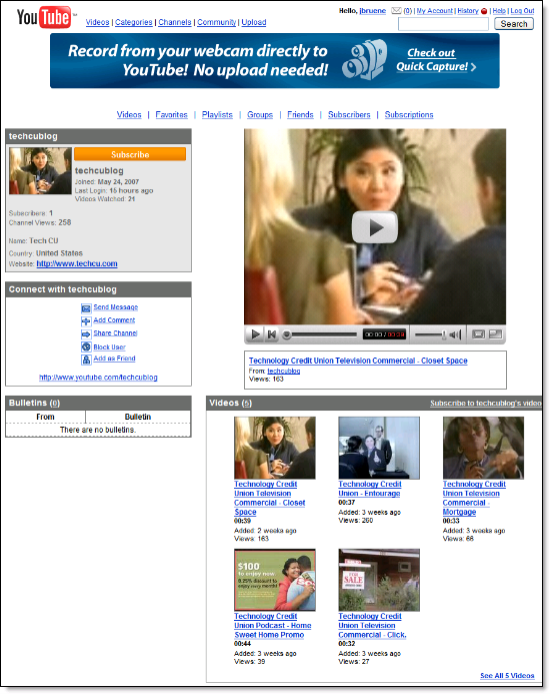 *Tech CU took a little heat at OpenSource CU about the commercial masquerading as a podcast (see discussion here). However, Tech CU ended the criticism by explaining that the podcast was a test.