Here at Netbanker/OBR, we love to write about the digital future. But we know it’s even more important to address the digital now. If you don’t leverage current technology to your advantage, the future doesn’t much matter, since someone else will be running your business.

Today’s topic, one that we used to harp on constantly, is alerts (see previous “Alerts” posts).  Alerts are the way you maintain the relationship with customers between logins. But too many banks and credit unions take email alerts for granted, and are still using a template from 2004! Those templates were created prior to webmail, and, more importantly, before mobile viewership skyrocketed.

One bank whose messaging template was too long in the tooth is Chase (it’s looked the same since at least 2010; see note 1). But as part of their continued digital remodeling, the bank changed it last week. It’s not going to be confused with Simple or Mint, but it communicates the important information efficiently. And that’s enough for most brands.

Following are the before-and-after shots on the desktop. As you can see, the old version was too wide for smaller laptops and lower-resolution computers. On my Mac it looked fine, but on my trusty old ThinkPad, it required horizontal scrolling to see the “total withdrawals.” 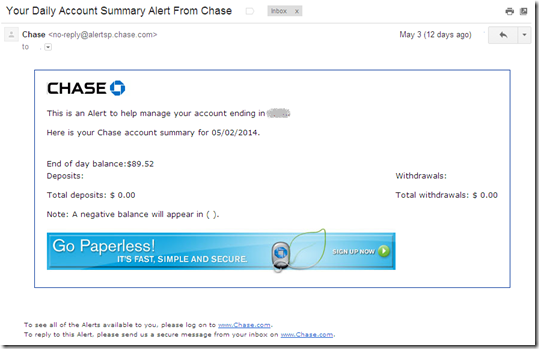 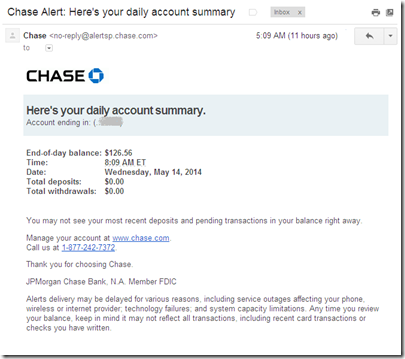 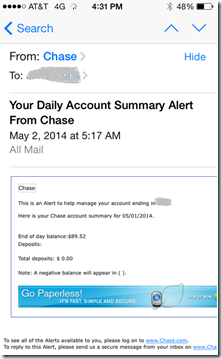 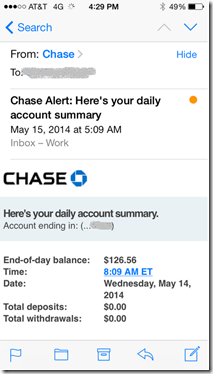 Notes:
1. The UI described here is for a Chase checking account in Washington State (converted from WAMU). This email alert template may be different in other regions or for other account types.
2. For more info on alerts and messaging, see our 2010 Online Banking Report (subscription).