Last week, I attended the BAI Retail Delivery conference in Boston (for more background on the event, see note 1). I enjoyed the show tremendously.

What’s not to like? Famous speakers, new products, several thousand attendees, statistics galore, and a floor filled with new bank tech. For me, the only disappointments were the non-industry keynoters, who are not why I attend, but are something to tell your friends and family about when you get home (note 2).

Like last year, I’ll cut to the chase and hand out my personal awards for the event. I saw only a tiny fraction of the companies, so the list below shows merely my favorites culled from about two dozen company interviews.

And I’m always collecting usage stats and other numerical detritus delivered during the presentations. Here are my notes with (source in parenthesis):

Worklight widgets running on a variety of platforms (4 Nov 2009) 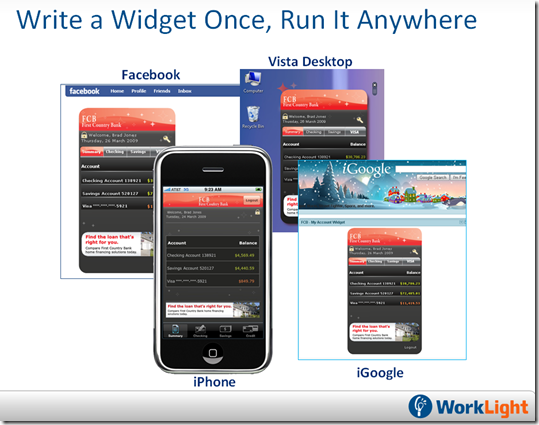 Notes:
1. About BAI Retail Delivery Conference 2009
BAI Retail Delivery is an annual rite of passage for bank tech strategies, delivery system analysts, and product managers. At the peak, in 1999/2000, there were as many as 10,000 people there (attendees + exhibitors) and close to 500 exhibitors stretching perhaps three or four city blocks in each direction through cavernous exhibit halls. It was a little like Times Square but without the highrises. Some exhibitors had massive 10,000 square foot booths filled with hardware. And the show-floor routinely sold out.

Financial institutions brought teams of people to pour over the new machines and software solutions, be inspired at the general sessions where Bill Gates, Roll Perot, Scott Cook, and other tech-industry luminaries showed up to win over the bankers.

Fast-forward a decade. It’s still an awesome event which I highly recommend. I thoroughly enjoyed every conversation I had and most every session I attended. But the event has downsized considerably. This year, you could walk across the exhibit hall in a few minutes. And if you wanted to, you could have spent five minutes with all 180 companies during the show hours. That would have been impossible last year with around 300 exhibitors. But all-in-all, I’d say there was more energy on the floor this year because the attendee per square foot ratio seemed much better.

2. Unfortunately, on Thursday both Al Gore (planned) and Jack Welch (unplanned back problems) phoned in their keynote addresses via sat-link.