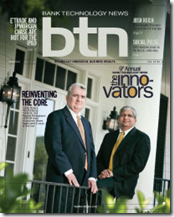 BankSimple has already become well known among the digerati and its notoriety is spreading to the mainstream press (here and here). Bank Simple’s latest PR coup was being named Tuesday to the Bank Technology News annual top-20 innovators list (see note 1).

Quite a feat for a company that hasn’t yet launched or even shown its service outside a small group of testers (note 2).

Lifehacker Asks, “Are you happy with your bank?”
Lifehacker, a popular blog (note 3) that deals with personal productivity and other minutiae of day-to-day living, positioned the BankSimple story as a backlash against traditional banks in a post titled, “Are You Happy with Your Bank?”

After a few speculative paragraphs about Bank Simple, the blog concluded with a quick poll to see how motivated its readers were to switch banks. I expected this self-selected sample to be very anti-bank. But surprisingly, more than half the 3900 voters declared themselves relatively satisfied with their bank. Only 13% said they were unhappy and another 30% said they’d consider consider switching.

Given the sample bias, you can’t read too much into the the data. But it does demonstrate that even in a worst-case polling situation — where participants are pre-conditioned with a vision of a utopian entity that does everything right with nary a fee — it’s still difficult to budge consumers away from their existing bank/credit union.

Notes:
1. Four recent Finovate alums were also listed: Backbase, CashEdge, Intuit, and Segmint (see our Finovate blog post yesterday).
2. If you read all the published articles, a fairly thorough picture of Bank Simple emerges. It will not be a bank, but a simple web 2.0 interface (e.g., Twitter/Tumblr) on top of a checking account (e.g., what PayPal did for online payments ten years ago).
3. According to Compete, Lifehacker averages about 1.2 to 1.5 million unique U.S. visitors each month.