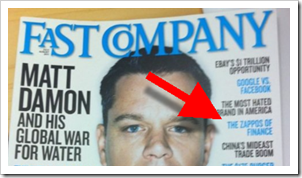 Yet-to-be-launched BankSimple scored more great press this month with a tease on the cover of the July/August issue of Fast Company:

The Zappos of Finance

The one-page profile in the magazine’s Next column (p. 32) is titled:

A Bank that Doesn’t Suck

For Netbanker readers, the article mostly covered familiar ground. However, there were two huge reveals near the end that I almost missed; two banks the startup is working with to power its services:

BankSimple has a wait-list of 50,000 for beta invites. According to the article, 12,000 of those will be allowed in by year-end before its general-public launch in 2012.

Notes:
1. The Bancorp is a Finovate sponsor
2. It took 119 years for the bank to get to $6 million in deposits for a net growth of $50,000 per year. They’ll get that much in the first 10 minutes after BankSimple opens its doors.