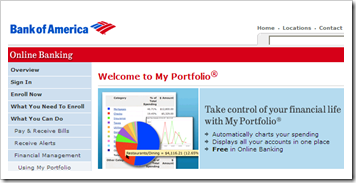 Two months ago we published a table (here) showing active users at the leading online personal finance startups. Below is the table, updated with March traffic and the addition of one more player: Bank of America.

The bank, which offers a full-featured online personal finance management solution called My Portfolio, powered by Yodlee, has 2.5 million active users, according to BofA exec Marina Moore (note 3). That's an impressive 10% of the bank's online user base, and about 6x the total user base of all the online startups combined (note 4).

1. Users: per BusinessWeek Online, Feb 2008, figures are reported by the companies and may include inactive users; Mint has been updated to 180,000 from 130,00 based on new figures reported in the Bank Technology News article published in April 2008

3. As reported in a Bank Technology News article published in April 2008.

4. This table does not reflect all the players, such as Intuit's new Quicken Online, just the ones highlighted in the BusinessWeek article.