I love personal financial management websites. Not so much for the reality, actually I hate tracking expenses, but for the promise. The illusion of having everything under control, never overdrafting, never missing a payment, and with perfectly-shaded multi-color pie charts just a click away (inset from Mint).

But I’ve always thought that once banks and credit unions added basic PFM functions to their online banking services (see note 1), it’s game-over for most independent PFM sites. They would have to either license their platform to financial institutions, sell out, or close their doors.

Now I’m not so sure.

Mint did something recently that made me reconsider. It was really pretty simple when you think about it. Yet as far as I know, no bank, card issuer, or even credit union has ever taken this on.

The Mountain View, CA-based startup scanned their members’ credit card statements to identify bogus charges from a known scam. And the company plans to make the resulting fraud alert service a standard part of its offering.

Mint Software Inc. is planning to roll out a tool that will automatically scan its 800,000 users’ accounts for potentially bogus charges….Aaron Patzer, Mint’s founder and chief executive, said the idea for the new product came after his company heard of a scam involving Adele Services of Melville, N.Y., a bogus merchant that was making 25-cent charges to millions of consumer accounts. The news was widely reported, and Mint decided to check its users’ accounts its to see if any had been affected; it found 800 that were.

Score 1 for the upstarts.

Bottom line: If the online PFM purveyors harness technology to take better care of banking customers than the banks themselves, especially with practical, money-saving ways such as Wesabe’s Cutback Tool (below), the newcomers have a bright future indeed. 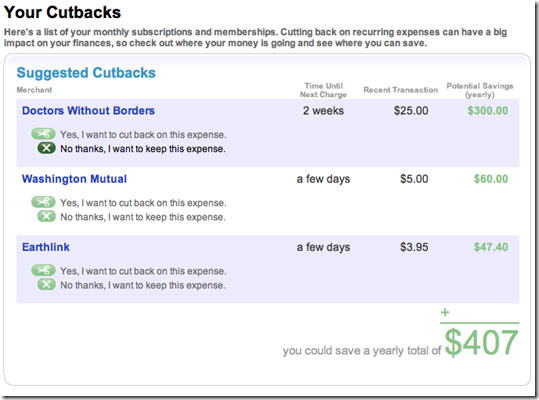