The time-saving feature was added to Quicken several versions ago, but it's still not yet supported at any financial institution or credit card issuer (see Online Banking Report: Personal Finance Feature for Online Banking here). While it won't change the world, it sure eliminates one of life's little hassles, the decision each time you transact online as to whether you really should "print out this page for future reference" (and where to store the pesky printout if you do.)

How image capture can be enhanced in the future:

Billeo's Screenshot Capture Feature
To save a screenshot of a payment confirmation, or anything else, users select the shopping button on the Billeo toolbar. That causes a popup to appear (see inset for closeup) where the user selects the bank/card account, enters a transaction description if desired, chooses a page type, selects the correct purchase amount from the values scraped from the screen, and edits the date paid if necessary. 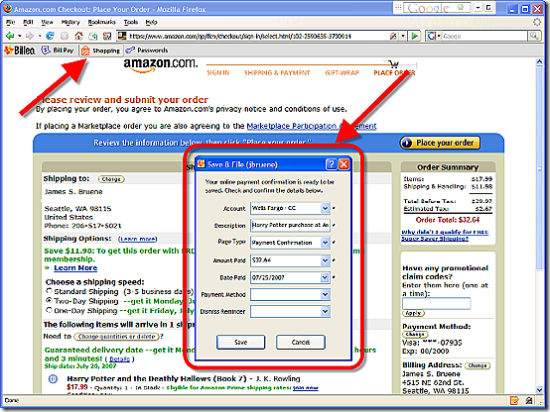 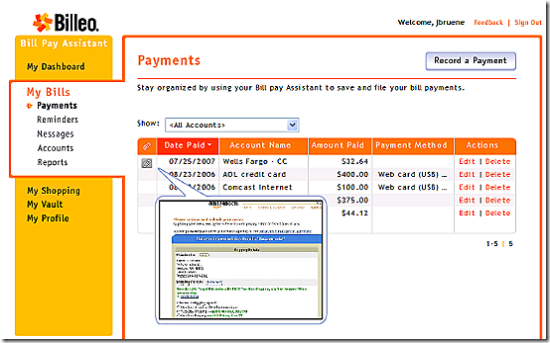 Wesabe's Screenshot Capture Feature
To save a screenshot, users click on the Wesabe button on the Firefox toolbar. A few seconds later, the screenshot loads (second screenshot below) and users choose whether to "upload to Wesabe" or "save to disk" or both. After the picture has been saved, the user closes the screen. In our test, save-to-disk worked as expected, and it was easy to retrieve the file through Windows Explorer. However, although the upload to Wesabe seemed to work, we couldn't figure out how to access the uploaded screenshots within our Wesabe account. 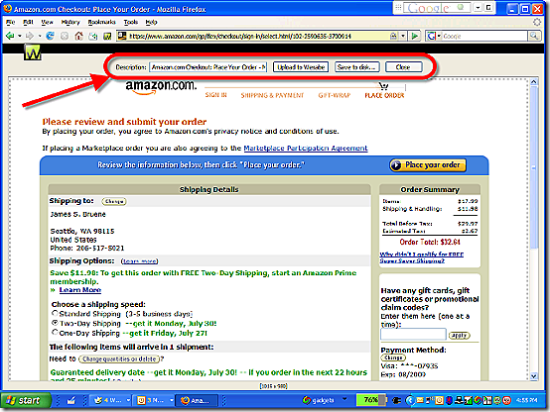 1. Billeo has supported page-capture since its 2005 launch, but it was not integrated into the payments-transaction register.