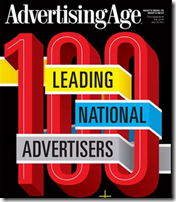 Internet spend (note 1): Experian was the #1 spender online among all companies in all industries with a reported $350 million. That amounts to more than 3% of the entire $10 billion spent online in the United States last year across all industries. The credit-reporting giant didn’t spend enough offline to crack the top 100 in total advertising, which means at least 80% of its total spending is online.

In terms of percentage of all advertising, the totals varied widely. On the low end, JP Morgan, Discover and Visa devoted 2% to 3% of their budget to online advertising. On the other side, Capital One, Citi, and Progressive all placed around the 9% mark.

Note:
1. Internet spend covers desktop display/search only. Does not include mobile or video ad units.