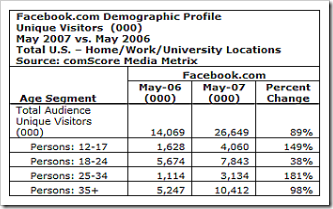 Due to Facebook's roots as a college-only social networking site, as recently as last year you had to use a .edu email address to gain admittance, it has remained a young person's playground much longer than MySpace. However, much to the chagrin of my college-age niece and her friends (note 1), Facebook has aged rapidly this year.

As you can see in the inset, in May, comScore reported that more than half of Facebook visitors were 25 or older (see full press release here and note 2). Using this chart, we estimate the median age of a Facebook visitor was about 23 a year ago and now it's closing in on 30 (I'd guess 27 or 28 based on the comScore data). Even more frightening for the younger set: last month there were 2.6 million more unique visitors over age 35 than in the 18-24 category. We noted this trend at MySpace last year (here).

Significance for Banks
As you consider your social networking strategy, don't think it's only for the under-25 crowd. Some of your prime customers, the 30-somethings with new families, new cars, new homes, and accelerating careers, also keep in touch with friends via social networks. Refer to Online Banking Report, Social Personal Finance, for a long-term forecast and strategic options for financial institutions. Also, see our earlier post on the Top-10 Banking & Money apps on Facebook here.

1. This summer, my niece, a college sophomore, couldn't believe that I had a Facebook account. And she was more than a bit skeptical of my claim that I was tracking the social network for my blog and newsletter. To her, it's a privileged place for her friends to communicate: uncles, aunts, and especially parents, are definitely not on the invitation list. It will be interesting to see what happens to the hip kids as the establishment invades their turf. The Wall Street Journal had a similar story this week about fellow workers and even bosses requesting to be added as friends in social networks (here).

2. comScore is reporting the demographic profile of visitors, NOT the active-user base, i.e., those that maintain profiles. Active users would undoubtedly skew younger.