SumUp, a European player in the mobile-based card reader and point-of-sale space, recently launched in Russia and has opened an office in Moscow.

In Russia, the SumUp card reader will support all major credit and debit cards, including MasterCard and Visa. Support for American Express is coming soon.

The Ireland-based company is now operating in 11 countries: 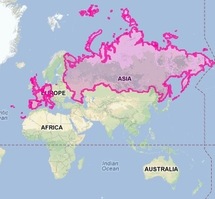 This expansion gives SumUp the largest geographical footprint (in pink, above) over other European mobile point-of-sale rivals such as iZettle.

Along with the Russian launch, SumUp announced a partnership with Svyaznoy Group to distribute SumUp dongles in almost 3,000 Russian retail stores.

Businesses can sign up for SumUp’s service in brick-and-mortar Svyaznoy stores and on SumUp’s website. The service provides native language assistance.

To learn more about SumUp, watch its FinovateEurope 2013 demo, where it won Best of Show.