Looking at the research, one is tempted to conclude that e-service is
less important than traditional phone and branch service. Customers are
relatively satisfied with their phone and face-to-face experiences at
financial institutions. According to Forrester, the traditional channels
enjoy an average satisfaction rate of 80%, nearly four times the rate of
e-service options which were in the low-20% range. Only the much-maligned
IVR (automated phone) service was lower at 12% (see Table 6, below).
More recent research shows that the Web is gaining ground in all areas
except problem resolution, where only 25% of respondents are satisfied with
the service received (see Table 7, below).

However, even though satisfaction trails other methods, online users
overwhelmingly prefer electronic channels when dealing with their bank. In
research released just this month, Vividence, a customer-satisfaction
research company, found that three times as many users prefer electronic
channels for service compared to the telephone. Jupiter Research also found
similar results in actual behavior at online retailers. It found that during
2002 year-end holiday period that three-quarters of respondents used email and
Web-based options in their initial attempt to contact an online retailer for
service (see column 1, Table 8, opposite).

Financial institutions should be enthusiastic about these consumer
preferences, given the potential cost savings. According to Gartner, email
service can save $2 per interaction compared to the telephone. Furthermore,
Web-based self service can drive costs down more than 80%, to less than $1 per
interaction (see last column, Table 8, opposite). As always, take these
research results with a grain of salt. It’s early in the learning curve for both
providers and users. Weaning users off high-cost delivery channels will be a
long-term process using both carrots and sticks. 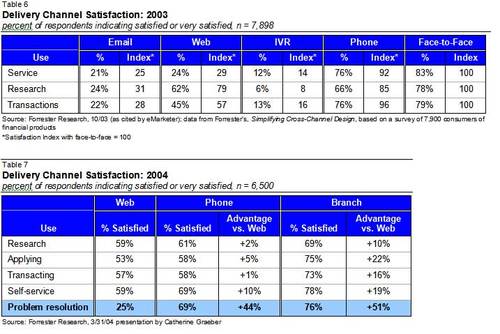 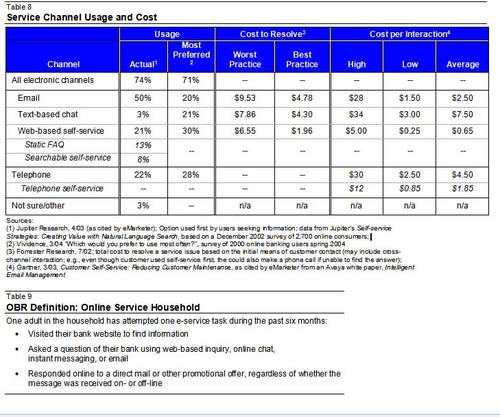 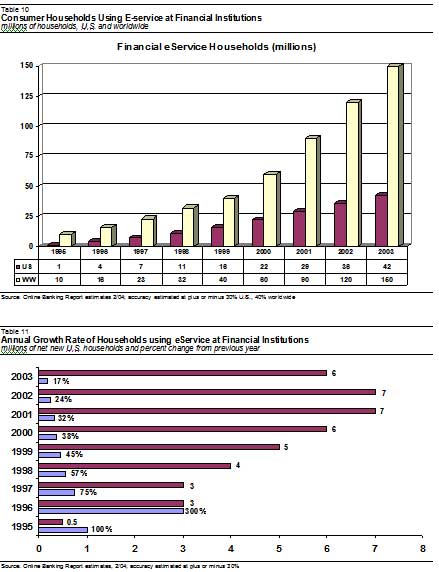