The Wall Street Journal, Crunchbase, and other sources are reporting that open payments protocol specialist, Ripple Labs, has raised $30 million in new funding. Although the company has not confirmed some of the details of the deal, participating investors are believed to be IDG Capital Partners, Google Ventures, and Andreessen Horowitz.

This latest infusion of capital follows successful angel and seed funding rounds which raised $9 million in 2013, and takes the company’s total capital to nearly $40 million. WSJ further reported that the investment puts Ripple Labs’ valuation at $100 million.
(Crypto Coins News helpfully compares this valuation to Ripple’s “primary value in XRP” to arrive at a very different figure.)
Ripple Labs developed the Ripple protocol, a distributed open source payment network that enables the real-time transfer of funds in any currency. The technology was deployed by Fidor Bank AG last May, and in September Cross River Bank and CBW Bank became the first U.S. banks to incorporate the Ripple protocol into its settlement operations. In January, Ripple Labs named Gene Sperling, former Chief White House Advisor, to its board of directors. 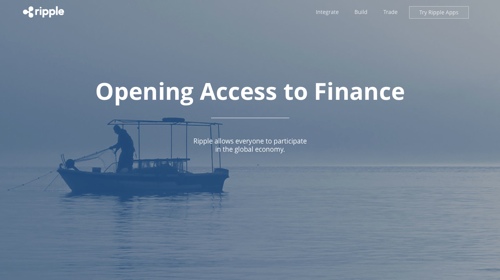 The investment comes at a time of resurgent optimism for digital and cryptocurrencies like Ripple. Recent investment in bitcoin exchange Coinbase, which opened its first U.S. exchange this week, has helped restore interest in the technology after the price of bitcoin dripped below $300 and fell to as low as $178.
Founded in 2012 and headquartered in San Francisco, Ripple demonstrated its technology at FinovateSpring 2013 in San Francisco. Chris Larsen is CEO.