Last century, serial entrepreneur Elon Musk launched what he expected to be a top-10 bank by now. And in true late-1990s dot-com fashion, it was simply called X.com. In retrospect, maybe not the best name for a bank, but it certainly was more memorable than First Security Bank of Whatever. The company soon merged with PayPal, dropped the single-letter name, and eventually took over the world of alt-bank payments.

For most of the past eight years, if you typed X.com into your browser, you simply ended up on the PayPal homepage. But recently, PayPal has opened a new area under the X.com URL called PayPal Labs. This is a place where competitors, developers, analysts, and anyone with too much time on their hands can see the latest new "beta" services under development at PayPal.

With just two services listed (see below), it's no Google Lab, but it shows that PayPal still has Silicon Valley DNA at its core, despite five years working within the shadow of the larger eBay brand.

My take: More financial institutions should open "lab sites" to demonstrate their commitment to innovation. The only one I remember was JPMorgan's LabMorgan, which was really was part VC, part incubator. But its URL only shows an error message these days, a shame.

In the PayPal Lab 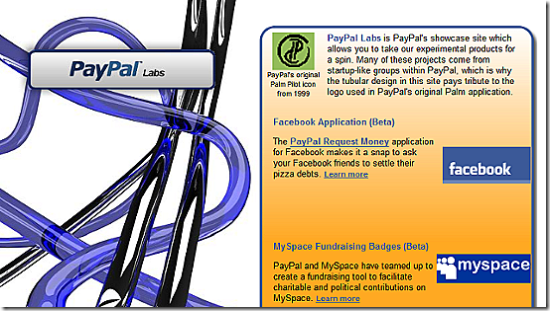