Today, cash payment network PayNearMe announced a $10 million round of funding along with the launch of a self-service Express option for merchants.

Express option
The new Express option for merchants is offered alongside Pro and Custom accounts that each provide different levels of service, including API access and receipt customization, as seen in the chart below. 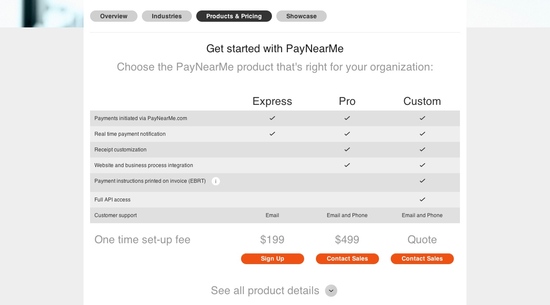 Along with a lower price tag, the Express option also benefits merchants by requiring less backend integration, so they can begin using the service in less than an hour without the help of IT staff. Setup requires banking information and unique data about each customer, such as customer number and address.

The new Express option opens the possibility for PayNearMe to serve a large number of small merchant accounts, as opposed to just a handful of large accounts, such as existing clients Greyhound and H&R Block.

To learn more about PayNearMe, watch its FinovateFall 2011 demo.