Precise, content-sensitive advertising is extremely powerful. It’s what made Google a giant.

In financial services, the biggest advertising-driven success (after BankRate and Google), at least in terms of market cap, is Mint.com. Its revenue stream is entirely made up of targeted offers to customers who aggregate banking transactions on its site.

The company wisely uses email to deliver some of the advertising pitches. As we’ve discussed before, Mint is of the few financial companies directly monetizing triggered alerts.

We were impressed by the latest effort received Tuesday (see below). Having noticed that our Chase business card was used internationally, incurring a $14 transaction surcharge, they wisely pitched us a Capital One no-foreign-transaction-fee card.

Interestingly, we already have not one, but two of those Cap One cards (personal and biz) and they are both aggregated at Mint. So I’m not sure if this alert is more of a reminder to use our Cap One charge when traversing the world or that Mint doesn’t check current product usage when cross selling (or they don’t care). If Mint is only paid on performance (eg. by new accounts generated), then it doesn’t matter to Cap One that they are marketing to an existing customer.

Bottom line: The example demonstrates the marketing value of hosting the aggregated accounts.

Mint triggered alert (12 June 2012)
Note: The advertisement is two-fold. The banner with "apply now" is the most eye-catching, but also easier to ignore. There is also a text call to action above it, that looks more like alert copy. It says: "Stop paying extra to use your credit card overseas. Get a card that doesn’t charge foreign transaction fees." 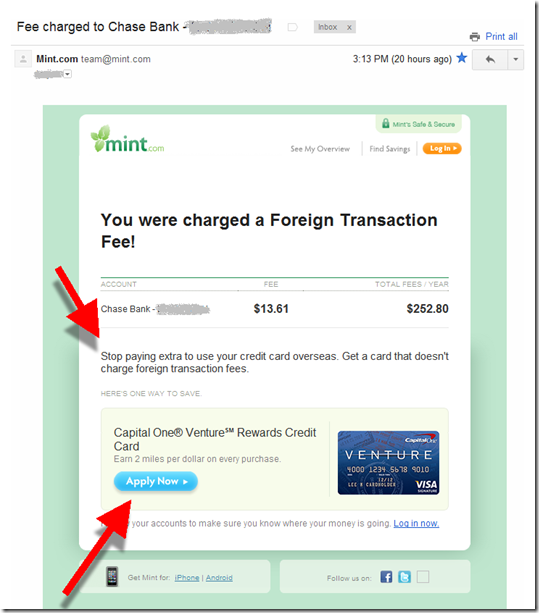