And like Lending Club, which launched its IPO last week, OnDeck saw its stock price above its anticipated range. Initially set for $16-18, shares of ONDK opened Wednesday morning on the New York Stock Exchange at $26.50 and traded as high as $28 by midday. 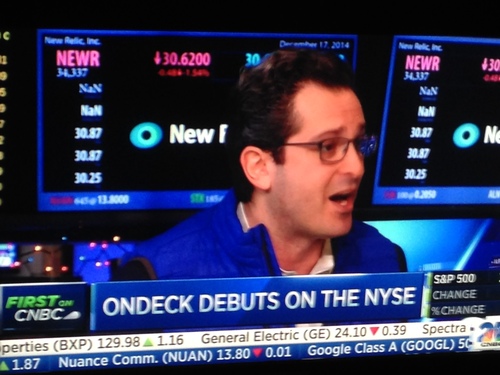 OnDeck was founded in 2006 and specializes in providing loans to small businesses that are typically underserved by traditional lenders. What makes OnDeck unique is twofold: first, the company believes its proprietary methods do a better and faster job of identifying true creditworthiness than methods used historically by financial institutions. Second, OnDeck’s lending capital comes from lines of credit secured from banks, as well as securization of its loan book.
We shared some interesting metrics on OnDeck in November when the company announced its IPO plans. Additionally, OnDeck’s loan originations have grown at a compound AGR of 127% from 2011 to 2013, and the company has experienced year-over-year growth of 171% in the first nine months of 2014. OnDeck has originated more than $1.7 billion in loans since inception in 2007.

Coming on the heels of the Lending Club IPO, OnDeck public debut is putting a spotlight on the variety of fintech innovation being brought to market. And while increased scrutiny from investors and analysts will present challenges, it will also provide an opportunity to stimulate greater attention, interest and investment in the industry.
Interviewed Wednesday morning on CNBC’s “Squawk on the Street”, OnDeck CEO Noah Breslow said, “It’s a signature moment for financial technology. Public market investors have had no real way to invest in the disruption that’s happening in banking. We think that both the Lending Club IPO and the OnDeck IPO represent in consumer and small business the two leaders in those respective markets.”
Lead underwriters of the offering were Bank of America, Deutsche Bank, Jeffries, JP Morgan Chase, Merrill Lynch, and Morgan Stanley. Based in New York, OnDeck was last on the Finovate stage in 2012 for FinovateSpring where it demoed its OnDeck Connect technology. This fall, the company participated in the inaugural FinDEVr conference in San Francisco, presenting its lending APIs.