It’s so refreshing to have some real numbers to go on, even if they are self reported. Aside from Prosper, Lending Club (here), and most recently SmartyPig (here), few of the startups we track provide meaningful metrics on their operations. That’s why we use Compete website traffic estimates as a proxy for success.

That’s not a lot, but we can make a few estimates from that info (note 2):

And for those of you who still want traffic numbers, MoneyAisle’s website usage (monthly unique visitors) has been trending upwards after suffering a post-launch dip in November. In December, visitors totaled just under 20,000. 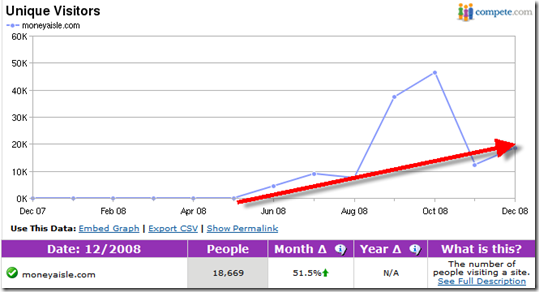 Bottom line: It’s a promising start for the company which earned an OBR Best of the Web this summer, was picked by the audience as Best of Show in October’s Finovate (video here), and was recently chosen as a top-10 innovation of the year in our most recent Online Banking Report (here).

When MoneyAisle adds integrated online account opening (powered by Andera), results should be even stronger.

Notes:
1. Deposit-generated total is 6% of total auctions run, because consumers are not obligated to make the deposit after they run the auction.

2. My speculative estimates, not provided from the company.