Last week, Moven launched its mobile money management platform to the public. Apparently, the New York-based startup has been busy because today it announced that its partnering with MoneyDesktop, which is known for its PFM platform that is so visually appealing it will make bankers drool.

This is good news for me personally since I’ve had difficulty syncing two of my outside bank accounts with Moven (see below). 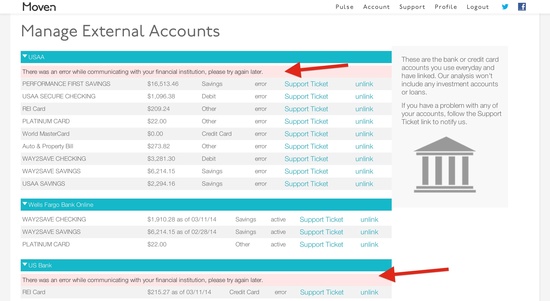 MoneyDesktop takes pride in its account aggregation. I caught up with MoneyDesktop’s Matt West last week at the Bank Innovation conference in Seattle, and he asserted that, regardless of what the front end of MoneyDesktop’s budgeting platform looks like, the real value is in the integration. MoneyDesktop is able to compete with giants like Intuit and Yodlee because it categorizes 98%* of the transactions correctly.

Moven joins the 400+ other financial institutions and the 29 online banking, core and payment network providers that use MoneyDesktop’s API for account integration.

To see the companies in action, check out Moven’s FinovateSpring 2013 demo and MoneyDesktop’s most recent demo from FinovateFall 2013.

*This number represents the success rate of transactions being categorized correctly after they’ve gone through MoneyDesktop’s complete system. It comes from a sampling of transactional data pulled from across the U.S.