Today, Wilson Bank & Trust formally launched Utah-based MoneyDesktop’s PFM, which has been available to all account holders for free since March.

The Tennessee-based bank says the PFM is already gaining popularity, with more than 25% of its nearly 20,000 active online banking members* having used the tool in the first 3 months.

Executive vice president of Wilson Bank & Trust, John McDearman, says that the bank spent 12 months researching different PFMs and selected MoneyDesktop in order to create a “wow” experience for customers. The bank has driven adoption by marketing the PFM via email, online, and inside its 25 branches located throughout middle Tennessee. 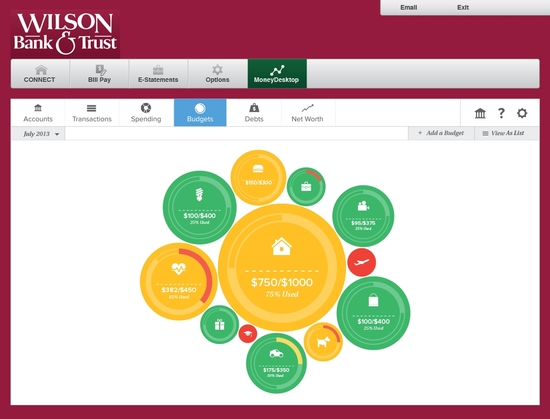 To get started, users log in with their existing online banking credentials. Their use of the PFM is tracked through a separate server once they start using the features.

In addition to providing the PFM, the bank, which has more than $1.7 billion in assets, also announced it is using MoneyDesktop’s Insight & Target products that it revealed at FinovateSpring in May (see demo video below). It is one of the first financial institutions to take advantage of these services.

The video cannot be loaded as your browser does not support JavaScript.