The FDIC database has been updated with Q4 numbers, allowing all the data miners to slap on their hard hats and get to work. Since reporting on the tepid third quarter of ING Direct (U.S.) (here), we've been looking forward to the year-end data.

The biggest surprise is that the bank not only reversed the Q3 account run-off, it managed to add 220,000 new accounts, its best fourth quarter ever. However, things weren't so rosy in terms of deposit balances, which increased just $800 million, the lowest Q4 increase since 2001 when the bank had less than $3 billion in total deposits.

For the full year, ING added $7.2 billion in deposit for an 18% increase, the first time the bank had less than 40% year-over-year growth. And almost the entire increase came in first quarter. The bank essentially had no deposit growth in the final nine months of the year (see table below).

It will be interesting to see what impact its new high-rate Electric Orange checking account will have on deposit and account growth. The account was growing rapidly during the final stretch of the invitation-only launch period, growing from $1 billion on deposit Dec. 31, to $2.2 billion by mid-February (see coverage here). 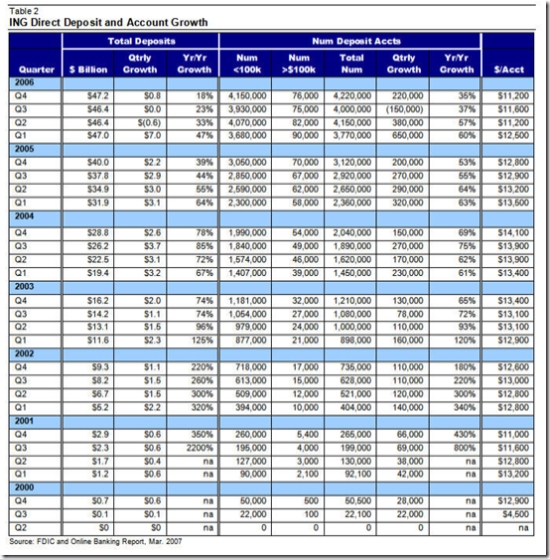