I don’t know how long First Arkansas Bank & Trust has had a big Facebook-like image dominating its homepage (see below), but it’s timely given all the attention the social network has received of late. Despite a little blip with the IPO, Facebook is one of most significant brands on the planet. So associating your financial brand with it is a good move.

FAB&T is using the homepage to create awareness of its four social network outlets:

The huge Socialize With Us image is eye-catching and would garner a fair number of clicks, except for one problem. The entire center graphic, including the social media icons, are not clickable. The only way to get to the sites is to click on their icons in the upper right corner of the homepage (note 1). This is a strange design decision.

Bottom line: While I like the approach of exposing all the trendy social media icons, I’m not sure FAB&T should be sending people to all four. The bank’s Facebook page is good, with a modern design, frequent updates, and 755 fans (see second screenshot). So, it makes sense to encourage users to visit and like it.

However, the other social media sites are a little anemic. The blog hasn’t been updated since the end of 2011; there has only been one tweet in the past 2 months; and the YouTube channel has limited content.

Like most financial institutions, FAB&T would probably be better served by focusing on Facebook (note 2) and letting the other sites go, or at least stop referring customers to them from the homepage. 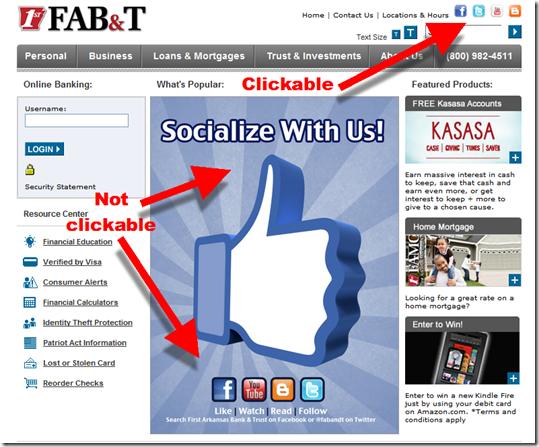 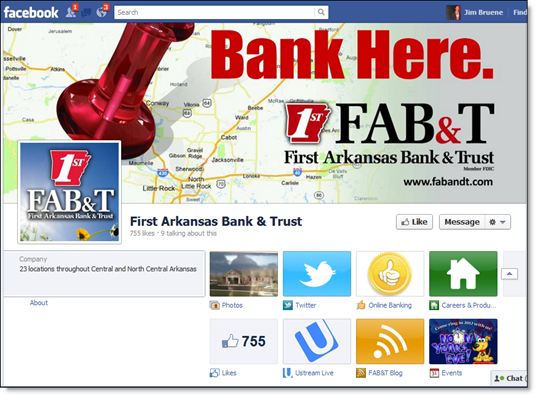 First Arkansas Bank Twitter page (link)
Note: The bank had one tweet in May, zero in April and a couple in March. 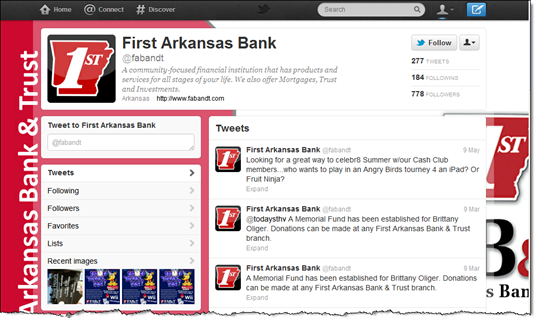 First Arkansas Bank Blog (link)
Note: The last post was almost six months ago. And the site is hosted on the Google’s free blogging platform, Blogger, which doesn’t really do much to help with the brand image. 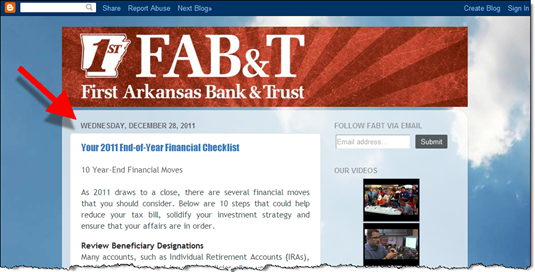 1. And those all require users to click through a "third-party warning" before redirecting the user to the social network sites. That further gums up the user experience.
2. See our Online Banking Report "Banking in Facebook" published in Feb. 2012 (subscription).