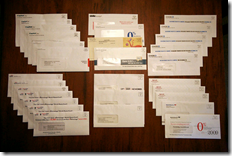 Did your recycling bin feel a bit lighter last quarter? According to Mintel Comperemedia, financial service direct mail was down 10% in the latest quarter:

I’d like to think that online marketing has turned the corner and is finally making a dent in traditional direct marketing. But it’s probably more likely that card companies, using stricter underwriting, simply had 14% fewer credit-worthy prospects. Plus, a few more people are opting out of snail mail (see note below).

Assuming 80 million credit-worthy households in the United States (out of 110 million total), the average household received 53 mailings in first quarter. If you are prime or alt-prime credit, you likely saw little-to-no change in your junk mail pile.

Note: photo credit
Proving once again that you can find anything online, the picture above is from Jason Carter’s blog where he is collecting credit card offers. This is his first-quarter haul, 23 for his wife and 7 for him. While that is slightly below the national average, Jason has been actively opting out of direct mail offers, so it is not a representative example.