I was searching Twitter today to see if any major brokerages were using it to reach out to customers. The only hit was E*Trade which is using Twitter to update its Complete Savings Account rates. It seems to be coming from the bank, but it's possible someone else, perhaps an employee or fan, is responsible for the two entries: the first on March 12 announcing a 3.45% yield and then on April 1 when the rate dropped to 3.01% (note 1).

Regardless of who's responsible, it makes sense to use the new channel for outbound communications. If nothing else, the 90 seconds spent creating those two entries have already generated a favorable mention in this blog.

For those of you not familiar with Twitter, it's a communications tool that allows users to post short (140 characters max) updates about what they are doing, what they are thinking, or anything else. Unless the user chooses to make their updates private, anyone can read them, just like a blog post. That's why Twittering is sometimes called micro-blogging. But it's more like "broadcast instant messaging" for most people who's musing will be seen by just a handful of friends, family and/or colleagues. 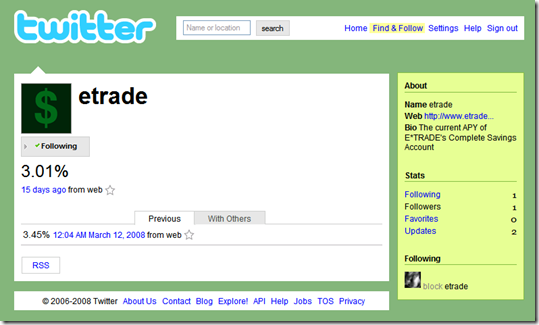 1. I suspect it's an "unofficial" Twitter page because they didn't put APY behind the percentage, although that is spelled out in the short bio section in the upper right, and they are not using the company logo.