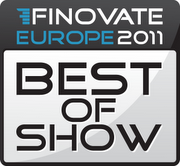 It was a fantastic day at the first FinovateEurope as 35 banking and financial technology companies debuted their latest innovations in front of a packed house. It was the first Finovate without at least one demo blowing up, though there were a couple close calls.

At the end of the day, attendees voted for their three favorite products. The four leading vote getters were named FinovateEurope “Best of Show” (see notes on methodology).
Every company that presented was named Best of Show by some portion of the audience. But the ones that ended on top today were as follows (in alphabetic order):

Congratulations! And thanks to everyone who presented, sponsored, attended and followed the @finovate tweets.

1. Only audience members not associated with demoing companies were eligible to vote. Finovate employees did not vote.
2. Attendees were encouraged to note their favorites as the day went on. Ballots were turned in at the end of the last demo session. The exact written instructions given to attendees:
“Please rate (the companies) on the basis of demo quality and potential impact of the innovation they demoed. Note: Ballots with more than three companies circled will not be counted.”