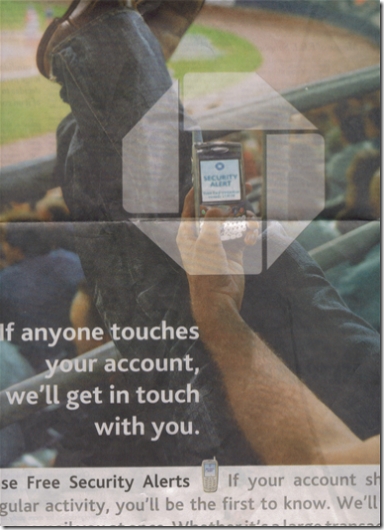 The camera looks over his shoulder, focusing in on the image displayed on his Treo smartphone, which says "SECURITY ALERT" in large white letters on a light-blue background.

You had to feel for this poor guy, jarred from his leisure time with an urgent missive from the bank. Within a few seconds, three things likely crossed his mind:

1. What the (expletive deleted)? Pretty poor timing to be interrupted at a baseball game with a security alert from the bank (which, these days is 99.9% likely to be a false positive, or a phishing attempt, see number 2).

2. Is this even from Chase? How do I know it's not a new kind of mobile phishing attach (mishing?). Should I ignore it? Does my liability go up if I don't respond immediately?

3. Now what? Can I click the message and find out if this was just a notification that I'd used my debit card to buy beer at a Yankees game, something I'd never done before, or has someone just transferred my 401k to a numbered account in the Jersey Islands? Or will I have to excuse myself and make a voice call, spending the 6th and even part of the 7th inning, talking to a Chase CSR, who may not even have enough info to explain why I got the alert?

Analysis
The ad demonstrates the pitfalls of using a very negative attribute, security breaches, in marketing your brand. But despite the uncomfortable thoughts that come to mind, we think it's an effective ad because it grabs attention and positions Chase as caring for the financial security of its customers. However, given that Chase's actual alerts look nothing like this, it's a bit of a stretch. I suppose they're allowed a bit of creative license; it's advertising after all.