Next week, I'll be interviewing Virgin Money USA CEO and Founder Asheesh Advani on stage at the Online Innovations in Financial Service Marketing Conference hosted by the Net.Finance (World Business Research) folks in New York City. Our main topic will be "Why consumers aren't buying mortgages online, yet," but I'm sure we'll cover the entire person-to-person lending spectrum in our 35-minute session Thursday morning (24 Jan).

If anyone has any questions for Mr. Advani, leave them in the comments here, or email me. I'll post the response here next week.

With the majority of U.S. banking customers accessing the Internet via broadband, there is no longer any reason to restrict content to simple HTML. The success of YouTube and other video sites shows that consumers are more than willing to watch online video under the right circumstances.

Here are three ways to use video in your online marketing:

1. Viral marketing: Financial institutions are unlikely candidates to make a great impression on YouTube. More likely, any video involving a bank that happens to make the most-watched list will be satire. For example, the BofA/MBNA merger cover of U2 was big last year, with more than 500,000 views if you count the parodies of the original (here). But "good" viral marketing can happen.

2. How-to educational clips and demos: Flash animations and other interactive techniques have long been staples of online demos. Although they can cost a bit more, adding audio and video explanations to a screenshot-based demo can make them more effective. For example, CashAdvance.com does a good job explaining the process of requesting an online advance with the spokesperson at right (see here). CashAdvance provides the ability to "turn the guide off," an important option for those who prefer a quicker trip through the demo.

3. Video as primary navigation: This is an entirely new use of video we haven't seen much in the financial services area. Instead of burying video and flash deep in "learn more" areas a few clicks off the main drag, companies such as consumer money-transfer specialist iKobo (see screenshot below) have replaced much of the HTML in their websites with audio-visual presentations. It's riskier, but if done right, it can be very effective, especially for more difficult financial information, such as international remittances, the core of iKobo's online money-transfer service. 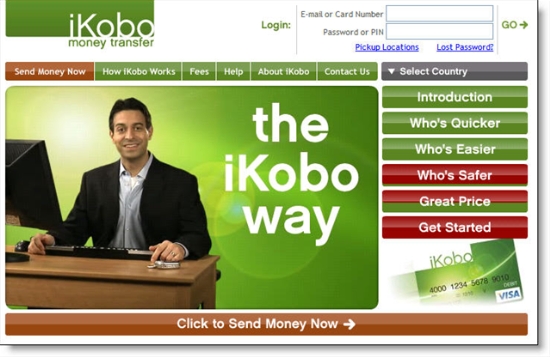 How to do it right (or not)

The key to good Web-based video is speed. YouTube has forever altered the perception of how long one should wait for on-screen video to play. Even during the middle of the day on a popular clip, the first visual appears in less than a second and about a second later, the video starts; it's basically instantaneous. It's not DVD quality, or even close, but speed is generally far more important that screen resolution or size, especially for a sales pitch or demo. That's why the iKobo site (above) works so well. The mid-page videos usually take no more than a second to begin playing, less time than it would take for a new static HTML page to load. 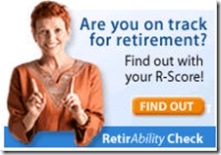 Compare that experience to the Nationwide Insurance's new RetirAbility Check. The new tool was discussed last week at the Net.Finance conference (see our coverage here and screenshots below) in a joint presentation by Susan McManus, AVP Internet Corporate Marketing, and Eric Cantini from its rich-media vendor, Brulant.

The tool is well conceived and looks stunning in a Powerpoint demo. And for those willing to commit up to 10 minutes to the process, it should help them learn more about the important topic of retirement planning. Depending on their answers along the way, eight short video clips are selected from a library of 235 and played for the user. Users are matched with an on-screen educator that coincides with their age and gender.

The video clips are well done with believable dialogue and good acting; however, I found the entire thing a bit too slow and too cumbersome. Had I not been researching for this blog, I don't know if I would have made it all the way through. But the insurance company has added a clever incentive that might have kept me at it. Users receive a "score" at the end of the process designed to show how will prepared you are for retirement. It adds a bit of intrigue to the tool, motivating the highly-competitive American to keep at it to see if he or she is a retirement "winner."

And despite my reservations, it seems to be working. The company said that 68% of users who click START end up completing the tool even though it can take as long as 10 minutes to complete, and rarely less than 5 or 6 minutes. However, during a 6-week period after its 20 Oct 2006 launch (press release here), the company awarded more than $100,000 in prize money, including a $50,000 grand prize, for those completing the tool and entering the sweepstakes (see contest rules here). That has likely goosed the "finishing" number considerably. Currently, the tool is reached via a link on a homepage list (left side), or from the Retirement section.

Unfortunately, the results of the RetirAbility Check cannot be stored online. Nationwide will email the results, but there is no way to come back later and see how your score has changed. Nor can you go back into the tool and change your answers to do "what-if" calculations on your savings or income. The company says it hopes to upgrade the tool so that it ties d
irectly into a secure area where users can return and see how their score changes over time.

The company might want to consider a low-bandwidth version for those with slow Internet connections and/or short attention spans. I doubt I'm the only one who would prefer to run through the retirement calculator in the more normal 45-second pace and skip the video rah-rah. 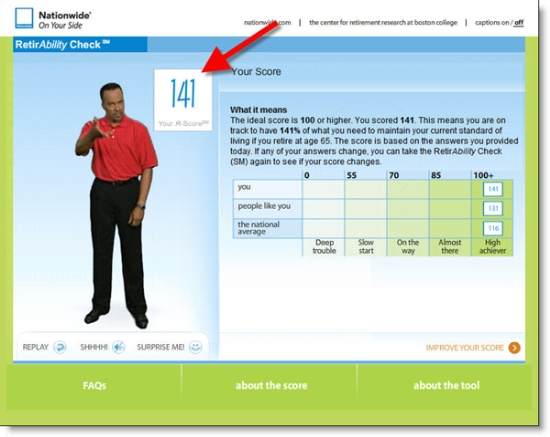 Advice on improving your score 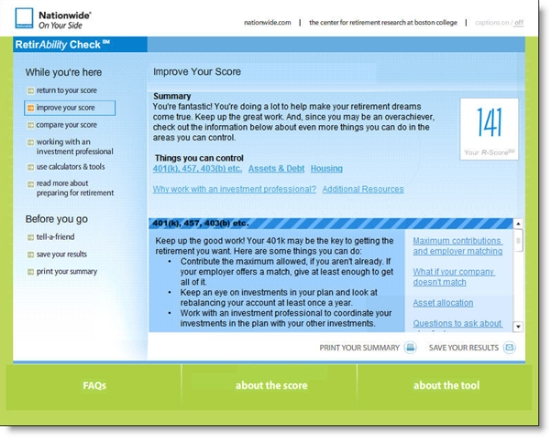 At WBR's Net.Finance conference yesterday, Jon Kaplan, head of Google's Financial Services Group, showcased ways to work with Google that were NOT related to search. He showed some cool and free ways to showcase your brand on Google Earth, Google Gadgets, Google Calendar, and more. We'll look at those in future posts, but by far the most entertaining example is Intuit's refreshingly creative TurboTax Rap promotion.

The company sponsored a contest that ended on the traditional U.S. tax day, April 15, that offered a top prize of $25,000 to the best YouTube video featuring TurboTax. Intuit also gave the first runner-up $5,000 and the third place video $1,000. And anyone who uploaded a video entry received a free copy of TurboTax. Intuit hired 1980's rapper Vanilla Ice to do the intro and announce the winner.

To promote the contest, Intuit created a special-purpose website (see screenshot below) and built a YouTube page (see below). The winning entry, showcased on Intuit's YouTube page, has more than 250,000 views. That's enough to put it on YouTube's most-viewed page (currently, it's number 13 on this week's most viewed), which really turbocharges the viewership. In comparison, the two runner-ups have less than 9,000 views.

This is brilliant work by Intuit. Although it was a costly promotion, it was still less than a major print buy and more importantly, it introduced the TurboTax brand to a whole new group of younger customers who'll be buying tax software for many decades. It will be interesting to see if Intuit makes this an annual event. 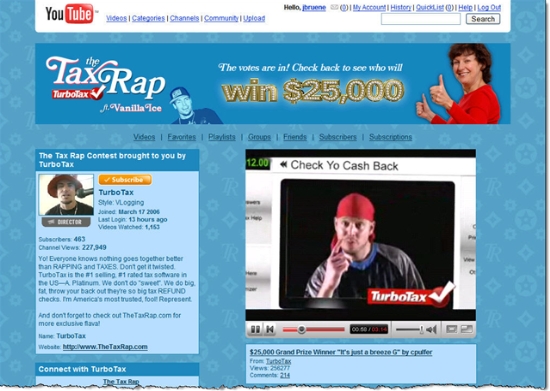 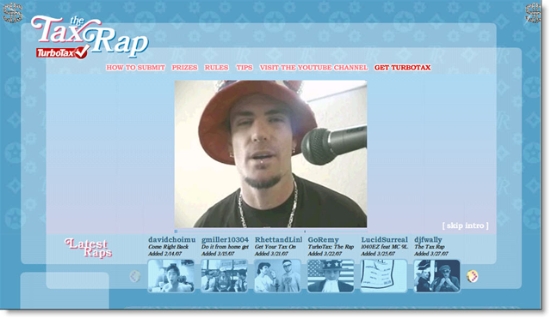