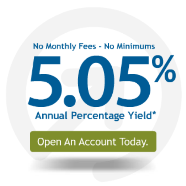 The numbers were chronicled in a NY Times article earlier this month (here) about the so-called rate chasers, depositors that move money around online seeking the absolute highest rate, even if it means moving the money many times each year.

Deposits of the mega-depositors: approx $1 billion

Now that the 6% APY has dropped to 5.05% (effective Sep. 28), it will be interesting to see how many deposits the bank retains.

The battle for online savings deposits has another entrant, First National Bank of Omaha. The new effort, branded FNBO Direct, launched in January according to Wikipedia and other sources. It's the second new direct bank of the year, following Direct Huntington earlier this month (see post here).

Both banks offer virtually identical products. DH pays 5 basis points more, but that's only $5 more per year per $10,000. FNBO has a $1 minimum, while DH wants $1,000 to open. Both use the CashEdge instant account-opening suite, on which we've commented before (see here).

Although, FNBO Direct clearly discloses its parent bank, the new savings account is completely separate from other First National Bank of Omaha accounts. It cannot be opened in FNBO branches, nor can it be linked to FNBO online banking.

FNBO Direct is not currently advertising at Google, Yahoo or BankRate. 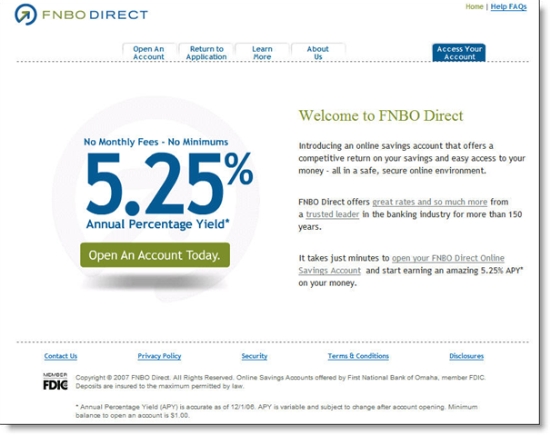 *Yet another direct bank

In the fight against financial fraud, it's a simple technology that is proving one of the most effective deterrents, as well as being a cost-cutting tool that builds customer loyalty.  Thanks to the incredible reach of SMS, its simplicity, and the fact that it is the most accessible messaging technology in the world, banks are introducing text messaging as an added layer of security for their customers to tackle the problem of identity theft.

In South Africa, for example, First National Bank (FNB) <fnb.co.za> claims that its SMS service, called inContact, has not only reduced fraud by 43%, but also has brought about increases in Internet-banking security. Client retention has increased by 15%, and call center costs have been reduced. With 22 million messages sent every month to more than 1.1 million subscribers, FNB is the largest single sender of text messages in the country, responsible for 26% of all messages.

Like FNB, a growing number of banks are realizing the power of the text message, and SMS is being introduced as an added layer of security for their customers. By simply receiving a text every time a transaction takes place, money is transferred, or an account is accessed, customers have immediate visibility of their account and can alert their bank about any suspicious activity.

The “soft” benefits are enormous as well. Banks can’t operate without a high level of credibility. Customers have to trust banks to trust them with their cash, their money management and their credit. FNB’s efforts have gone a long way to building and maintaining this level of credibility and trust. In addition, SMS brings the bank closer to its customer: It shows that the bank is innovative and at the forefront of best banking practices, and it raises brand awareness. SMS is not just a technology for FNB; it’s another channel to the customer just like its branches, ATMs, the Internet and telephone banking.

This is not just a South African trend. Spanish bank Bankinter <bankinter.com> has launched an SMS-based service to inform people each time their bankcard is used. A system warns the user via SMS of each banking operation made with the card. If the customer has not initiated the transactions, the card can be canceled immediately.

An article in Australia’s Herald Sun Business Daily cites an internal report from the National Australia Bank (NAB) <national.com.au>. The bank is concerned that it is losing AUS$1 million (US$760,000) due to Internet banking fraud. As one of its initiatives to reverse this, the bank has launched an SMS system to provide PIN-protected access to Internet banking services. According to the report, executives at the bank predict that online fraud will be reduced by 90% once 90% of customers have signed up for the scheme.

SMS and consumer behavior
It is the very nature of SMS and mobile phone use that contributes to these success rates. People have their mobile phones with them, wherever they are, and typically welcome the SMS security initiative as it means that both the customer and the banks are responsible for account security. The proactive alert makes life far more difficult for the criminal. If the losses through fraud of the financial industry can be reduced, then ultimately the customer could benefit from lower charges.

Never intended to be a commercial product, SMS has taken the world by storm. Mass implementation by mobile operators happened in the early 1990s, and the spread of inter-network roaming agreements provided the momentum to drive SMS take-up and make it a true mass market messaging service. According to Portio Research, 761 billion SMSs were sent in 2004 – that’s more than 100 messages for every man, woman and child on the planet.  Portio estimates that worldwide SMS traffic volumes will grow to 2,379 billion in 2010.

With the benefit of hindsight, the success of SMS is not surprising. It is simply an ideal form of peer-to-peer communication: cost-effective, with exceptionally high reach. As a marketing tool it demonstrates a very high response rate of up to 82% for branded campaigns and an average of 16% for other campaigns. It is immediate, reliable and personal. Messages can be customized to appeal to individual groups. Communicators can automate message sending and receive detailed reporting on activities. It is the accidental cash cow of the cellular industry, and the strength of its very simplicity is being leveraged by increasing numbers of businesses worldwide.

Pieter de Villiers is the CEO of Clickatell <clickatell.com>, a mobile messaging provider that allows businesses to connect people anywhere, with any message, across any device. Clickatell is headquartered in Redwood Shores, Calif., with offices in South Africa and the United Kingdom.