I love startups. Just when you think you’ve seen everything, along comes someone doing something that no one would have ever thought of five years ago, or in this case one year ago.

The latest inspiration: Blippy. The service allows you to automatically broadcast your credit or debit card purchases using the Twitter/Facebook model (see screenshot below; note 1).

The first question everyone asks is why? (see comments at TechCrunch) But really, it’s not much different than broadcasting personal details via Twitter or your whereabouts via Foursquare, especially if you limit viewing to friends. The founder, serial entrepreneur, Philip Kaplan explains in the TechCrunch interview, that he has one credit card for “social purchases” broadcast on Blippy and another for purchases he prefers to keep private.

The use cases shown so far are centered around media purchases, for example using it to automatically tweet (blip?) what song or movie you bought on iTunes or social “check ins” where the service lets people know you just bought coffee at Starbucks. But I can see where it would be helpful for spouses to “broadcast” purchases only to each other. Or for a salesperson to broadcast their purchases to their assistant to build expense reports on the fly.

The service is in closed alpha (only in use by a handful of friends and family, note 2) as the three-person company gears up for a launch. You can follow Kaplan on Twitter (@pud) for more info.

My take: I like the idea of easily sharing purchases with joint-account holders or a bookkeeper. But many (most?) online banking systems and PFMs already allow this through the alerts system. You may want to boost education efforts on this capability.

As for Tweeting about songs downloaded via iTunes, wouldn’t most users prefer to maintain more control over that by simply using Twitter or Facebook to directly type a short note? But we know from experience, if there’s a way to do something with less effort, it stands a good chance of succeeding.

I’m not expecting widespread adoption any time soon, but I think there is a market for sharing spending transactions.

Here’s something for innovative FIs to consider: Add a “share this” button next to credit/debit card transaction and let users send the info via email, Twitter or Facebook with a couple keystrokes (see inset from FiLife).

I know it sounds far-fetched, but it might be just the thing to make your card stand out with heavy users of social media. 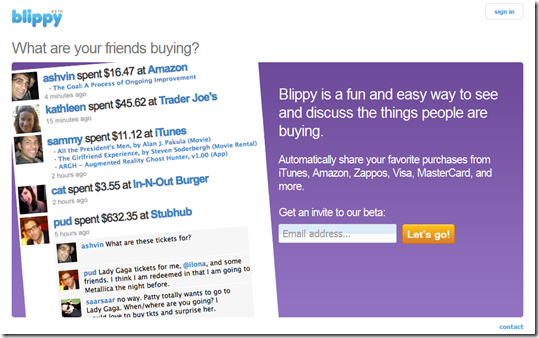 Note:
1. For more info in Twitter, see our Online Banking Report on the technology published in May.
2. Twitter’s Evan Williams is using Blippy as shown in screenshot taken by CNET’s Rafe Needleman in his article earlier this week.