In 2006, we predicted that every major bank and credit union would someday have a blog (note 1). That prediction was looking downright awful until Twitter came along. The popular, and much-hyped service, is part blog, part social network, and part text-messaging.

Financial institutions have embraced Twitter much faster than blogging because it’s low cost, drop-dead simple to implement, and relatively cost-effective to staff and manage. Our good friend, Christophe Langlois, who has been tracking social media implementations at Visible-Banking for several years, has identified 120 financial institution blogs worldwide. In comparison, Christophe is tracking more than 700 Twitter accounts. Similarly, Jeffry Pilcher’s exhaustive Twitter directory at The Financial Brand lists about 600 Twitter accounts in use by financial institutions.

Although Twitter can successfully be used as a simple one-way broadcast medium (i.e., microblog), it’s also a powerful two-way and group communication service (note 2). Wesabe, in 2008, and Xpenser, earlier this year, were the first online PFMs to leverage Twitter for posting transaction info to user accounts. But St. Louis, Missouri-based Vantage Credit Union took that one step further by allowing users not only to query their accounts, but also to move money between them.

At the core, Vantage CU’s Twitter service is little different than hundreds of SMS/text-message mobile-banking services already in use around the world. But for Twitter users, it allows account queries from anywhere a Twitter client is loaded: smartphone, laptop, or desktop (note 3). 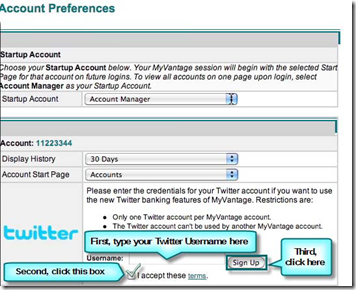 Vantage CU posted videos showing how it works. But if you are a Twitter user, you can skip the tutorial. You’ll understand right away: After signing up for the service at Vantage (inset), simply follow the CU on Twitter (@myvcu) and send them a direct message whenever you want to see your balance, recent transactions, or to initiate a funds transfer.

While the process is relatively intuitive for Twitter users, the command-code language limits the usefulness. The results look like a throwback to the DOS command line circa 1985 (see first screenshot below). It would be much simpler if the CU offered plain English commands and account nicknames, e.g., “transfer $500 from wifechecking to mychecking” instead of “#trans f9 t0”. Ideally, the CU would support short codes for its power users and plain English commands for everyone else.

That said, it’s pretty simple to remember how to make a checking account balance inquiry, “#bal 9” (9 is the code for checking), which is the primary way the service will be used. 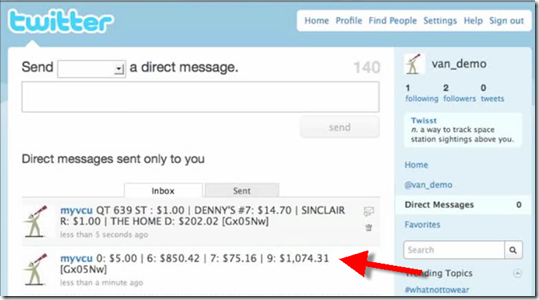 Website implementation
Few members will actually use Twitter banking, at least initially. The main reason to embrace Twitter is for the publicity and brand value, especially when you are first.  Vantage takes full advantage of its first-mover position, placing a headline on its homepage, along with a Twitter feed directly below.

Other things Vantage CU does right:

The PR value alone should more than justify the expense of Vantage CU’s Twitter service. And if Twitter continues to work its way into the fabric of consumers’ daily lives, the service could attract a decent following.

In keeping with our 10-year tradition of recognizing new online “firsts,” we are awarding Vantage a 2009 Best of the Web award (note 4) for being the first in the world with full-service Twitter banking. 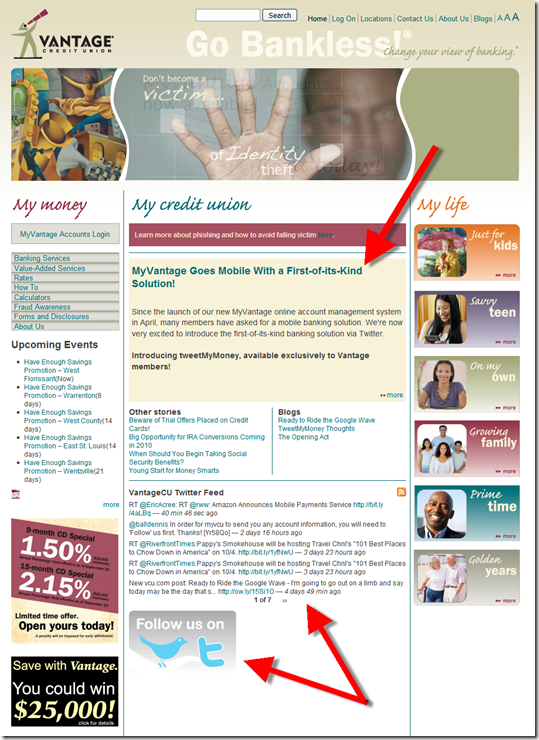 Notes:
1. See our Online Banking Report: Bank 2.0 (Nov. 2006).
2. For more info, see our Online Banking Report: Leveraging Twitter (May 2009)
3. However, text-messaging users would likely prefer to make balance inquiries directly from their phone’s SMS function, rather than t
aking the time to open the Twitter app or website. The most likely user is someone already using Twitter who decides to do a quick banking inquiry while Tweeting.
4. OBR Best of the Web awards are given periodically to companies that pioneer new online and mobile banking features. It is not an endorsement of the company or product, just recognition for what we believe is an important development. Vantage Credit Union is the 75th recipient since we began awarding it in 1997.