It’s been 13 years since email bank-account alerts first appeared in the United States (see note 1). And for 12.99 years, users have wished they could just reply back to the message to cover a checking account shortfall. 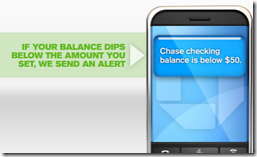 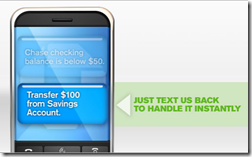 While we would have been more impressed if the service covered the more common email alerts, the new feature does move the online/mobile banking state-of-the-art up a notch. That’s enough to earn Chase the second OBR Best of the Web awarded in 2010 and the 77th all-time (notes 2, 3).

The bank is promoting the new feature via Google AdWords (see screenshots below). And, they’ve done a good job identifying the key benefit in the landing page title:

I don’t see any mention of the new capabilities on the Chase homepage today, nor does it appear to be touted within online banking (note 4). However, a site-search for “alerts” drives users to the landing page shown below.

Advertising on Google search for “Chase email alerts”
(2 June 2010, 9 AM from Seattle IP)

Landing page (link)
Note: The top graphic is animated, showing how the alert and reply work (see images at the top of this post) 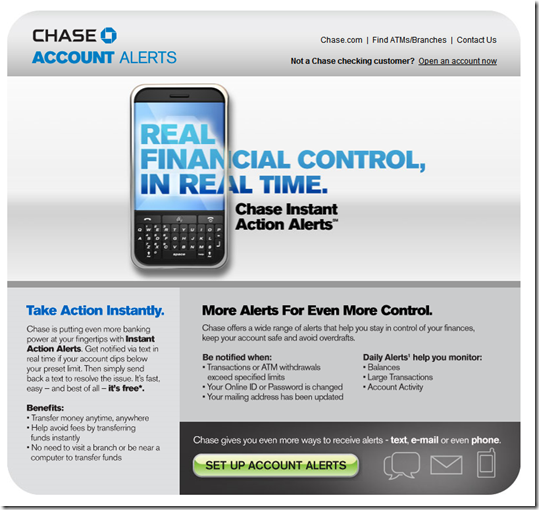 1. Signet Bank was the first major to offer email account alerts. We covered it in OBR 22 (Feb 1997). We didn’t learn until a few months later that community bank Britton & Koontz actually beat Signet to market with alerts launched in the summer of 1996.
2. You could argue that Chase is not first with this capability. The handful of U.S. text-banking programs that support transfers are already offering the same capabilities as Chase (for example, see text commands at Natco Credit Union).  However, Chase is the first major bank to provide the functionality, as well as the first to really promote the reply-back function as a major benefit.
3. OBR Best of the Web awards are given periodically to companies that pioneer new online/mobile banking features, products, or enhancements. It is not an endorsement of the company or product, just recognition for what we believe is an important development that “raises the bar” in alt-delivery. Chase’s Instant Action Alerts are the 77th recipient since we began the awards in 1997. It’s the second for Chase. The bank also won in 2007 for being the first major U.S. bank to roll out text banking. For a list of the top innovations of all time, see our January 2010 Online Banking Report.
4. It was not mentioned within my business banking account or consumer credit card account. I don’t have a Chase consumer checking account.
5. For more information on alerts and messaging, refer to this Online Banking Report published in 2003.