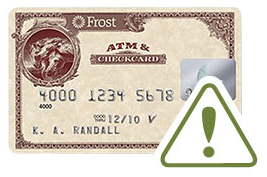 Frost Bank is cool. The $25 billion regional bank has long been an innovator, pushing forward on multiple digital fronts (see notes 1, 2). Its latest innovation quietly rolled out to customers at the beginning of May, is the two-way actionable debit card alert. This service probably seems like a no-brainer to customers, especially those born after 1990, but it’s not at all easy for an FI to pull off.

While Frost is not the first to position alerts as a two-way communication channel (note 3), it is the first to allow customers to simply reply back to a text message to freeze their debit card against further charges. The action also triggers a call from a Frost banker to resolve the situation.

Because this “raises the bar” for proactive customer communications around debit card use, we are awarding it our first Best of the Web for 2014 (note 4). 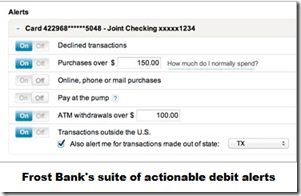 1. Consumer establishes alert thresholds and preferences (inset)
2. Bank sends triggered text-message alert
3. If the user suspects fraud, they reply back with the code provided in the alert (screenshot below)
4. Frost puts a temporary hold on the card
5. Frost banker calls customer and resolves (customer can also unblock account on their own) 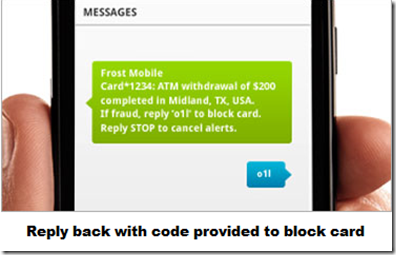 But I do have some concerns there will be too many false alarms generated. It is so easy to forget pre-authorized debits; be surprised by charges made by your spouse; or legitimate, but strange-sounding merchant names.

Ideally, there would be a way to first ask for more info on a charge, rather than a black or white hold. It would be great to text back “huh?” and get a plain language explanation of the charge, for example:

BillGuard offers quite a bit of this “explanation layer” on card transactions, another reason to be looking at what they are doing (most recent post). 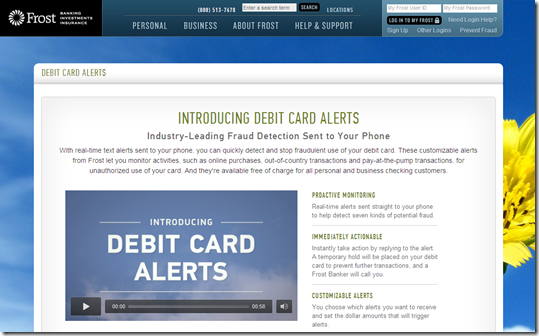 Notes:
1. We first covered Frost in 2005, when it was offering lifetime statement archives at a time when most banks dropped your data off the site after a few months (June 2005 post). We also loved their PFM-ish Momentum checking account launched in 2008, about the same time as Mint launched (July 2008 post).

2. Earlier this month, Jeffry Pilcher called Frost Bank “… one of the most beautiful brand identities … .” (see right, post)
3. In 2010 (post), Chase Bank won Best of the Web for its 2-way text-message alerts; however, that was limited to initiating funds transfers through its normal text-banking service.
4. This is the first OBR Best of the Web for Frost Bank. Since 1997, our Online Banking Report industr
y newsletter has been periodically giving OBR Best of the Web awards to companies that pioneer new online- or mobile-banking features. It is not an endorsement of the company or product, just recognition for what we believe is an important industry development. In total, 91 companies have won the award. Recent winners are profiled in the Netbanker archives.