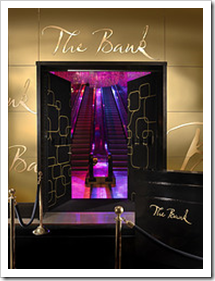 I’m not sure what BankSimple told investors, but it worked. The non-bank bank startup grabbed $3 million in VC money last week. The company is positioning itself as a tech company rather than a financial services provider, a smart move for valuations.

I finally caught up with co-founder Joshua Reich a few days ago. I came away from that conversation even more impressed. These guys are really trying to reshape the banking experience. They talk more like a credit union than a bank, meaning they are maximizing the customer experience instead of the shareholder one (see note 1).

Granted it hasn’t launched yet, but so far the “better experience” strategy is working wonderfully. The startup has a 20,000-person wait list for an account. Think about that, a waiting list…to join a bank. I never thought I’d write that sentence. If 75% convert to actual customers, BankSimple will have already hit its first-year goal. A nice problem to have.

And the beauty of so-called scarcity marketing is that you can use invite codes as a sort of virtual currency to reward existing customers and other influencers. BankSimple plans to use invite codes to encourage certain unspecified behaviors from existing customers. It’s a page out of the Silicon Valley playbook. Google kept Gmail invite-only for several years. There was a even a time where people paid real money on eBay for a Gmail invite. The same could happen at BankSimple.

Other things I learned:

Notes:
1. But clearly BankSimple is no nonprofit. The VCs are there because they smell a 10x return, not because they don’t like banking fees.
2. Photo credit: The Bank nightclub in Las Vegas.
3. Previous posts on BankSimple here.